Synopsis: On the eve of the 1997 handover, violence is rampant as the British Hong Kong government has joined forces with the triads to cause chaos in Hong Kong. The gang leader, Lam Yiu- Cheong (Simon Yam) assigns his crony Ah Lok (Richie Ren) to take an important role in the destruction. But Lok harbours a secret – he’s an undercover policeman and he’s about to discover a political conspiracy that will shock the country to its core.

There is plenty of reason to be excited about ‘Man on the Edge’. For one, it’s been a while since we’ve last seen a triad drama, which used to be one of the defining genres of Hong Kong cinema. For another, it’s been even longer since one with as packed and star-studded a cast as this, including the likes of Ritchie Jen, Simon Yam, Jerry Lamb, Patrick Tam, Alex Fong, Sammo Hung, Karena Lam, Cheung Siu-fai and Kenneth Tsang. Yet as satisfying as it is to see these veterans reunited onscreen, this pre-Handover set thriller is undeniably underwhelming, given how all that acting talent is ultimately undermined by slapdash plotting and insipid execution.

That such a heavyweight ensemble had agreed to participate in this movie is testament to its potential, and indeed, there is certainly no lack of ambition in veteran action director Sam Wong’s sophomore directorial outing. Co-written by Wong with the questionable Mainland Chinese duo Yan Ma and Yan Wang, the story is a tale of brotherhood, a corruption saga and a political thriller rolled into one, but not quite compelling any way; in fact, we wonder if the filmmakers were trying to cram a whole miniseries into a two-hour feature film, which explains the hectic pacing that robs the storytelling of any meaningful plot or character development.

After a prologue establishing how our eponymous lead Lok (Ren) had spent three years in jail for his gang leader Cheong (Yam), the story begins in earnest when Lok is released from prison and rejoins Cheong to help the latter wind down his illegal businesses. Whilst the entrepreneurial Syun Pau (Lamb) and the aggressive Fai Wang (Danny Chan) take it in their stride, the hot-tempered Tim (Tam) refuses to do so; not only does he set up his own dealings with a group of untrustworthy Thai customers, he conspires with the corrupt Chief Superintendent Richard (Gregory Charles Rivers) to help the latter do his dirty business, despite Cheong’s warnings to the contrary.

It should come as no surprise that Tim will eventually betray his brothers in a bid to take over Cheong’s role as leader of the San Luen Sing group, going so far as to threaten the elders to get them to vote for him and killing the ones who refuse. Amidst the haphazard twists and turns, Lok will reveal himself to be a long-time mole for the Hong Kong police. After his superior Law’s (Cheung) untimely death at Tim’s hands, Lok will link up with hard-nosed inspector Ching (Fong) to try to expose Superintendent Richard, with some occasional help from another undercover agent Ka Kui (Ron Ng) whose cover is as an aspiring boxer at Syun Pau’s underground boxing club.

Alas, it is not enough that it tries to be part ‘Election’ and part ‘Infernal Affairs’; as we find out in the last third, it also wants to be part ‘Cold War II’, switching awkwardly from crime to politics as it reveals that Richard is but a puppet for a mysterious power broker known only as Gentleman (Tsang), who hopes to take advantage of the chaos before the handover to consolidate his influence within the impending Legislative Council. Lok not only re-emerges at this point as the chief of the San Luen Sing, but also ingratiates himself with Gentleman in order to re-establish himself as a political figure. And yet, if there was ever any doubt where Lok’s convictions lie, just remember that it is after all a film bankrolled by Mainland Chinese companies.

That pronouncement should also re move any ambiguity of the outcome of the quintet (Cheong, Lok, Syun Pau, Tim and Fai Wang), or why the British are portrayed as criminal capitalists whose only motive was to exploit their power and authority for ill gain, or why Lok ends up making an impassioned speech in court about standing up against the British as an ordinary Hong Kong citizen. It is unfortunate that recent such pre-Handover set movies have all sought to paint the British rule as foul and malevolent, and ‘Man on the Edge’ is guilty of the same overt political rhetoric, made all the more painful to watch given how clumsily it is depicted.

The only saving grace is the cast, which try their level best to bring gravitas to their respective characters despite the thinly written roles. Yam is suave and charismatic as the gang leader Cheong, while Tam excels as the irascible villain Tim. Lamb and Chan have smaller parts as Syun Pau and Fai Wang, but add interesting textures to the brotherhood. Equally enjoyable to watch are the customarily stoic Fong, the coolly menacing Tsang, and the humblingly authoritative Hung. Amidst such a formidable contingent of supporting players, Ren is somewhat miscast as the conflicted hero who has to decide between doing the right and the loyal thing; as competent an actor he has matured into over the years, Ren just isn’t as convincing as he needs to be for his duplicitous role to work.

As much as we’d like to love ‘Man on the Edge’ therefore, it is quite a letdown, wasting the sheer talent onscreen for a politically tinged pre-Handover triad drama that lacks suspense, excitement and worse, coherence. Like we said before, there is plenty of promise in both the story and performances, but the execution is terrible, and is probably best described as someone trying to cram an entire miniseries worth of plot into a two-hour feature film without care of build-up, continuity or pacing. Even with the occasional gunfight and vehicular chase, the thrills are few and far in between. Except therefore for old times’ sake, this Man has clearly fallen over the edge.

(Brotherhood, corruption, politics and everything but the kitchen sink thrown into a unnecessarily convoluted plot with little suspense, excitement or coherence, this triad drama is a criminal waste of its impressive ensemble) 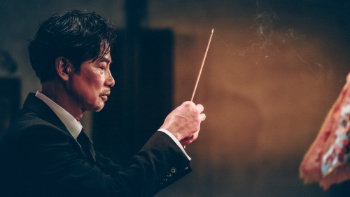