Synopsis: A man wrongly convicted of conspiracy to commit espoionage against the US is offered his freedom if he can rescue the president's daughter from an outer space prison taken over by violent inmates.

The somewhat intriguing sci-fi premise of this action thriller shouldn’t otherwise distract you from the fact that it hails from Luc Besson’s Europacorp, which has made its name in recent years with an unparalleled string of quick-and-dirty B-action movies- some of which like ‘Taken’ and ‘District 13’ are admittedly not without their guilty pleasures. Indeed, ‘Lockout’- from an original idea by Besson no less- fits squarely in the same category as the rest of his made-on-the-cheap flicks, offering some diversionary pleasures during its runtime but little else otherwise.

Basically recycling John Carpenter’s cult classic ‘Escape from New York’ in an outer space setting, debuting writing/ directing pair Stephen St. Leger and James Mather are at least well aware of the derivativeness of their material, adopting from the outset a tongue-in-cheek approach to the proceedings. With brisk efficiency, they establish the requisite backstory to former CIA operative Snow (Guy Pearce) who is being questioned by a sinister-looking Secret Service Agent Langral (Peter Stormare) for allegedly killing his fellow CIA agent.

Even as Snow is being pummelled during questioning, he remains unflappable, returning instead each blow with a quick-witted quip and a devil-may-care attitude. Falsely convicted of the crime, he is arranged to be sent to the first-of-its-kind maximum-security prison MS-1 to begin a 30-year sentence. Yet before he is put into a cryogenic state like the 500 other prisoners on board MS-1, an interview between a humanitarian worker Emilie (Maggie Grace) and a crazed convict Hydell (Joseph Gilgun) that goes awry leads to a mass breakout by the rest of the inmates and the Government to turn conveniently to Snow for assistance.

There is little point in belabouring about why sending in one guy might be the best means of intervention- after all, if you are to enjoy the little pleasures that the film offers, you’d best keep your brains in a cryogenic state (pun intended). Snow’s mission is simple- rescue Emilie, who also happens to be the President’s daughter; and while he is at it, try to get intel from a former partner Mace in order to clear his name. The same can be said of the movie’s plot, which seems content at setting Snow and Emilie on the run from Hydell and his older brother Alex (Vincent Regan).

That simplicity would not have been as obvious if Leger and Mather went about with a clear sense of purpose, but most of the time, it appears that the duo are just busy running from one close encounter to another, so much so that when it finally becomes clear how they were planning to escape in the first place, it seems merely coincidental than premeditated. True to its B-movie style, there is a certain grunginess to the way the action scenes are shot, but it does get repetitive and less exciting as the movie wears on.

Pity the lack of attention paid to the action, for Pearce does cut an impressive muscular frame for the movie. Nonetheless, this is unlikely to do for him what ‘Taken’ did for Liam Neeson’s career, for the simple fact that his similar one-man show doesn’t reach the heights of exhilaration that Neeson accomplished. Instead, you’ll remember his verbal jousting more than his physical ones, and his deadpan sense of humour is probably livelier than any of the action he does in the movie. Pearce also shares an appealing chemistry with Maggie Grace, and their back-forth quibbling makes for some of the film’s best moments.

The amusing repartee and sharp one-liners end up saving the film, for otherwise its blatant leaps of both logic and coherence would have been even more evident. Not only is the plotting often absurd- whether the prisoners’ effortless breakout or Snow and Emilie’s climactic space jump- the individual scenes are stitched together with little attempt at continuity, so much so that you can’t help but wonder ‘now how did they get from here to there’ at times.

Yet you could say that a movie like that- or for that matter any Luc Besson action movie- isn’t built to be held up to scrutiny, since all they wanted to do was to offer some unadulterated action thrills the way B-movies in the past used to. ‘Lockout’ sure achieves that, and if you’re willing to lower your expectations, you’ll find that there’s enough shooting and explosions going on to keep you occupied. Of course, we'd also like to think a premise like this could also have been much more in the hands of a different writer and producer- instead, we get a movie that will be soon join the ranks of other forgettable B(esson)-action movies.

(It’s got some unlikely deadpan humour, but most of the time, Luc Besson’s latest B-movie tries too hard to cover up its lazy plot and generic action with a frenetic pace) 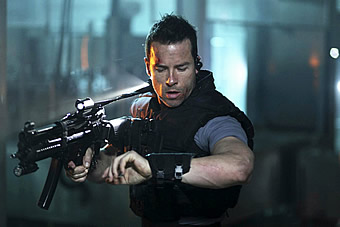 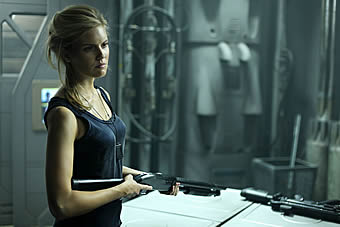 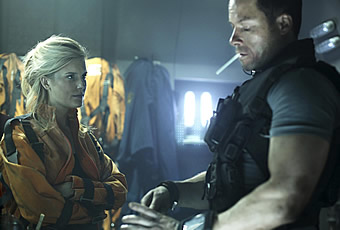 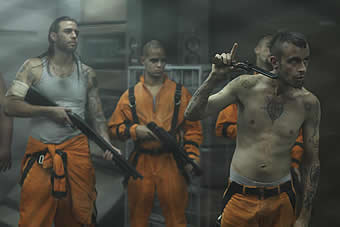 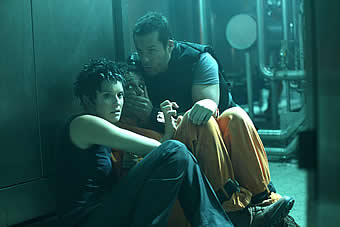 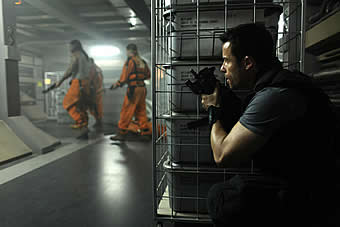