Synopsis: No job, bad romance, and terrible grades… Nothing goes smooth in young Hye-won's life in a big city. She puts her unsolved matters behind and impulsively returns her hometown. There she reunions her childhood friends Jae-ha and Eun-sook who carry their unusual rural life on their own way. From that winter Hye-won's days are filled with simple but peaceful moments; having meal with her organic ingredients. All through 4 seasons Hye-won slowly finds the real pleasure of living a simple life, and realizes the genuine reason to return homeland. New spring is approaching, and she puts the first step in her brand new life.

Little Forest is a South Korean film adapted from a Japanese manga series of the same name. It follows the main character, Hye-won, who returns to her hometown after experiencing disillusionments and disappointments in the big city. She reunites with her childhood friends Jae-ha and Eun-sook, and she slowly rediscovers the pleasures of leading a simple life.

The film is directed by Yim Soon-rye, who is known to make films that deviate from the mainstream, big budget kind of Korean movies. Instead, for this work in particular, she wanted to present something that was different to what is already in the market; a film that avoids any violence, bloodshed, but one that is true to what the Korean society is facing. For that, she has chosen to put focus on what young people experience - in overcoming disappointments and rehabilitating from urban life.

While the manga series was actually first published in 2002, Yim’s take on the film still remained relevant to its audience. Since the setting of the story is at a small town in Korea, some deviation from the original story is expected. The four seasons and food preparation also made up a big part of the storytelling in this movie. Interestingly, the director was told to still retain some Japanese dishes. Also, as Yim is known as an animal activist, she has made it a point to not have any meat based dishes featured in the film. The food preparation was elegantly captured, seeing how the seasons impact the dishes prepared (the ingredients used, how the food is prepared etc.) and vice versa.

The character development of Hye-won also corresponds with the changing of seasons. She slowly gains back her own pace of life, and come into acceptance with her circumstances, learning to face them head-on. This comes not only with her own self-discovery, but also with the time shared with Jae-ha and Eun-sook, which takes her to view her life with a different lens. There was quite a nice and heartwarming atmosphere that was maintained throughout the movie.

Evidently, Little Forest not your big on drama, conventional kind of movie. In fact, the pacing is a bit too slow moving and may start to bore some people mid-way. Nonetheless, it's a great change in palate as the movie dishes out the everyday, normal aspect on the culture of the Korean society.

(A deviation from the usually boisterous and action packed Korean films, Little Forest is a feel-good, peaceful and mellow film, putting focus on non-dramatic personal stories and simple living) 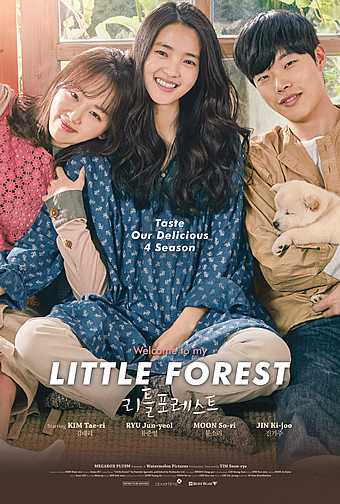