Synopsis: Ryota has earned everything he has by his hard work, and believes nothing can stop him from pursuing his perfect life and living as a winner. Then one day, he and his wife, Midori, get an unexpected phone call from the hospital. Their 6-year-old son, Keita, is not their son - the hospital gave them the wrong baby. Ryota is forced to make a life-changing decision, to choose between “nature” and “nurture.” In the meanwhile, seeing Midori’s devotion to Keita even after learning his origin, and communicating with the rough yet caring family who raised his blood son for the last six years, Ryota also starts to question himself: has he really been a “father” all these years… The moving story of a man who finally faces himself when he encounters an unexpected wall for the first time in his life.

Who would you choose? The son you had raised as your own flesh and blood for six years, or the one whom you realise six years later was in fact your own? That is the dilemma at the heart of Kore-eda Hirokazu’s sharply observed family drama, which revolves around two families who are suddenly confronted with the startling truth that the child they had been raising for the last six years had been swapped at birth by an emotionally disturbed nurse in the hospital.

Whilst Hollywood might have turned this into some trite holiday comedy, Hirokazu uses the high-concept premise to explore the provocative theme of nature versus nurture. How much is a child’s personality defined by his bloodline? How much of him is defined by the environment he has been brought up in? It’s a topic studied endlessly by biological psychologists, but Hirokazu doesn’t take a clinical approach to it; rather, he goes one step further to examine the ties that bind parent and child, the inevitable bond that must be formed after caring and bringing a kid up as one’s own.

It is with this lens that Hirokazu, who also wrote the script, brilliantly casts the fathers as contrasts. On one hand, Ryota Nonomiya (Suspect X’s Masaharu Fukuyama) is a highly successful architect but cold and emotionally distant as a father; not for the fact that he doesn’t love his son, but Ryota has high expectations of Keita (Keita Ninomiya) and is disappointed that his son isn’t yet living up to them or for that matter want success as much as he should. And then on the other, there’s Yudai Saiki (Lily Franky), the owner of a dilapidated neighbourhood electrical shop who is playful, child-like and warm-hearted; not only is he the exact opposite of Ryota, the boy he and his wife has raised, Ryusei (Hwang Sho-gen), has turned out just like him.

Less patient audiences may no doubt be frustrated by Hirokazu’s measured pacing, but it is precisely that artistic choice which forces his viewers to focus on the nuances. Indeed, those who have followed Hirokazu’s dramas will know that he has always been a thoughtful filmmaker, one whose dramas of children coping with loss and longing are filled with beautiful intimate moments instead of melodramatic histrionics. Sure enough, Hirokazu wants his audience to pay attention to the minutiae of his characters’ daily lives to recognise the tensions, hopes and disappointments within each family and even within each individual of the family.

So even as the two families move from spending time together to exchanging the boys for the weekend, what truly matters is the dynamics within each nuclei, which comes into much clearer focus as each child and father gets to experience a different nurturing environment. There is no judgment cast here whether Ryota or Yudai runs the better home - even though of course it’s inevitable that one will probably choose Yudai’s as the more ideal one for a child’s upbringing; on the contrary, Hirokazu depicts with authenticity the difference between two very different styles of parenting and their concomitant effects on the child.

Adding further texture to the narrative is Hirokazu’s keen observation of Ryota’s own relationship with his parents, drawing a link between his own troubled childhood - his mother abandoned him with his father when he was only a kid - and his existing behaviour. Besides emphasising the parent-child connections, the film also finds much emotional heft in its character study of Ryota’s coming-to-terms with his past and reconciling that with the frosty manner with which he has been treating Keita - no matter how much he does love him on the inside.

Fukuyama plays Ryota without any hint of showiness, a significant change from the ‘Galileo’ persona his fans may have been used to - but more than just putting up a stoic demeanour, Fukuyama does calibrate his performance to show a more tender side to his character especially in the later scenes. As always, Hirokazu has a knack for directing children, and next to Fukuyama’s anchor lead, it is Ninomiya and Sho-gen who steal the show as the cute but never cloying kids who seem innocently oblivious to the situation which they are in; their performances are natural and unaffected, and almost effortlessly tug at your heartstrings.

It is no wonder that the film has gone on to win the Jury Prize at this year’s Cannes Film Festival, with festival director Steven Spielberg so enamoured with the show that he has acquired remake rights to the movie. This is a rare Japanese gem, much like the award-winning ‘Departures’, which captures with wit, humour, poignancy and warmth the meaning of family and parenthood. The ending is also one of the most perfect we have seen, hopeful and reassuring in its affirmation of love, kinship and reconciliation.

(A near-perfect Japanese drama that meditates on the meaning of family and parenthood with wit, humour, warmth, poignancy and authenticity) 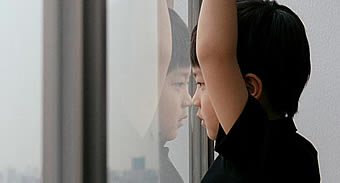