Synopsis: Based upon the bestselling book by Yann Martel, LIFE OF PI tells the story of a young man’s incredible survival at sea against impossible odds. A remarkable technological breakthrough in 3D epic adventure, PI is an emotionally captivating experience that will inspire, touch and transport audiences to a place of discovery that they will never forget.

A man. At sea. With a Bengali tiger in his lifeboat. That in essence is the premise of Yann Martel’s ‘Life of Pi’, one of the most talked about books of the last decade. If you’re thinking ‘Castaway’, then you’re half right – indeed, there is a whole section in the movie where you see but one human character trying to survive against the odds of nature. But if it were that simple, then it would not have taken so long for the book to make the transition to the big screen; on the contrary, there is far more meaning to this ripping lost-at-sea yarn.

Anyone who has read the book will tell you that Martel’s Booker-winning novel is really an allegorical tale of faith and reason, or to put it plainly, to believe without seeing. Precisely because of this, the book was widely deemed unfilmable - short of having its titular character, Pi (short for Piscine Patel), recite his thoughts to the audience incessantly. Yet despite retaining the novel’s narrative structure in having Pi relate his incredible tale, director Ang Lee is a better filmmaker than to lay all that exposition on his protagonist; instead, together with screenwriter David Magee, he takes advantage of the book’s cinematic qualities to enhance the complex themes within Martel’s book.

So more than half of the movie is spent on the second act of the book, that sees Pi as the sole survivor on board a Japanese freighter which capsizes in a thunderstorm by climbing onto the one and only lifeboat. At first, Pi is joined by three other animals from the zoo his family owns – an orang utan, a hyena and the ferocious 450-pound tiger he names Richard Parker; though it isn’t long before the survival of the fittest and the smartest dictates that only Pi and the tiger are left.

Was it God’s plan that he survived the storm? Was it God’s plan that he be left to fend for his life against one of God’s fierce yet majestic creations? What was God’s plan for him in the days ahead? These nagging questions linger at the back of Pi’s head, even as his day to day consists of collecting enough water, fishing for food, and most importantly establishing a relationship of mutual dependency with Richard Parker just so the latter does not decide to rip his head off one day for its meal.

227 days is how long Pi spends adrift before being rescued - and the story told in flashback by an older Pi played by Irrfan Khan pretty much tells you that he will make it out of his ordeal alive. But in between what would certainly be an endless repetition of days and nights for Pi, Lee fills the screen with some of the most beautiful visuals you have ever seen, drawing his viewer into a fantastical world. By day, the ocean in looks like a vast mirror reflecting the white clouds in the sky; by night, it glows phosphorescent with iridescent jellyfish and just about one of the largest whales you have ever seen breaching.

A lot has been said of the movie’s lush imagery, but all that talk doesn’t quite prepare you for just how much of an awesome spectacle Pi’s journey is. With generous help from his cinematographer Claudio Miranda, Lee has orchestrated hands-down the most gorgeous film you’ll ever see this year – and not only does Lee manage to translate all those fascinating images from the book for the cinema, he does so in stunning 3D. Lee’s mastery of 3D deserves special mention, because – like Martin Scorcese did with ‘Hugo’ – it shows the possibilities that superlative technology can offer to a master craftsman to immerse his viewer into the experience of the movie.

Rightly so, the larger-than-life quality of the images leaves you feeling surreal – especially when Pi suddenly chances upon an island teeming with meerkats that turns into a shimmery carnivorous entity by night. The effect is entirely intended – ditto for the whimsical style that Ang Lee evokes for the preface that covers Pi’s childhood as the son of a Pondicherry zoo owner, including why and how he got his name shortened from Piscine Militor Patel – but its purpose only becomes clear towards the end when the present-day Pi relates a parallel story but with its characters as humans instead of animals.

As the book has, the metaphorical ending will likely polarise viewers (rest assured, even though a good many already know how it ends from the book, we won’t spoil it here for the uninitiated) – but no one can quite deny what a feat of filmmaking Ang Lee has achieved with this movie. In line with the core of the novel that questions the very notion of faith, Lee has lavished the film with a rapturous fable-like quality that manages to convey both the peril, isolation and loss of its lead character as well as to suspend its audience on the edge of belief and doubt as to the veracity of the story.

In particular, Lee pays great detail to the evolving relationship between Pi and Richard Parker. So vivid is the tiger that you would not believe it was mostly a CGI creation, but with the wonders of technology today, Lee has created a character both animal in its ferocity and yet human in spirit. Lee guides his newcomer actor Suraj Sharma adroitly to play the counterpoint, and Sharma is truly a revelation in the way he gets under the skin of his character to portray Pi’s emotional and psychological complexities – his doubts, his fears and ultimately his faith.

And no matter your personal inclinations towards the view of God and religion portrayed in Martel’s book, there is no doubt at all that Ang Lee brings an Oscar-worthy craftsmanship to this adaptation. From start to finish, Lee invites you to join him in a spellbinding journey, one that is always beautiful and occasionally breathtaking as beguiling scene after beguiling scene unfolds before your eyes. There is poetry, mysticism and magic in the film, and at once this seemingly simplistic story of a man at sea with a Bengali tiger becomes so much more – a survivalist tale of man against nature, an intriguing reflection on the possibility of co-existence and finally a mesmerising lesson on the perennial debate between faith and reason.

If in the end you’re not convinced of its spiritualism, then at the very least we guarantee you’ll be completely won over by the film’s sense of wonder and imagination.

(Putting some of the most beautiful visuals you’ll see in a film this year to the service of a story that debates the very notion of faith, Ang Lee has created a masterful work of storytelling that is poetic, mystical and magical) 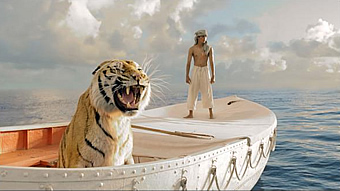 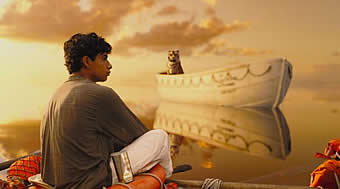 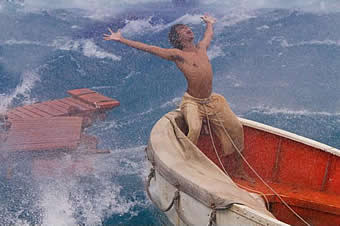 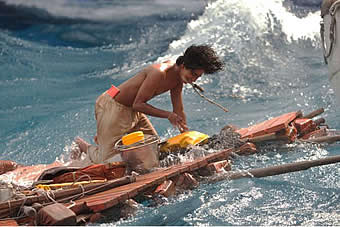