You’d do well to keep the above in mind as you sit through Tom Hooper’s faithful – if a little too slavish – big-screen adaptation of the Mackintosh musical, especially if you have yet to be acquainted with either Hugo’s novel or for that matter, the West End and Broadway musical. Brought to the screen by writer William Nicholson, it inherits nearly every one of its source material’s strengths as well as some of its weaknesses – the most significant of the latter being its narrative deficiencies.

In translating the novel for their stage production, Alain Boublil and Claude-Michel Schoenberg made sure that each one of the characters – and therefore each one of their actors – get his or her turn under the spotlight, hence the respective solo musical numbers. Such constraints therefore meant that any thematic exploration would likely be superficial, with some being even more fleeting than others – so in the context of ‘Les Miserables’, the viewer is expected to accept at face value the struggle between reformation and justice between Valjean and Inspector Javert that eventually consumes the latter, or the love triangle between Marius, Eponine and Cosette that leads to physical and emotional tragedy for one of the threesome.

A lot goes on between a multitude of characters in the musical, and for better and for worse, all of it is squeezed into a two-and-half-hour running time for this movie. Beginning as the musical does with the “Work Song” that introduces the plight of Jean Valjean as well as his nemesis Javert, Hooper dives straight into the story’s most compelling theme of grace and redemption, both of which Javert does not subscribe to – which is integral in understanding his dogged chase for Valjean and his subsequent predicament when the latter shows him mercy. All through Valjean’s years as mayor of Montreuil-sur-Mer and later on in Montfermeil as father to Cosette, that running theme is easily the most riveting aspect of the tale.

Sharing thematic association with the central one between Valjean and Javert is that of Fantine’s wretched circumstances, whose life intertwines briefly but irrevocably with Valjean as the latter takes it upon himself to look after her daughter Cosette at a young age. Fantine does not last long in the movie – more a supporting character than a lead one – but her factory worker turned prostitute character is lent potency and poignancy by the strength of Anne Hathaway’s career-defining performance. It’s no secret that the character’s solo ‘I Dreamed A Dream’ is one of the highlights of the entire musical, but here Hathaway truly knocks it out of the park through a deeply affecting delivery that will leave you in tears – and thanks to the intensity of her portrayal, you’ll end up feeling even more for Valjean when he extends both mercy and compassion to Fantine.

Against such a heartfelt emotional climax early into the film, the subsequent relationship between Marius, Eponine and Cosette just seems too trivial. Little explanation is given why Eponine is in love with Marius, nor why Marius falls so deeply in love with Cosette at first sight. A good part of the movie hinges on how much the audience buys into Marius’ love for Cosette and Eponine’s unrequited love for Marius – and because both are only so weakly delineated, Eponine’s supposedly tearful solo ‘On My Own’ comes off histrionic rather than affecting. Ditto for Valjean’s subsequent number ‘Bring Him Home’ – meant to express his sincere hope for Marius to be well on the eve of the student revolution after being moved by the latter’s love for Cosette – which fails to achieve the emotional resonance it should.

At the risk of sounding blasphemous to fans of the musical, we’d like to think that the love triangle could have been simplified to just a simple and heartfelt romance between Marius and Cosette for the film, which would not be deprived the viewer of that intended sense of dread for the couple as the day of the revolution dawns. Thankfully, the film gets back on much surer footing once that day comes along, depicting the bravery of the revolutionaries – especially the precocious but oh so adorable Gavroche (Daniel Huttlestone) – as they face the full military might of the King’s army.

There is also surprising heft to be found in the ensuing but inevitable confrontation between Valjean and Javert where the latter’s obstinate beliefs about justice and character ultimately prove to be his own fatal undoing. We won’t spoil the turn of events for those unacquainted with the story; suffice to say that Javert’s soliloquy is one of the most intensely emotional parts of the movie, and star Russell Crowe’s moment of crowning glory that should put to rest any doubts you might have had of his casting in the movie – in particular given his thinner voice and limited vocal range.

Still the movie rightfully belongs to Hugh Jackman, and that becomes ever clearer as both Marius and Cosette come to realise the immense depth of humanity in Valjean. His epilogue might seem too subdued compared to the earlier scenes with gallantry and sacrifice, but the restraint allows for a beautifully touching farewell which reunites him with the people whose lives he has touched with his generous acts of kindness.

In turn, Jackman gives one of the very best performances of his career, starting off by playing Valjean as a scorned individual filled with rage and then softening as he is shown mercy and eventually maturing into a man of nobility and dignity. Given the vast time span over which the story unfolds, Jackman’s multifaceted performance of Valjean that evolves with the circumstances he has seen is utterly stellar, and anything less than an Academy Award recognition would be nothing short of a travesty. Jackman’s Broadway inclinations also make him well-suited for the singing demands of the role, but even the limits of his voice is tested with the daunting ‘Bring Him Home’ where the strain is very much noticeable.

Also worthy of mention is Eddie Redmayne, the British stage and cinematic actor who proves to be equally adept at a captivating performance as Marius as providing his character a warm and robust voice. We shan’t repeat our ebullient praise for Hathaway, but her exit leaves a hole in the picture that neither stage veteran Samantha Banks (as Eponine) nor Amanda Seyfried (as Cosette) manage to fill. If Hathaway doesn’t get an Academy Award nomination next year, the Academy most certainly must be blind.

Of course, holding all their performances together is Tom Hooper, who follows his Academy Award win for ‘The King’s Speech’ with what is definitely an ambitious undertaking given the weight of the expectations of countless fans of the stage musical. Even so, Hooper’s even bolder move was to get the actors to sing directly on camera, a risk that ultimately pays off in the richness and complexity of the emotions expressed through their singing that brings out the intensity of the drama unfolding on screen.

Presumably to get his audience intimately acquainted with the characters, Hooper also demonstrates a propensity for medium close-ups, and though the consistency of the framing may seem a little peculiar, it does allow for us to observe more carefully the outstanding acting from the cast. The scenes where cinematographer Danny Cohen pulls out to convey the scope of the set design however prove to be slightly underwhelming, as Eve Stewart’s production design seems to have a staged rather than realistic quality in recreating the landscape of France in the 1800s.

That very flaw encapsulates what is wrong about this big-screen adaptation of Mackintosh’s beloved musical – it remains very much stage bound. Of course we’re not talking about the sets alone, but really the whole storytelling – which seems obliged to retain every single character relationship in the musical and every one of the numerous themes within. But what works in the context of a stage musical doesn’t work as well in a movie, and we had hoped most importantly for greater exploration of the cornerstone relationship between Valjean and Javert – instead of say some sappy love triangle between Marius, Eponine and Cosette.

No doubt the acting is flawless and the singing as best as the actors are able to accomplish – but the directing and adaptation is what ultimately makes this less impressive than what the adulation so far would have set you up to expect. It’s certainly a good big-screen musical no doubt, but we would hesitate from calling it great – still, by the time it rolls along to the stirring finale of ‘Do You Hear the People Sing’, it will succeed in bringing a lump to your throat, though probably not quite nearly enough for a tear in your eye.

(The performances are flawless, the singing is on the most part impressive, but this big-screen adaptation of the musical remains too stage-bound to soar to greatness) 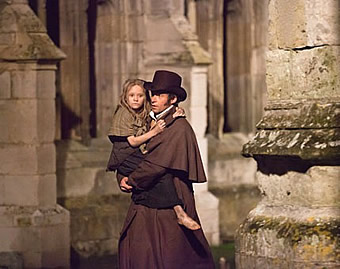