Synopsis: Jupiter Jones (Mila Kunis) was born under a night sky, with signs predicting that she was destined for great things. Now grown, Jupiter dreams of the stars but wakes up to the cold reality of a job cleaning toilets and an endless run of bad breaks. Only when Caine (Channing Tatum), a genetically engineered ex-military hunter, arrives on Earth to track her down does Jupiter begin to glimpse the fate that has been waiting for her all along - her genetic signature marks her as next in line for an extraordinary inheritance that could alter the balance of the cosmos.

I’ll be upfront and warn those contemplating watching Jupiter Ascending that you need to go in with low expectations to enjoy the film. Unless your idea of what makes a film good is huge explosions, pretty characters prancing around in elaborate costumes and beautiful visuals. After all, who cares about plot, lines and pacing right?

Jupiter Ascending is really very much a visual feast but nothing more than that. The action sequences are generally well paced and I applaud the fact that CGI for the actions were kept minimal. The costumes are stunning (as are the actors).

Which is a great pity because, on paper, Jupiter Ascending really had potential.

For a start, like all sci-fi films, Jupiter Ascending is ambitious in its storytelling. An entirely different reality of an alternative universe with its own ecosystem, species and history is created. There are soldiers spliced with animal DNAs such as Caine (Channing Tatum) who has some wolf in him and Stinger (Sean Bean) who has some bee in him (guess where they got their names from?). There was potential to explore and mine all that richness for more stories but this is undermined by the weak delivery of the first film in what the studios were probably hoping would be a new franchise.

While the plot of Jupiter Ascending was hackneyed, it had pretty interesting characters whose backstories would have been fun for the audience to explore. I could have seen the many fanfiction pieces that fans would have spun off from the story of Caine, Jupiter and the Abrasax family. Let’s be honest, the basic plotline of The Matrix, the film franchise that the Wachowskis are renowned for, was pretty cliché too – the story of a Chosen One who comes out of nowhere and whose destiny is to save the world. It was the treatment of this plot premise (as well as really cool action sequences and visuals) that made The Matrix such a groundbreaking series. Jupiter Ascending’s basic plot premise was this too but the treatment was a complete letdown.

The cast is also one that is renowned for not just their good looks but also their ability to act. Somehow though, the directors succeeded in not tapping on that ability. I can’t help but wonder what kind of directions Andy and Lana Wachowskis gave Eddie Radmayne for me to give such an exaggerated and overly affected performance as Balem. It reminds me somewhat chillingly of how Natalie Portman almost killed her career with her expressionless and emotionless turn as Amidala in the Stars Wars prequel trilogy. At least Radmayne has The Theory of Everything that is out in the same season and that can probably help cushion the fallout from Jupiter Ascending.

To the Wachowskis’ credit, Mila Kunis and Channing Tatum have some chemistry. While their performances are not going to garner them any Oscars, they put in decent performances to, I think, ward off any Razzie nominations. It also helps that they are pretty easy on the eye. Apart from these three actors, it is hard to discern the performances put in by the rest of the cast as their characters do not appear to add to the story. It makes it difficult for one to give a fair critique of their performances hence I’ll refrain from that here.

It also could have been the film that would have move the Wachowskis’ career out of its current state where the siblings are now more renowned for the visual flash and bang in their films rather than the creative storytelling and treatment that was showcased in The Matrix.

(It could have been amazing. It could have become a blockbuster franchise. It could have boosted the Wachowskis’ careers. But that’s all Jupiter Ascending is. A “could-have-been” and one that is not worth your investing time and money in unless you really are just a visual person) 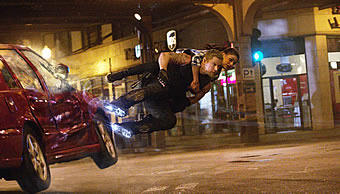 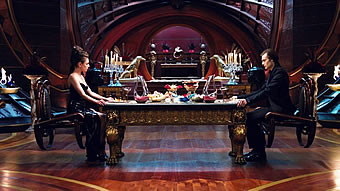