Synopsis: After a devastating car accident, Jessie (Sarah Snook) returns to Louisiana, her estranged father and the crumbling bayou mansion of her childhood. When she finds videotapes of tarot readings her mother made for her before dying in childbirth, a ghostly presence in the house shows Jessie her mother’s predictions may be terrifyingly accurate.

Not to be confused with ‘Annabelle’, and for that matter bearing no relation to the prequel of ‘The Conjuring’ just a month earlier, ‘Jessabelle’ sees red-headed twenty-something Jessie (Sarah Snook) return to her gloomy childhood house on the Louisiana bayou after a horrific car crash kills her boyfriend and unborn child and leaves her dependent on a wheelchair, only to come face-to-face with a black-haired, pale white, female spirit seeking her return and bent on having her dead. If that sounds like an excuse for yet another haunted-house horror, then thankfully director Kevin Greutert and screenwriter Robert Ben Garant have (slightly) bigger ambitions.

As a nod to the backwoods setting, the first piece of the puzzle comes in the form of a stack of VHS tapes which Jessie discovers in her mother’s chest of old drawers. There is something creepy in and of watching these tapes on a standard definition cathode-ray TV screen, but at first Jessie is comforted by the sight of a mother (Joelle Carter) she never knew, who in the tapes explain her intention of making them as a means of communicating with Jessie in the unfortunate event that she passes away from the cancer afflicting her body. Through the tapes, Jessie learns of her mother’s obsession with tarot cards, who foretold not only of a terrible fate for the girl, but also of a malevolent spirit lurking inside the house.

Her worst suspicions are confirmed with the second piece of the puzzle, a series of nightmares and daydreams which Jessie slips into where she encounters the demon girl (Amber Stevens). A cross between a projectile-vomiting Linda Blair of ‘The Exorcist’ and the typical long-haired girl of Japanese horror, the tormented spirit wants nothing less than Jessie’s life – and in one of the showpiece sequences, aims to drown Jessie in a bathtub full of black, oily goop. Though many of these scenes lend themselves for cheap jump-scares, Greutert wisely steers away from such lazy convention, going instead for a slow build-up (not unlike ‘The Conjuring’) to get underneath his audience’s skin. There are some nice suspenseful moments here, but sadly the conclusions of these individual moments rarely make for anything truly memorable, in particular also because the said demon isn’t that scary after all.

At least then there is a decent mystery to be found in here, which largely unfolds as the third and final piece in the second act. With her good friend from high school, Preston (Mark Webber), Jessie takes a boat out across the bayou to find a shrine dedicated in her name on her very birthday, below which is buried a coffin with the bones of an infant. There are voodoo rituals, racial tensions, family secrets and other Southern gothic tropes thrown into the mix, and even though it feels familiar, there’s no denying that it makes for a heady concoction. Greutert directs an otherwise fairly conventional screenplay with the sure-footedness of someone who knows the genre well, and uses the shadowy swamps and bayou setting effectively for eerie atmospherics.

Yes, Greutert is better known for being the man behind two of the ‘Saw’ films, but those who fear that the filmmaker hasn’t quite lost his torture-porn roots can rest easily; slickly directed and just as ably produced by micro-budget horror master Jason Blum (think ‘Paranormal Activity’, ‘Sinister’, ‘Insidious’ and ‘The Purge’, Greutert’s latest is really a much more old-school exercise in tension and suspense. And in that, he finds good company in Snook, an engaging scream queen who exhibits good presence throughout, winning her audience’s sympathy for her utter helplessness at the supernatural occurrences she cannot run away from.

Frankly speaking, we weren’t expecting much of this post-Halloween leftover, but ‘Jessabelle’ is a fairly gripping horror thriller that should satisfy anyone still in need of a good scare. Besides the usual girl-with-long-hair theatrics, what makes this somewhat different from the usual offering is a rich helping of Southern gothic that adds more than a frisson of intrigue and thrill to the mystery at the heart of the hauntings. It won’t be remembered as a classic anytime soon, but this is better than your average disposable fare, so set your expectations right and you won’t be disappointed. 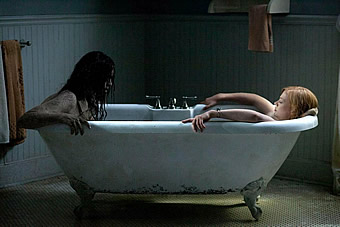