Synopsis:  He Jianhao is realeased from the Boys’ Home and his mother, Huifang, is worried that he would be led astray again. Thus, she wants him to look after her stall in Bugis under her stepsister’s, Yiyi, supervision. Nuoge, who is a effeminate fellow stall owner at Bugis village, has a crush over Huifang for many years.

Because of his work, Jianhao becomes good friends with Fang Dafang, the nephew of Nuoge. He also gets to know a girl, Shanshan, and has a crush on her. Out of curiosity, Shanshan secretly hangs out with Jianhao and his friends despite her parents opposition.

Jianhao’s another good fren, Zach, joined a gang of to get protection as he is always bullied by Alex. Wang Guodong is a gang leader and also the father of Alex. Jianhao joined the gang after much incitation from Zach.

Zhang Tianlong, who is the ex-husband of Huifang, owes the loanshark a huge amount of debts and they look for Huifang to settle them. Nuoge stood up for her and the secret that Nuoge was once a triad member was known. After knowing Jianhao join the gang, Nuoge always advise Jianhao to leave the gang.

Zach and Jianhao have a fight with Alex in a Disco to protect Izzy, Zach’s love interest. Jianhao and Zach injure Alex accidentally and cause him to be paralysed. Guodong vows to revenge for his son. Zach and Jianhao go on a run to escape from his clutches.

At the same time, Nuoge and Huifang seek Jianhao’s gang leader for help. To Huifang’s horror, Hong Zhihua, who is Jianhao’s biological father, is the leader. She blames him for leading his own son astray.

A fight between the triads will break out soon but who will emerge the winner?

First things first, ‘Imperfect’ is quite simply the big-screen iteration of the MediaCorp Channel 8 drama series ‘On the Fringe’. The former probably wouldn’t exist without the latter – not least for the fact that the casting of the two are largely similar, but also because the success of the latter made a gathering of the relatively unknown adolescent cast  possible. To compare the two are therefore inevitable, especially since the Hong Kong born director Steve Cheng was also helmer of several episodes of ‘Fringe’, though the audience – as well as the filmmakers in fact – would do well to remember the difference between the two.

Indeed, there is a distinct sense that credited story writer YY has attempted to condense material that could have made a five-episode miniseries into the span of 90 minutes. So from the start, we are introduced to the multitude of characters in the fastest way possible – a voiceover, delivered this time by Yiyi (Joeyan), the step-sister of lead character Jianhao (Edwin Goh). With Jianhao are his buddies Zach (Ian Fang) and Squeeze (Phua Yida); his antagonisers the arrogant Alex, son of brash gangster Guodong (Hong Kong actor Liu Kai Chi), and two other cocky followers.

Their first run-in results in Jianhao’s arrest and subsequent sentencing into the Boys’ Home for six months, where upon his release the impetuous teenager once again places himself on the edge by joining a triad led by Zhihua (Li Nanxing) much to the chagrin of his helpless single mother (Chiang Chu-Ping). You know things will only get worse before they get better, and true enough, the leadup to the climax involves a fatal clash between the same two teenage gangs, which leaves Alex permanently paralysed and his father Guodong in a vengeful rage.

That’s more than enough characters for a movie – and it only gets more bloated when Nuo-ge (Taiwanese celebrity Li Pei-Hsu), an effeminate gangster who helps out at Jianhao’s mother’s stall and is secretly in love with her, is added into the mix. Overstuffed too is the plot, that in addition to what is described above, tries to highlight the rivalry between Zhihua and Guodong’s methods as well as the supposedly clandestine relationship between Zhihua and Jianhao - the latter in particular is a cliché the movie could very well do without. Cramming too much plot and too many characters sadly results in the opposite, too little subplot development and too few well-rounded supporting acts.

Yet for these imperfections, ‘Imperfect’ turns out to be a surprisingly gripping drama. Credit goes to the young cast – especially Edwin, Ian and Yida – who perform their respective roles with gusto and charisma. Fans of the trio from ‘Fringe’ won’t be disappointed with their acting here, and the uninitiated will understand why they have built up a sizeable fan base after just one drama series. If the teenage cast is good, their adult counterparts prove to be even better.

Most prominent of them all is Kai Chi, the character actor clearly relishing the role of the villain. Eating up the scenery every time he appears, his every little gesture oozes menace, and you can tell that the camera loves him by the number of closeups of his expressive countenance. Kudos too to director Steve Cheng for introducing an unexpected scene where he mourns the vegetative state his son Alex has been left in – not only does it add layers to what would otherwise be a one-note character, it also is, more than any of the other melodramatic scenes, easily the most moving of them all. And next to Kai Chi, our own Nanxing’s more subdued performance pales in comparison – though a good complement in the form of a more broadly entertaining role is that of Pei-Hsu’s Nuoge.

Speaking of melodrama, you’ve got to be prepared that it does get rather heavy-handed along the way. While these specifically crafted emotional scenes don’t get cringe-worthy the way some Channel 8 soap operas do, Cheng doesn’t handle them with enough subtlety or elegance. In fact, both of the earlier mentioned elements are sadly absent in an over-stylised climax filmed in slo-mo and with a sudden downpour – and you can probably very well picture how that looks like.

The overwrought finale and some of the heavily manipulated scenes don’t go down well with the rest of the movie, which actually unfolds with surprising verve. Yes, some of the film’s better sequences are those that Cheng allows his teenage cast to bond and interact freely with one another, and even the more measured ones where he sets up the workings of the triad family that both Zhihao and Guodong are members of. It is in these that he is removed from the trappings of making a television drama, and the inclusion of dialect and more adult themes (even a disturbing scene where Guodong tortures Squeeze) give the film its most distinct identity apart from ‘Fringe’.

Like its title therefore, this youth drama has its flaws, but ultimately strong performances, good pacing and assured direction (for most parts) make this a solidly entertaining watch. It is also the best local film after ‘The Wedding Diary’ earlier this year - which means a lot especially since dramas aren’t the forte of the Singapore movie industry – and a big step-up for Corner Stone Pictures, whose disastrous debut ‘The Ultimate Winner’ could easily have rendered it irrelevant. Perfect it may not be, but watch it with an open mind and you’ll find that it has enough redeeming qualities to more than make up for its imperfections. 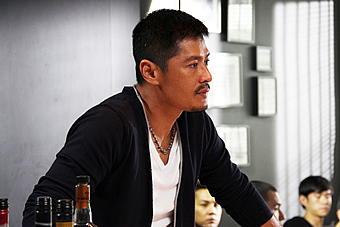