Synopsis: The animated comedy film is about three teenagers who were ignored and bullied by others. By coincidence, they began their lion dance journey under the training of Mr Qiang, a master who grew up selling salted fish. Finally, they realized their dreams and became "lions" in their own hearts with their passion and drive.

When was the last time you caught a movie about lion dance? Once Upon A Time In China 3 perhaps? Although that was literally almost three decades ago. Or Jack Neo’s horribly cringing The Lion Men? Given the rich history and familiarity of lion dance, there’s yet a proper movie that utilizes the subject matter in a good way until China’s latest animated feature, I Am What I Am.

Rather than another animated piece on The Monkey King, Ne Zha or the White Snake, director Sun Haipeng ditches the usual mythology theme and uses lion dance to tell a grounded inspiring story about friendship, hope and dreams.

Set in a rural village in Guangdong, Gyun whose parents are off to the city to work as construction workers is a weak, meek teenager obsessed with lion dance. When a beautiful lion dance promoter handed him a lion head as a gift, Gyun is inspired to take up lion dancing. Roping in his buddies, the monkey-looking Kat and overweight Doggie, Gyun sets off to find themselves a lion dance master. Under the recommendation of an elderly janitor, Gyun finds the master in the most unlikely place- a store selling salted fish.

Moved by the persistence Gyun, Qiang, a once promising lion dancer who has now given up his dreams to earn a living selling salted fish decides to be a master and sponsor to the three underdogs. Will they succeed in winning a place in the upcoming lion dance tournament? Will the three friends remain as losers for the rest of their life?

For a start, there’s no awkward fusion of hip-hop or CGI mechanical lion in I Am What I Am. So don’t worry about that. Instead, there are indeed beautiful and we mean very life-like, generous render of rural villages, alleys and lanes throughout. The details and textures are on the scale of any major Hollywood animation studios. The animation on the whole is simply top-notch and breath-taking although there’s one distracting factor about the character design on the whole, the controversial “slanted eyes” which the filmmakers have admitted it’s purely a move to break away from the traditional aesthetic of having large eyes in animation.

The filmmakers seem to put in lots of effort into the OST as viewers are treated to a variety of songs which include a classic HK movie theme song by the late Roman Tam and original Mandarin and Cantonese compositions. The screenstory credited to Zelin Li seems to take a leaf out of Stephen Chow’s classic comedy Shaolin Soccer. Similarly, I Am What I Am also features a bunch of underdogs, weirdos and some intentional laugh-out-loud humour. The gags are genuinely funny and the action or should we say lion dance choreography is inventive but it’s the heartwarming story that stands out the most.

Gyun hopes to makes his parents proud. Kat and Doggie wanted something more out of their mundane poor life. Qiang is finally back to doing what he loved under the encouragement of his wife who forces him to give it up in the first place. Up till this point, you thought these fellas are going to win the tournament in the final competition with their undying spirits. But life always throw you a curveball unexpectedly as Gyun has to give up on lion dancing halfway in order to fork out a living in the city. It’s full of things like these that makes I Am What I Am a truly remarkable animation. The movie beautifully illustrates the ups and downs of life and the spark that keeps on going in an otherwise bleak environment.

Just like Shaolin Soccer might not be entirely about soccer and Kung Fu Hustle might not be all about kung fu. Surely, I Am What I Am might not be totally about lion dance. But there’s no denying when everything comes flawlessly together, it’s a big win for China animation scene.

(A wildly enjoyable animated movie about culture and dreams that is filled with tears and laughs!) 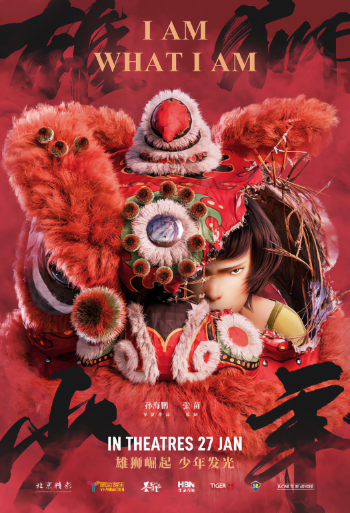