Synopsis: When Oh, a loveable misfit from another planet, lands on Earth and finds himself on the run from his own people, he forms an unlikely friendship with an adventurous girl named Tip who is on a quest of her own. Through a series of comic adventures with Tip, Oh comes to understand that being different and making mistakes is all part of being human, and together they discover the true meaning of the word HOME.

Right from the start, Dreamwork Animation’s Home had some big shoes to fill. The movie is following after a string of well-received animated feature films (How to Train Your Dragon, The Croods, the Madagascar movies) from the same studio, as well as the recent critical and commercial successes of StudioCanal’s Shaun the Sheep Movie and Disney’s Big Hero 6. When compared to all these movies, Home did not quite hit the mark.

The gist of the story is simple enough: An alien race, the Boov, is constantly on the run from their enemy, the Gorg, and decides to relocate to Earth. What wasn’t part of the plan is a blundering Boov, Oh (Jim Parsons), whose mass text revealed the location of Earth to the entire universe, as well as a girl, Gratuity ‘Tip’ Tucci (Rihanna), who was left behind during the relocation of humans to Australia. Together, Oh and Tip set out to look for Tip’s mother, Lucy Tucci (Jennifer Lopez), while making several detours along the way.

It is easy to see why younger children will enjoy the movie (if the reactions in the cinema were anything to go by): the jokes, the explosion of colour (and 3D objects), the quick pace of the plot, the journey around the world in less than two hours, and the relatable, imperfectly human main characters.

Not being a huge fan of Dreamworks’ animation, the highlight of the film for me was probably the voice acting for the two main characters. Parsons’ voice acting of Oh is reminiscent of his popular Big Bang Theory character, Sheldon Cooper (well-meaning, socially awkward organisms, anyone?). I can’t speak for other Big Bang Theory viewers, but whenever Oh speaks, the image of Sheldon Cooper delivering those lines in a straight face comes to mind, which makes the dialogue and jokes doubly funny. For his first voice-acting role, Parsons exceeds expectations because of two reasons – his recognizable voice and Sheldon Cooper.

With a voice as recognizable as Parson’s, a lesser co-star would probably fade into the shadows. That is, if your co-star is not Rihanna. Rihanna’s performance of Tip was gutsy with a  good balance of helplessness and naivety, successfully garnering the sympathy of the audience when empathy seemed all but a lost cause (ever got mistaken for a cat before flying a car over the Atlantic, anyone?). The voice acting of Parsons and Rihanna made the bickering of Oh and Tip tolerable, which is a feat by itself given the rather limited script.

What ultimately lets Home down, other than the comparison with other recent successes, is sadly the storyline, which tries to cover too much in too little time. Funny cultural differences between species – check. An attempt to philosophize colonization and the White Man’s Burden – check. The ultimatum to choose between friends and family – check.  With that many focal points, the meaning of home and family is lost somewhere in-between the Statue of Liberty and the Pyramid of Giza, and fails to touch this audience member, which is a pity, really.

Having too many things to deal with also resulted in a lack of development in the characters. Although there was a brief stab at development right at the end for Oh and the Boov, that comes across as much too late and contrived. And for all of Rihanna’s efforts, there is really that much of the child one can stand with the lack of progress in the character’s maturity.

Judging from the recent spate of family-centric movies, it seems that there is a trend of situating the story in a fantasy setting, while having at least one family member sacrifice him/herself. Home follows this formula (almost, anyway) but fails to connect as deeply with the audience due to its lack of focus in the midst of all the philosophizing and traveling. That said, it isn’t a difficult movie to get through, and is a pleasant enough way to spend about an hour and a half on, especially if you have some kids in tow.

(In all, Home is a predictable, family-centric movie that tries to give meaning to, well, Home. Sadly, this central message is lost during the course of the movie, which is probably why it is largely forgettable) 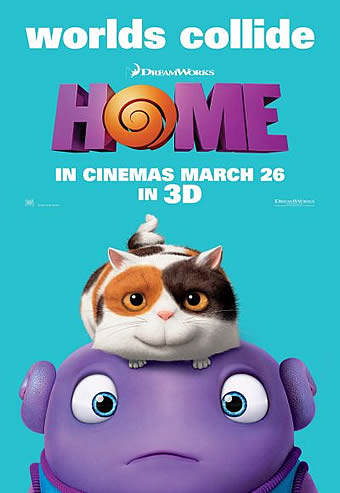 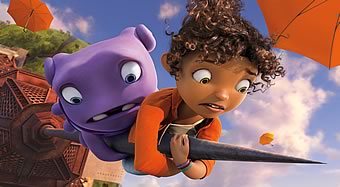 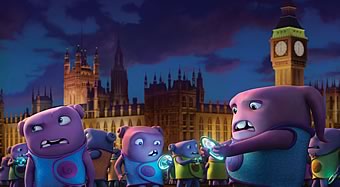