Synopsis: Jun is a top agent of the National Intelligence Service who can strike down dozens of terrorists in one fell swoop. Disenchanted with his life, Jun disguises his death and succeeds in leaving the NIS to lead a normal life as a family man and fulfill his dream of becoming a webtoon artist. However, his unexciting webtoons are ignored by readers and even his wife. Depressed and angry at himself, Jun suddenly draws a webtoon of his past as a secret agent. To his shock, the webtoon gets accidently revealed to the public, goes viral, and becomes a huge hit! Consequently, some members of the NIS and organized gangs, with grudges against Jun, come across the webtoon and start to hunt him down.

Whether it’s a coincidence or otherwise, Hitman: Agent Jun is the third movie to feature “people in disguise” after Extreme Job and Secret Zoo.

Kwon Sang-woo seems to be enjoying some sort of a career resurgence since he was only last seen playing the lead in the romantic comedy, Love Again back in November. This time round, he is a skilled secret agent turned webtoon artist. Sick and tired of being the number one agent for the counterterrorism unit (NIS), orphan Jun (Kwon) decides to fake his own death while on a mission. His mentor, Deok-kyu (Jung Jun-hoo) dubbed the trainer from hell assumed he is dead so is his fellow young trainee, Cheol (Lee Yi-kyung) who idolises him.

In actual fact, Jun has changed his name and is now living a normal life as a webtoon artist with his teenage daughter and wife. However, his career as a cartoonist is far from ideal as his comics are terrible in terms of popularity and he has to frequently resort to taking money from his wife. Until one day, his webtoon became an instant hit when he started a webtoon series about his secret missions in the NIS while drunken. Trouble arises when a number of NIS agents are killed and the Director of NIS assumed Jun to be the culprit not knowing a villain from the past is back to exact vengeance on Jun and Chief Deok-kyu.

This is one movie that is made for those of you looking for a fun time in the theatres. It has a good mixture of action and belly laughs but lacks the momentum to keep things going especially the last act. Something which we will go in detail later on. To his credit, director and co-writer Choi Won-sub manages to churn out a couple of silly gags, wring out some truly laugh-out moments out of Kwon Sang-woo and Jung Jun-hoo and lastly, created a few memorable silly supporting characters along the way.

Although the plotting is highly predictable, the premise is still decently setup. The part where Jun kidnapped Chief Deok-kyu and went on a car ride to save his wife offers lots of cheap laughs. It’s both maniacal and energised throughout. Hwang Woo Seul-hye who plays Jun’s long-suffering wife has a surprise comedic moment towards the end too. And then there’s Jun’s publisher and a supervisor at the construction site who constantly has an axe to grind with Jun’s performance. Both characters offering some laughable comic situations.

While the pacing is generally tight on the whole, Choi turned the finale into a prolonged melodramatic soap opera with lots of shouting thrown in. In what could have been a simple bombastic showdown between the good and evil becomes quite a drag to follow. Yet the solid proceedings before it slip into staleness sort of redeem the entire action comedy.

Kudos also to artist Kim Ye-shin who worked on the dynamic webtoons seen in the movie. The webtoons which tells the adventures of Agent Jun boasts the comedy further with its highly stylised drawings. Jumping on the bandwagon of recent Korean action comedies, Hitman: Agent Jun delivers laughs over action all thanks to a very committed performance from Kwon Sang-woo. Even the smaller supporting characters deliver on-point humour. It does have its flaws nevertheless features a steady stream of laughs. 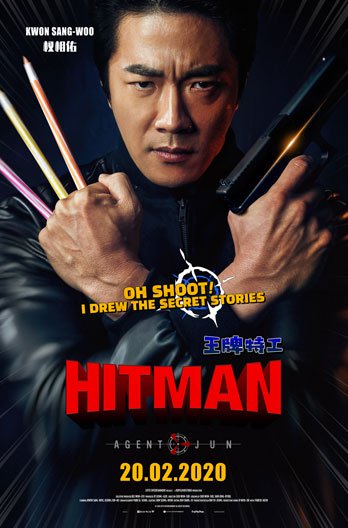