Synopsis: This dynamic action-thriller directed by Steven Soderbergh boasts a talented cast that includes Channing Tatum, Ewan McGregor, Michael Fassbender, Antonio Banderas, Bill Paxton, Michael Douglas, Michael Angarano; and introduces MMA superstar Gina Carano as Mallory Kane, in a demanding lead role that has her performing her own high-adrenaline stunts. Mallory Kane is a highly trained operative who works for a government security contractor in the dirtiest, most dangerous corners of the world. After successfully freeing a Chinese journalist held hostage, she is double crossed and left for dead by someone close to her in her own agency. Suddenly the target of skilled assassins who know her every move, Mallory must find the truth in order to stay alive.

Steven Soderbergh’s repertoire of 24 films within the past 22 years probably qualifies him as one of the most versatile directors in Hollywood, but his latest actioner ‘Haywire’ shows that even someone of his calibre has his limits. Essentially a B-grade movie wrapped up in an A-list package of stars, it is supposed to be the breakout vehicle of mixed martial arts champion Gina Carano- though it’s hard to fathom how anyone would take notice of Carano when Soderbergh is too busy putting his audience to sleep.

Like most of his works, Soderbergh adopts a low-key down-to-earth vibe to his globe-trotting thriller- beginning first in a diner in upstate New York where covert operative Mallory Kane (Carano) meets a former partner Aaron (Channing Tatum). Their brief exchange of words soon escalates into a brutish melee, the first of many where Carano gets to show off her mean MMA moves (with some expert choreography by J. J. Perry) that will make any man think twice before messing with her.

‘Woah’ is the appropriate response in this instance, and should be the response every other time Carano gets to take out her enemies of the opposite sex- alas, Soderbergh does her and the movie a great disservice by his minimalist direction. Indeed, for the most part, there is a distinct sense that Soderbergh is simply content to point his camera and watch like a spectator while his actors go about their scenes, attempting little build-up in excitement or tension where such basic moviemaking techniques would have mattered.

The detachment works in so far as the action is concerned- Carano is after all front and centre performing on her own every one of the stunts, and Soderbergh’s cinematography (under his usual d.p alias of Peter Andrews) enables his audience to appreciate her physicality without having to put up with the annoying use of handheld close-ups plaguing many action movies of late. But his unfussy style also means that his audience has to get through writer Lem Dobbs’ unwieldy exposition that lacks the brevity and concision necessary for any action movie worth its salt.

So even as the action switches from Barcelona to Dublin where Mallory’s earlier mission of rescuing a Chinese dissident journalist (Anthony Brandon Wong) turns out to be no more than a setup, the film never quite musters any genuine excitement at either location- and the sheer amount of talk that the characters engage in do it no favours. That is even more so when the intentions of the various characters become clear towards the end of the film, and what we thought may have been something smarter turned out to be nothing more than an unnecessarily convoluted setup for an otherwise simplistic plot.

Soderbergh also struggles to maintain a consistent tone for the movie, wavering between a classiness befitting of the ‘Ocean’s Eleven’ movies (thanks in no small measure to returning composer David Holmes’ jazzy score) and a grittiness befitting of his latest ‘Contagion’, both of which seem ill at ease in what is in actual fact a glorified B-movie. The ensemble cast however manage to make the best of their respective supporting roles. Antonio Banderas and Michael Douglas are appropriately smarmy as two shadowy Government figures responsible for Mallory’s contract, while Bill Paxton is unexpectedly touching as Mallory’s father. Michael Fassbender steals the show as a fellow operative contracted to take out Mallory, his hand-to-hand combat with Carano easily the best sequence in the whole film. Sadly, Ewan McGregor is miscast as Mallory’s contact man Kenneth, nowhere more evident than in a painfully obvious choreographed showdown between him and Mallory on the beach.

And on hindsight, it may not have been a wise move to cast these actors (with the exception of Fassbender) against Carano. None of them are Carano’s match, and as any Asian action star (pick Donnie Yen or Tony Jaa for instance) can tell you, a worthy opponent goes a long way in an action movie. Soderbergh is also let down by his own disinclination for the material, as his arthouse touch ultimately drains the movie of the sheer adrenaline thrills it should pack. It’s clear to see why Soderbergh had taken the trouble to build a movie around a newcomer, but unfortunately, this star-driven vehicle goes exactly where its title suggests.

(An impressive lead debut by MMA star Gina Carano cannot save this action thriller from being talky, draggy and ultimately an interminable bore) 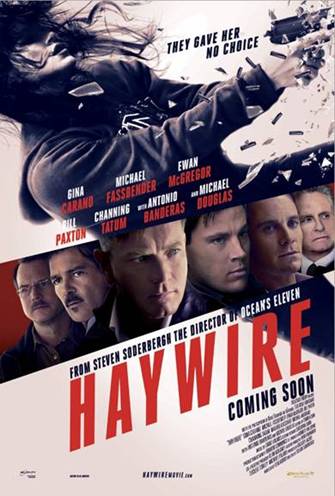