Synopsis:  Magic, monsters, gods, and madness reign throughout the palaces and pyramids of the lush Nile River Valley in this sweeping action-adventure inspired by the classic mythology of Egypt. With the survival of mankind hanging in the balance, an unexpected hero undertakes a thrilling journey to save the world and rescue his true love. Set (Gerard Butler), the merciless god of darkness, has usurped Egypt’s throne, plunging the once peaceful and prosperous empire into chaos and conflict. With only a handful of heroic rebels opposing Set’s savage rule, Bek (Brenton Thwaites), a bold and defiant mortal, enlists the aid of the powerful god Horus (Nikolaj Coster-Waldau) in an unlikely alliance against the evil overlord.

History is replete with the follies of Hollywood’s gods-versus-mortals epics that have since faded into ignominy or is remembered with scorn, so much so that it is almost instinct to wonder which ‘Gods of Egypt’ will turn out to be, especially given its pre-release criticism about its literally white-washed cast. Yet Alex Proyas’ first film in seven years deserves much better regard than the toxic buzz it has been getting – not only is it one of the more imaginative mythological adventures in recent years, it is also one of the most entertaining by simply not taking itself too seriously.

Imagining an ancient Egypt that never existed where gods and men live together, this effects-driven CGI extravaganza pits the benevolent if slightly flirtatious lord of the air Horus (Nikolaj Coster-Waldau) against the nefarious desert god Set (Gerard Butler) who usurps his throne of Egypt on the day of his coronation. As with most such power tussles, there is a familial dimension – Set is in fact Horus’ uncle, who isn’t just resentful that his father, the sun god Ra (Geoffrey Rush), had given rule of Egypt to Horus but also seemingly banished him to a bleak and barren wasteland. So Set kills his brother Osiris (Bryan Brown) and blinds Horus, exiling him to some faraway dune to wallow in self-pity and eternal misery.

That opening sets the stage for Horus to embark on a journey of self-discovery on his way to reclaiming the throne, with immeasurable help from a mortal thief Bek (Brenton Thwaites). It is Bek who returns Horus one of his eyes after breaking into Set’s seemingly impenetrable vault, who also subsequently accompanies Horus on his quest in exchange for passage for his one true love Zaya (Courtney Eaton) back from the underworld. And so begins a series of razzle-dazzle action sequences, including a thrilling chase by two evil goddesses Astarte (Abbey Lee) and Anat (Yaya Deng) atop two giant fire-breathing serpents and a near-death escape from Set with some help from Elodie Yung’s goddess of love Hathor inside the chamber of a towering Sphinx.

Oh yes, there is no such thing as subtlety here. The chariots are pulled by giant scarab beetles. Sedan chairs take flight with hundreds of birds. Gods transform from their 11, 12 feet in height human form into glistening animal-headed robots and bleed liquid gold. Ra lives in a spaceship hovering above the Earth, bursts into flames at will and spends each night doing battle with the Lovecraftian ancient Apep by shooting fireballs from his spear. Indeed, as far as being gaudy is concerned, Proyas isn’t shy at all about flaunting every single dollar of his significant US$140 million budget that went into creating the sheer visual spectacle (or excess, depending on how you see it) that you’ll get to see on the big screen.

Yet its silliness certainly isn’t lost on Proyas; indeed, along with his writers Matt Sazama and Burk Sharpless (‘Dracula Untold’ and ‘The Last Witch Hunter’), Proyas gleefully embraces its absurdity with campy humour. For one, Bek is never too far from an amusing quib usually directed at Bek. For another, the god of wisdom Thoth (Chadwick Boseman) is a ball being haughty and all full of himself – and we mean that literally in the context of the hundreds of copies he has made of himself to serve him in his lair. It never does take itself too seriously, nor too flippantly to be completely dismissed, and the levity is a nice counter-balance to the elaborate kitsch on display.

Credit that too to Coster-Waldau and Thwaites, who sustain a lively bickersome chemistry as a pair of mismatched buddies forced to work together rather than apart. For the ladies, Coster-Waldau also oozes sheer masculine charm, while Butler often chews up the scenery with pomp and swagger. Both actors are no stranger to the swords-and-sandals genre – the former from the HBO series ‘Game of Thrones’ and the latter of course from ‘300’ – and have no trouble convincing us of their place in Egyptian mythology. Rush also lends his trademark eccentricity to Ra, looking just at home on his solar barque.

And so like last summer’s ‘Hercules’, ‘Gods of Egypt’ rises above the ashes by delivering two hours of solid sword-and-sorcery entertainment with dashes of self-aware humour. There is swashbuckling adventure, romance, epic battles and plenty of visual grandeur to meet its mad ambition with lunatic conviction. That it is overstuffed is part of its excessive nature, but you can’t argue that it doesn’t fill you with a sense of awe and captivate and delight you more than you expect it to. 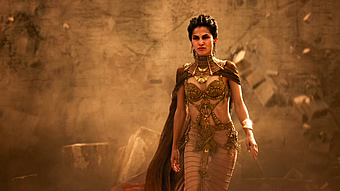