Synopsis: Summoned by the mysterious black sphere known as “GANTZ”, humans are coerced into fighting an existence known as “seijin” or aliens that take on various forms …

Protagonists Kurono (Kazunari Ninomiya) and Kato (Kenichi Matsuyama) find themselves in an outrageous situation from which they cannot escape unless they exterminate enemy aliens. Kurono chooses to fight for survival while Kato refuses to engage in battle, rejecting the world that is controlled by vio lence. Kurono, Kato and the others sharing the same fate are pushed to their limits as emotions clash. In their relentless battle against the aliens, what is the ultimate decision they will make in this absurd world?

GANTZ, the charismatic manga series that attracts readers with its out-of-the-box plot – about people getting spared from death only to be summoned by GANTZ to battle enemy aliens – debuted in the July 2000 issue of Weekly Young Jump (Shueisha). It is a sci-fi action manga, one of the magazine’s most popular series, whose 290volume “tankobon” comic books have sold over 13.5 million copies (as at November 2010).

GANTZ is first of the two movies (the other being “GANTZ: Perfect Answer”, a sequel that follows GANTZ, which should be due to release in Singapore too!) adapted from the manga and anime of the same name. A whole lot of hype is made out of the movie, since there was much anticipation owing to the popularity of the manga and anime in the Japan local community as well as overseas. Does this live-action movie truly live up to its name?

One of the most anticipated aspects of the movie is how the action sequences would turn out to be. On this regard, a generous budget of USD$22 million was spent on CGI, stunts, and special effects exclusively. Other costs such as the special suits that gave the characters superhuman powers, reportedly costs USD$6000 each and thus the total movie budget amounts to approximately USD$45 million. Moreover, having the top-notch members in the production team means quality in the CG work. Indeed, the graphics are extremely fine and seamless that it’s easy to get sucked into the world of made believe. However, hard-core GANTZ anime and manga fans may get slightly disappointed that nudity and violence is toned down for the life-action movie, so as to engage a larger audience crowd. Having said that, it does not imply the movie is anything less than a solid adaptation of the manga and anime.

GANTZ consists of three story arcs. In each story arc, the people who are saved from their deaths have to exterminate the aliens in order to live on in their real lives. The aliens not only take on different forms, but interestingly exhibit different traits. As mentioned, even though the nudity and violence is more toned down, it is still the selling point of GANTZ. Hence the alien exterminations do contain a certain amount of gore that can get a little over the top. There is not too much to expect from the action sequences, since the characters are supposedly to be amateurs, being forced from their regular lives to partake in the battle with the enemy aliens. However, kudos for keeping the atmosphere tensed up and thrilling. Breath-taking, as you would say.

Narrative wise, the focus of the movie is placed on the character development of Kurono Kei (Ninomiya Kazunari). Fluctuating back and forth from reality and the world of GANTZ was initially a mental torment, but Kurono gets tougher and tougher with each time. As the movie progresses, he arrives at an enlightenment, finding meaning and answer to his existence, thus awakening his heroic instincts. This gives an emotional depth to the movie. The relationship between Kurono and Kato Masaru (Matsuyama Kenichi) also provides a basis on which the story progresses.

Moreover, the two main characters are outstanding and well-loved actors in their generation. Ninomiya Kazunari, a popular idol from Johnny’s group Arashi, proves depth in acting through his known roles in Clint Eastwood’s movie, “Letters from Iwo Jima”, as well as the award winning role in the television drama “Ryusei no Kizuna”. On the other hand, Matsuyama Kenichi is known for his versatility in acting, exemplified by his roles in successful manga adaptations of “Detroit Metal City” and “Death Note”. Definitely another perk to catch the movie!

The end of the movie hints at the beginning of something new. The movie ends with a nice lead-in to the sequel, which hints at the revelation of the mysteries behind GANTZ. It seems like what all you see is not all you get! The movie is plain addictive, get going and find out the perfect answer!

(To sum up: violence begets violence, toughness begets a greater toughness. A spectacular Japanese export not to be missed! ) 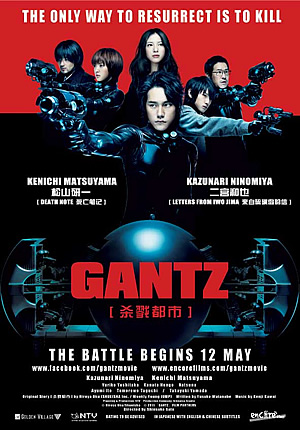 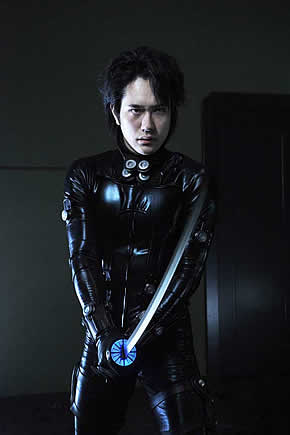 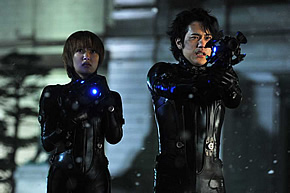