Synopsis: Los Angeles, 1949. Ruthless, Brooklyn-born mob king Mickey Cohen (Sean Penn) runs the show in this town, reaping the ill-gotten gains from the drugs, the guns, the prostitutes and-if he has his way-every wire bet placed west of Chicago. And he does it all with the protection of not only his own paid goons, but also the police and the politicians who are under his control. It's enough to intimidate even the bravest, street-hardened cop...except, perhaps, for the small, secret crew of LAPD outsiders led by Sgt. John O'Mara (Josh Brolin) and Jerry Wooters (Ryan Gosling), who come together to try to tear Cohen's world apart.

Crazy, Stupid, Love alumni Ryan Gosling and Emma Stone once again share the screen – and the bed – in this quasi period drama about how a clandestine group of Los Angeles police officers supposedly shattered the legacy of real-life megalomaniacal mafia kingpin Mickey Cohen in the late 40s. The former is a member of the elite task force headed by Josh Brolin’s Sgt. John O’Mara, a straight arrow ex-soldier who dispenses justice with the laser-like intensity of Judge Dredd, and the latter is Cohen’s unwilling moll, a disturbingly stereotyped damsel in distress.

As it turns out, Gangster Squad, based on veteran Los Angeles Times journalist Paul Lieberman’s non-fiction book of the same name, has more to do with every possible permutation of bloodletting than the privy tale of Cohen’s rise and fall. The movie opens with a particularly violent scene in which Cohen tears a man into two by attaching him to cars pulling in opposite directions, throws you a deliriously offbeat catch-the-grenade car chase that is essentially a darker and more twisted version of Mario Kart and culminates in a grand fusillade of shots as the cops storm the gangsters’ turf.

It is, as you might expect, a pretty film. Which unfortunately, isn’t saying a lot about Gangster Squad as director Ruben Fleischer, responsible for more light-hearted fare like Zombieland and 30 Minutes or Less, prove that he doesn’t quite have the wherewithal to pull off another crime drama in the reins of genre standard bearer L.A. Confidential. Whereas the 1997 Oscar-winning film is a study in organised crime and police corruption, Gangster Squad is more populist entertainment than nuanced crime caper. That would be fine if the movie had dropped its pretensions, but then again, I might be asking too much.

Not the least of which is the movie’s feeble attempt at creating a climax midway through that not only fails to affect the characters it’s supposed to affect, but also comes off as being tragically half-hearted and far too predictable. Also casualties of the woefully underwritten script are the characters. Neither Stone’s character nor Brolin’s hardened cop is treated to any sort of dramatic layering, with the former relegated to the sole eye candy jostling for the attention of male viewers and the latter heartlessly single-minded in his pursuit of justice. Cohen is the undiluted psychotic with no redeeming qualities, fitting for the role of a Superman villain, but much less fitting for a movie that, at face value, is about him.

Perhaps the only one to be given moments to truly make his mark is Gosling’s morally estranged cop. At many points the compensating charm for Stone and Brolin – or even the embodiment of what Stone’s and Brolin’s characters should be – the apprehensive Gosling is at once the soft side of Brolin’s uncompromising cop and the strong side of Stone’s want-away girlfriend. In one of the best moments in the movie, Gosling questions Brolin’s authority, advises against his rash strategies and reminds him that he still has a wife and baby to take care of. It’s a scene that speaks to the reality of being human as opposed to being the untouchable superheroes everyone else seems to think they are.

That, ultimately, should have been Gangster Squad’s objective. If there was to be no depth to the story, the least the movie could do was line the characters with more personalities. Instead what we have here is a shadow of a crime drama that could be so much better. There are many who will adore the straightforward approach of Gangster Squad and even more who will find the set-pieces here visually attractive and entertaining. Those expecting an intimate retelling of a historically intriguing event, however, might want to skip Gangster Squad.

(More populist entertainment than nuanced crime caper, those seeking an intimate retelling of infamous mafia boss Mickey Cohen’s downfall should look elsewhere, but those searching for a slice of stylishly violent action will be thoroughly pleased) 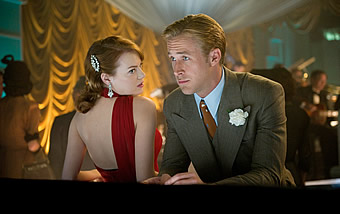 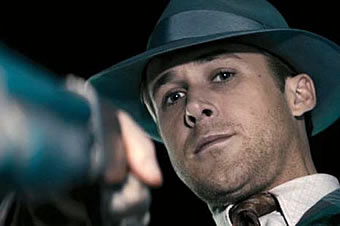 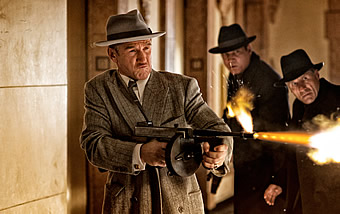 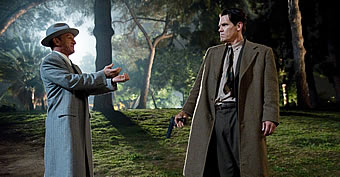 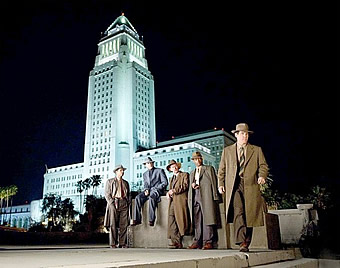