Synopsis: At the wedding of his daughter, Ken (Chow Yun Fat) is warned by Michael Chan (Andy Lau) of a mysterious tycoon who is plotting to kill him. Before he could react, a blast is heard and the newly weds fall into a coma. Enraged, Ken embarks on a mission to get revenge for his daughter, together with buddies Michael, Mark (Nick Cheung) Faye and Long Wu. Ken is invited to a gambling event set up by the tycoon to mock and tease him, but emerges victorious with the help of Michael, Mark and Faye, despite being induced. Will he find out the true identity and intentions of this malicious mastermind?

From Chow Yun Fat’s Ko Chun to Andy Lau’s Michael Chan to Chow Yun Fat’s more recent Ken Shek, three generations of gambling legends unite in the third instalment of Wong Jing’s ‘From Vegas to Macau’ franchise; and how perfectly apt really, since it was from the prolific mind of Wong Jing that these iconic characters of Hong Kong cinema were hatched and etched into the public consciousness. Yet, as befitting as it may be for him to be at the helm of this reunion party, it is also ironically the reason why we are quite so utterly disappointed at this lazily scripted, messily directed piece of overblown, over-the-top nonsense which Wong Jing is passing off as a fun Lunar New Year caper.

Not that the previous two chapters, which saw Chow Yun-Fat portray Ken as a playful and even zany riff on his 1980s ‘God of Gamblers’ character, were classics; yet imperfect and at least mildly shambling as they were, ‘From Vegas to Macau’ and ‘From Vegas to Macau 2’ were a boisterous mix of kinetic action and goofy humour buoyed by Chow’s effortless screen charm. That charisma is sorely lacking in this bloated follow-up – given how Ken is joined not only by Nick Cheung’s former D.O.A. accountant Mark, but also his master Ko Chun’s disciple Michael (Lau), Michael’s no-nonsense partner Kitty (Li Yuchun), a new nemesis named J.C. (Jacky Cheung) and last but not least a female equivalent to his male robo-butler named Skinny that the latter unsurprisingly takes a romantic interest in.

Continuing on the downward trajectory set by its immediate predecessor from the original, the sorry excuse of a plot that picks up from the events of the former has the love-crazed J.C. plotting to exact revenge on Ken for leaving Molly (Carina Lau) in her current comatose state. So J.C. detonates a bomb in the form of a robot designed to look like Michael at Ken’s daughter’s wedding (Kimmy Tong), and sets Ken and Nick up to look like they stole the US$15 million they recovered from Molly’s international criminal organisation D.O.A. in the last instalment. Thanks to Michael and Kitty, Ken and Nick manage to break out of a high-security prison in Hong Kong, where they seek refuge in Michael’s home in Singapore before going to a fictional island named Paradise Island in Thailand to confront J.C.

To nitpick at Wong Jing’s script for his story is perhaps missing the point; after all, Wong Jing makes no attempt to disguise that it exists merely as narrative glue to connect standalone gags to action-heavy set-pieces. Yet even on that basis, we are left wanting. One minute it seems like Ken and Nick are running from the Interpol, the next it seems that they have teamed up with the latter to take down J.C. But most inexcusable is how characters seem to pop in and out with no discernible reason, the best example of this how J.C. suddenly turns up with Molly’s assistant Kammy at Michael’s house to challenge everyone to a game of table tennis in order that they hand over Ken. Even more than the last sequel, this one presumes audience goodwill in overlooking the gaping holes and lapses of logic in its plotting.

Unfortunately, there is little quid pro quo in our willingness to suspend disbelief. Compared to the previous instalments, there are a grand total of three gags that work here – the first which has Ken lead his fellow inmates on a sing-along of the classic ‘Prison on Fire’ song ‘The Light of Friendship’ (友誼之光) at the prison where no less than the song’s Macanese singer and songwriter Maria Cordero is the warden; the second which has a traumatised Ken regard himself as Zhang Wuji and his friends as other ‘Jin Yong’ characters after watching a classic adaptation of ‘The Heaven Sword and Dragon Saber’; and the last which sees Michael and Kitty play a game of mahjong with Yuen Qiu and Lo Hoi Pang to the tune of Sam Hui’s classic ‘The Mahjong Heroes’ (or ‘打雀英雄傳’).

As much as we love to see Chow Yun-Fat, Andy Lau and Nick Cheung clowning around with each other, the rest of the gags are tired, forced and uninspired, so much so that the middle act set in Michael’s house passes by like a slog. Worse still, it is in this same act that we are forced to put up with Wong Jing’s inexplicable obsession with his robotic creation in the last movie, that he takes one step further by having Ken’s Robot Stupid try to get ‘fresh’ with Michael’s Robot Skinny in various ways. Only the surprise appearance by Law Kar-Ying as an ammo expert by the name of ‘Only Yu’ (you either get the joke or you don’t) enlivens the proceedings, though after that initial tongue-in-cheek name-play, Wong Jing can’t even seem to follow through with anything amusing.

Seemingly aware of his audience’s tedium, co-director Andrew Lau over-compensates in the last act with an excess of gunfire, pyrotechnics and CGI. Instead of actual locations, Lau has opted to build a number of grand sets to make up J.C’s elaborate underground lair, most of which he then proceeds to blow up in slo-mo theatrical fashion after equally dramatic shoot-outs. Still, the action hardly excites, and is often over in a blur. The only two sequences which leave an impression – but for the wrong reasons – are a completely gratuitous one where Lau unleashes his ‘Michael Bay’ ambitions by letting Robot Stupid and Robot Skinny take on four evil robots in ‘Transformers’ fashion before Nick Cheung turns into ‘Iron Man’ to finish them off, and a totally cringe-worthy showdown between Ken and J.C. in the latter’s (literally) highly charged laboratory where Jacky Cheung gets to show off his best ‘Harry Potter’ wand-waving impersonation before Carina Lau miraculously emerges from her coma to end everything off on yet another melodramatic note.

Despite the high-profile additions of Andy Lau and Jacky Cheung, ‘From Vegas to Macau 3’ is easily the weakest entry of the series, no thanks to a shambolic plot, imbecilic gags, and incoherent action. What fun we had watching Chow Yun-Fat reprise his role as Ko Chun and his hyperactive doppelganger Ken is sorely watered down here, as Wong Jing spreads his time amongst the other key players and even plays down his role. Instead of honouring the legacy of his past screen creations, Wong Jing does them an absolute disservice and even disgrace by bringing them together without meaning or motivation. There is only so much nostalgia can get you, and it is too easy to recognise all that star-power as bluff.

(Despite the star power, this third instalment of Wong Jing’s gambling-themed franchise is lazily scripted, messily directed and no more than overblown, over-the-top nonsense) 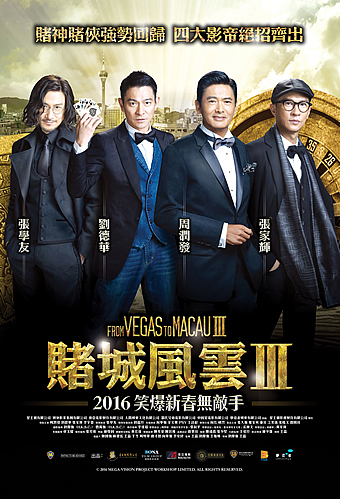