Synopsis: Senior Charlie Brewster (Anton Yelchin) finally has it all—he’s running with the popular crowd and dating the hottest girl in high school. In fact, he’s so cool he’s even dissing his best friend Ed (Christopher Mintz-Plasse). But trouble arrives when an intriguing stranger Jerry (Colin Farrell) moves in next door. He seems like a great guy at first, but there’s something not quite right—and everyone, including Charlie’s mom (Toni Collette), doesn’t notice. After witnessing some very unusual activity, Charlie comes to an unmistakable conclusion: Jerry is a vampire preying on his neighborhood. Unable to convince anyone that he’s telling the truth, Charlie has to find a way to get rid of the monster himself in this Craig Gillespie-helmed revamp of the comedy-horror classic.

Here’s one to kill off the glittery blood suckers we’ve all love to hate. Gone (not yet though, there’s still a sequel) are the brooding one and in comes the bad-ass, freaking ugly horrifying creature to grace the silver screen. Now that's what you call a vampire. Welcome to Fright Night.

Now, everyone knows how much of a nag i am about remakes and how Hollywood has bastardised the very essence of classic flick we all ave loved and enjoy. Now many of you would think, yes, it is time for an update and those of us squawking away are old geezers who wouldn’t let the old memory go and relent us as stubborn to begin with. Now, that isn’t entirely true. I wouldn’t mind at all for a total remake/re-imagined/re-whatever but please do it justice and at the very least make it better then the original yeah? And what about Mr Jerry, our horrifying vampire next door fare in this turn of the time update? It’s much to my pleasure, gladly to say that this horror flick did pass it’s test. Yes ladies and gentlemen, a remake that has test it’s litmus test and found it new heart of the new generation and old. And here what made it jump over the hurdle in this miraculous leap:

The horror humour: I don’t really know how many of you do remember or even attempted to get themselves blast to the past but in this remakes, this one doesn't just make a pro-copy of itself but it captures the spirit of the original. Perhaps I'll leave the remembrance aside and take this in perspective of the new comers. Fright Night plays it light hearted and never has it taking itself seriously. Well it did become serious but somehow, Craig Gillespei, the director whose only helm of the big screen is a little indie film called Lars and the real girl (great film by the way) has managed to surprise me of his capability of such mix genre. Many typical cliche moments abound but somehow made fresh with given twist.

The acting: The performances are equally inconsistent. Yelchin is like-able in the lead, and you find yourself rooting for him throughout, with his relationship with mother Toni Collette and girlfriend Imogen Poots is surprisingly believable. Christopher Mintz-Plasse fairs less well as Ed however, churning out the same performance that he's been delivering since his previous film even when his character taken an unexpected twist, nothing new came abound. David Tennant (Who? Heh.) as the illusionist Peter Vincent, who delivers a performance that's pretty familiar to a certain British comedian turn to Hollywood. But of cos I'll have to admit and come out to say, the film does truly belong to Colin Farrell, dominating as Jerry the Vampire. With the right combination of sexy cool and a touch of sinister, his presence just oozes with such life that its ironic that he plays a dead character. He plays the role quite well and with vigour but fun way, i wouldn’t mind letting him bite me at all.

The setting: Isolated suburban, the-might-a- well- be-a-cave-with-one-exit, engulfs us to such claustrophobia but yet living in an open world. A perfect setting for confusion among the cookie template of houses that's similar everywhere you turn.

I think Fright Night can safely give a nod to itself for allowing to not take itself too seriously — it’s not looking for Oscars, the script is upbeat, much witty lines delivered and it has fun with itself, which is also a good deal for the audience. It might have worked better as a Halloween release, but as it stands, Fright Night is a fun way to spend an evening, and a great surprise all round. It wants to be an amusing comedy horror ride, something to fill you and your buddy on those balmy lazy Friday nights, and one those grounds it’s extremely successful. It’s almost exactly what I hoped i would be signing up for and though it’s not perfect, it’s definitely recommended.

(PS: As most of the film takes place in the dark, you might wanna head towards the 2D version as the 3D nature would diminish the brightness of the film at various cinemas.)

(I’ll let this bite me anytime) 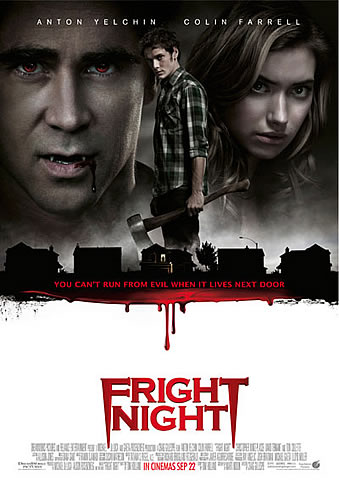 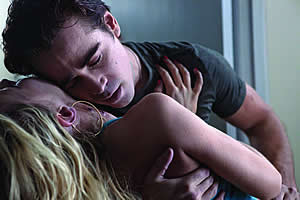 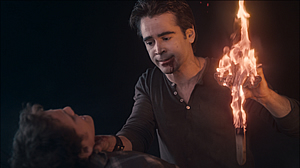 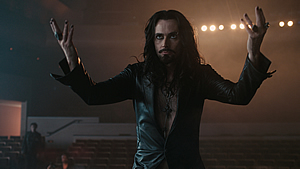