Synopsis: An action/thriller centered on a woman who faces down assassins sent by her ex, a mob boss, while holed up in her apartment.

What do you get when you throw Luc Besson, Quentin Tarantino and Takashi Miike into the blender? The answer: Everly.

From the start, Joe Lynch (Wrong Turn 2, Badassdom) obviously took a leaf out of a Luc Besson’s Europa production. Everly is slim on plotting but contains enough action sequences to differentiate itself from the Hollywood model. Hayek plays Everly, a woman who has been locked up in an apartment as a sex slave for years but decides to fight back one night. Her yakuza boss, Taiko (Hiroyuki Watanabe) hell bent on revenge goes on to send a bunch of assassins to finish her off. Unbeknownst to her assailants, Everly is all equipped to fight back to save herself and her loved ones.

Next, Lynch took on a QT’s Kill Bill approach to the material. When in doubt, kill. Never ever threaten a desperate, scantily clad woman with a mother and young child to protect. Everly is a tough chick with nothing to lose. She easily gets rid of every opponent that is dispatched to kill her, including fellow prostitutes and tonnes of Taiko’s henchmen in an over-the-top fashion. Despite the high level of gore and gruesome deaths, the exploitation flick never forgets to instill some wicked humour into it, like how a menacing dog and a lift load of baddies meet their untimely demise.

The thinly plot gets even weirder as a couple of Japanese villains dubbed The Sadist (Togo Igawa) and The Masochist (Masashi Fujimoto) are introduced to unleash unspeakable torture on Everly in the second half of the movie. Stuff that probably happens in a Takashi Miike’s movie is ridiculously imitated by screenwriter Yale Hannon and Lynch. By the time Taiko makes his grand entrance with countless fake deaths along the way, you are probably anticipating in what way Taiko is going to wind up dead. Is it by a gun, sword, grenade or worst of all, a horrifying death by sulfuric acid?

Except for some brief moments which she shares with her screen mom, her daughter and a dying henchman, Salma Hayek dominates the entire screen duration with her nubile figure and believable warrior tactics. Guys will sure relish at the sight of her toting guns even if Hayek’s character, sex slave-turned-badass mama is a tad hard to believe.

Shot in Serbia on a shoestring budget, Everly, which took place in an apartment, is a dumb popcorn flick through and through. It’s a physically demanding performance and Hayek nails it perfectly. At the very least, Hollywood knows whose door to knock on if they are doing another femme fatale feature. 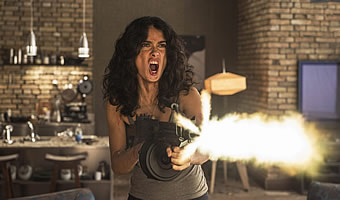 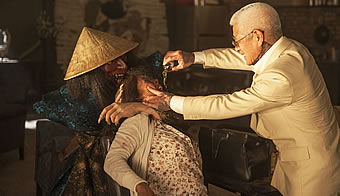 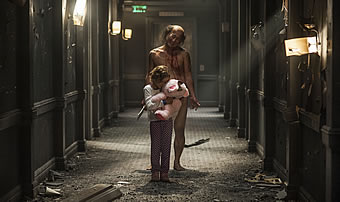 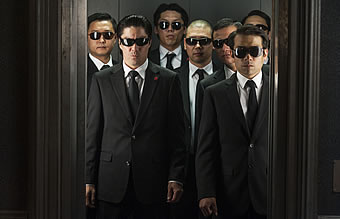