Synopsis: 20 years after the dimwits set out on their first adventure, they head out in search of one of their long lost children in the hope of gaining a new kidney.

While Jeff Daniels has recently won the Emmy for his outstanding performance in The Newsroom, the career of his co-star Jim Carrey and the Farrelly brothers seem to be fallen on hard times. Can you recall Carrey’s last hit by the way? What were the Farrellys thinking when they made The Three Stooges?

Dumb and Dumber To reunites most of the cast and the two directors from the 1994 hit. Too often, sequels pale in comparison to the original - and this one is no exception despite having both Carrey and Daniels back as the two loveable dimwits, Lloyd and Harry.

The opening cleverly sets up why the sequel took twenty years, but the movie that follows is a long dreaded affair. Scripted by the Farrellys and a few more guys - notably Sean Anders (Horrible Bosses 2, Sex Drive) - the actual story involves Lloyd and Harry going on another road trip to look for the latter’s long-lost daughter, Penny (Rachel Melvin). Along the way, a Nobel-winning scientist, his cheating wife and her lover are thrown into the story and mostly it's just tedious and silly.

Even for people who have not caught Dumb and Dumber on local television or cable, Dumb and Dumber To relies a lot on its two likeable lead actors instead of its backstory, if there is any to begin with. Sure there are some references to the original like Billy the poor blind kid, but the entire concept is supported by exhausting gags and terribly dated jokes, so much so that it fares more like a homage to the good old comedies in the 80’s and early 90’s than as a contemporary one.

Despite Carrey’s best efforts to liven things up and Daniels’ going all gung-ho with his character’s stupidity, it simply fails to deliver the laughs, at best the occasional chuckle. At times, you may even feel a tinge of sympathy for the actors. The once gorgeous Kathleen Turner being mocked for her looks and Rob Riggle’s twin brothers’ roles provide brief moments of delight.

If lowbrow jinks are your thing, the Farrellys has concocted plenty of them here. I on the other hand don’t really feel it is ticklish to watch slurpee being poured into one’s pants or people being constantly pushed into bushes. I totally get it. I mean, it’s dumb and dumber right? Bodily-excretion gags and racist jokes are supposed to be funny. Sad to say, this is so passé. The era of There’s Something About Mary and Me, Myself and Irene is over. Period.

At this point, I just want to give New Line a pat for giving this one up. Universal is pretty dumb in this case to pick a dead horse and repeatedly flogging it. 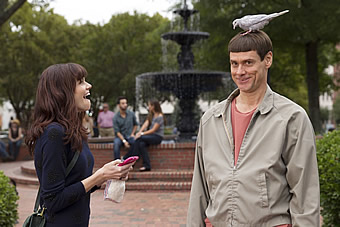 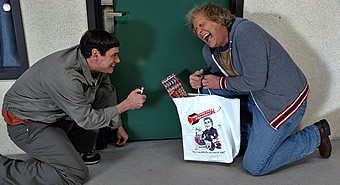 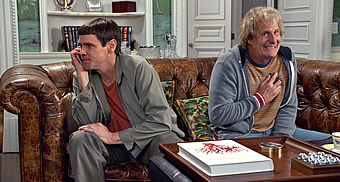