Synopsis: Sally Hurst (Bailee Madison), a lonely, withdrawn child, has just arrived in Rhode Island to live with her father Alex(Guy Pearce)and his new girlfriend Kim (Katie Holmes) at the 19th-century mansion they are restoring. While exploring the sprawling estate, the young girl discovers a hidden basement, undisturbed since the strange disappearance of the mansion’s builder a century ago. When Sally unwittingly lets loose a race of ancient, dark-dwelling creatures who conspire to drag her down into the mysterious house’s bottomless depths, she must convince Alex and Kim that it’s not a fantasy – before the evil lurking in the dark consumes them all.

Although Guillermo del Toro’s name is splashed prominently on the promo materials, it is first-time director Troy Nixey who is at the helm of this remake of a 1973 television movie of the same name. Nonetheless, it was del Toro who conceptualised the remake after recalling the frightening experience the original gave him as a child, and who co-writes and produces this movie. Yes, his prints are all over the movie- though this time, they are much less indelible than his previous works.

Retaining the premise of the original, del Toro’s version is once again set in a spooky house, the kind with decades of history behind it, secrets behind its walls and whispering voices along its corridors. The latter is literal, as a tense prologue set in the late 1800s where we witness the disappearance of the mansion’s original owners, Emerson Blackwood and his son, establishes the other non-human inhabitants in the basement- nasty tiny critters who are after kids’ teeth. Left abandoned and in ruins for more than a century, the mansion in present day becomes the centrepiece of architect Alex’s (Guy Pearce) restoration works- which also becomes the movie’s excuse later on for his reluctance at moving out.

From then on, del Toro and co-writer Matthew Robbins deliver a straightforward narrative where Sally gets terrorised by the creatures every night when the lights go out, try to convince Alex and Kim in vain of the horror lurking behind the walls, and then gets proven right when both adults are confronted by the very monsters. Del Toro weaves some mythology that links the goblins to the tooth fairy and their origin through the centuries, but largely the background, while interesting, adds little to the main storyline.

If the movie turns out surprisingly engaging, credit must go to Nixey for skilfully translating del Toro and Robbins’ screenplay into some truly intense sequences. One of them is partly shown in the trailer, where one of the creatures finds its way under Sally’s bedcovers; another has the creatures attempting to kidnap Sally while she is alone in the bathroom. Nixey also stages the climax thrillingly, the culmination of some excellent work in pacing and building atmosphere that keeps the creatures hidden from full view until late into the film.

He also has a terrific child actor in Madison, probably best known for her role in this spring’s ‘Just Go with It’. Madison doesn’t overplay her role even when her character is supposed to be freaking out, and the restraint she shows goes a long way in earning her audience’s sympathy at her predicament. The same however can’t be said of her adult stars. Holmes looks spent most of the time (probably from her marriage to Mr Tom Cruise) and Pearce, usually excellent, reciprocates by not bothering to invest much effort into his role.

Perhaps it is also because they are astute to know that even with del Toro’s participation, this is really del Toro-lite material. Sure, you can recognise his trademarks in the film’s play on childhood fears, and the mythological world of sinister creatures that could probably fit into ‘Pan’s Labyrinth’, but this is nowhere near the brilliance of his usual works. Nixey does a fine job as a first-time feature helmer- unfortunately, his best efforts barely transcend the all-too simplistic plotting. As an old-fashioned creature horror however, his film works well with an efficient combination of suspense and thrills- though it is likely that most modern-day audiences will find it coming up short. 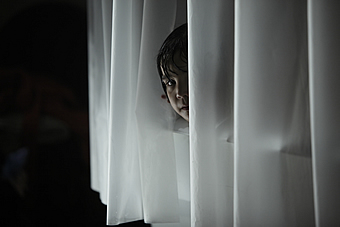