Synopsis: A conflicted manager on a business trip is intrigued by an elderly worker and investigates his life. A young father receives a letter that brings him to a foreign land, where old emotions come unburied.A visiting professor from overseas sets a student's heart fluttering, while having to deal with his own. Different characters, different relationships, the same humanity; stories about the distances between us and how we live with them.

Three stories of loss, regret and reconciliation; three different persons, each played by Taiwanese actor Chen Bolin, coming face-to-face with someone they used to be close to but have been separated from for some years now; three up-and-coming young directors making their big-screen debut under the tutelage of executive producer Anthony Chen. That, in a nutshell, summarises the elegantly titled ‘再见，在也不见’ (which literally translated means ‘Goodbye, Not Seeing You’), an anthology which contemplates the theme of distance in relationships that manifests itself geographically, temporally and perhaps most significantly, emotionally.

Opening the triptych is perhaps its most enigmatic short, ‘The Son’, by China’s Xin Yukun, that sees Chen play a manager on a business trip to Guangxi who sees a familiar face in an elderly worker tending the grounds at his company’s shipping terminal. With a poignant supporting turn by veteran Hong Kong actor Paul Chun, this understatedly moving segment finds its emotional centre in an estranged father-son relationship in which the latter learns to come to terms with the years the former has been absent without the sort of confrontation that you would expect from a shrill Taiwanese family drama. Only right at the end does Xin allow Chen’s character to let loose his anguish, and by so doing, also ensures a gut-wrenching end to an otherwise subdued mood piece.

‘The Lake’ by our very own Tan Shijie is next, unfolding as two parallel narratives at two different points in time – the first with Chen’s Chen De Ming as a young father who receives a letter from a teenage friend Lin Ren Zheng (Yo Yang) who is due to be executed in Changi Prison in two days; and the second with De Ming and Ren Zheng (played by Wei Han-Ding and Cheng Huan-Lin respectively) in their teenage years in the Taiwanese countryside where they spend most of their afternoons together by the titular lake. The latter has Zhu Shen-Long playing De Ming’s father, who disapproves of his bookish son hanging out with the roguish Ren Zheng – and if you’re thinking shades of homosexual attraction between the pair, let’s just say that it is precisely what Tan hints at here.

Just as in ‘The Son’, there is a gut-wrenching end here, not by Ren Zheng’s death by hanging which we already expect from the start, but rather the revelation of just what led to the two boys to be cast adrift from each other all those years ago. Whereas the other shorts only hint at the past, Tan’s entry acts out the relationship between the pair of characters before their eventual estrangement, which is also the reason why his is probably the most emotionally compelling. Its final image of De Ming returning to the lake with Ren Zheng’s ashes where their friendship first began also claims the honour of being the most elegiac concluding shot among the rest, so if we’ll have to pick a favourite among the three, this will be it.

The appropriately titled ‘The Goodbye’ by Thailand’s Sivaroj Kongsakul concludes the triptych with Chen playing a Shanghai university professor named Chen Zhi Bin who visits Bangkok to deliver a lecture on modern-day Chinese youth in the Internet era. After he is reacquainted with his former Chinese lecturer (Jiang Wenli) who is now teaching at the same Thai university, Zhi Bin reveals that he only accepted the offer because he wanted to see her again. Their reunion is juxtaposed against a possible romance with Pim (Chayanit Chansangavej), a local Thai-Chinese university student who is assigned to be Zhi Bin’s guide during his time in Bangkok and who develops a crush on the professor.

Notwithstanding an affecting supporting turn by veteran Chinese actress Jiang, this restrained story of repressed love and unrequited feelings is probably the thinnest of the three, not least because neither Zhi Bin’s previous relationship with Jiang’s Professor Xie Hong or Pim’s attraction for Zhi Bin is satisfactorily fleshed out. Right up to the end, it never builds a convincing enough reason for both to co-exist with each other, especially since the former is mutual and the latter seems to be only one-sided. But, like Xin and Tan’s entries, Kongsakul’s one possesses a rueful grace, only allowing its main character to display the depth of his longing for his former lover right at the end.

As an omnibus, ‘Distance’ is probably the most consistent we have seen, which is both its strength as well as its weakness. Indeed, there’s no denying the filmmaking is artfully polished, and its quietly reflective style deliberate in ensuring that the three shorts are tonally similar. Yet it is also precisely this same quality that makes it a tad boring, so much so that we wonder how much the three individual directors had suppressed their own filmmaking inclinations in favour of a unifying ambience. Regardless, by the time Stephanie Sun’s soulful voice takes over at the end credits for the titular theme song, you’ll probably be thinking about a certain someone in your own life that you used to be close to but have since grown distant from, whether out of choice or circumstance – and that in itself is a testament to how subtly powerful the film has been.

(Often subtly moving and artfully elegiac, this triptych of shorts on loss, regret and reconciliation is an intimate gem) 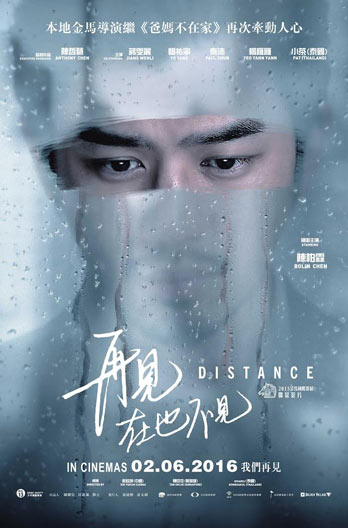