Synopsis: The team who brought you Despicable Me and the biggest animated hits of 2013 and 2015, Despicable Me 2 and Minions, returns to continue the adventures of Gru, Lucy, their adorable daughters—Margo, Edith and Agnes—and the Minions.

As the ‘Minions’ movie demonstrated, too much of the adorable, pill-shaped, banana-obsessed creatures isn’t necessarily a good thing; indeed, they were probably best in smaller and supporting doses, playing bumbling sidekicks alongside Gru as he went about his villainous, then anti-villainous, ways in ‘Despicable Me’ and ‘Despicable Me 2’ respectively. Unfortunately, they aren’t given much, if anything, to do in this threequel, who as it turns out, are fed up of working for a good guy and decide to part ways with Gru early in the movie. That means they are here no better than occasional irreverent comic distractions, much like how Scrat was in the ‘Ice Age’ movies, notwithstanding a laugh-out-loud jailbreak sequence set to Pharrell Williams’s hit ‘Freedom’.

And unfortunately, that sums up how ‘Despicable Me 3’ feels as well – always distracted, sometimes amusing, but never really engaging. It wants to be about the rivalry between Gru (Steve Carell) and all-new supervillain Balthazar Bratt (Trey Parker), the latter a disgruntled former 80s child TV star who had fallen out of favour with the general public after hitting puberty and has since turned to a life of crime. It wants to be about Gru’s new fellow super-agent wife Lucy (Kristen Wiig), who is trying to be a mother to his three adopted daughters – Margo, Edith and Agnes. It wants to be about Gru reconciling with his long-lost twin brother Dru, an empty-headed but successful pig farmer who yearns to follow in their father’s footsteps of being a super-villain. Amidst all this, it also wants to be about Agnes and her longing to find a unicorn.

No wonder then that the sweetness between Gru and his daughters from the earlier two movies is somewhat lost here. No wonder too that the Looney Tunes-esque gags seem to unfold at an almost breakneck pace, sacrificing wit and inventiveness for sheer visual spectacle. No wonder that it all feels drawn-out and overstuffed, cramming too many plot lines without ever developing any satisfactorily – except perhaps for the complicated sibling relationship between Gru and Dru, seeing as how the former tricks the latter into helping him break into Bratt’s Rubik’s Cube-like fortress perched at the tip of a pyramid. It is understandable how returning writers Ken Daurio and Cinco Paul had felt the need to up the ante with each subsequent instalment of the franchise, but like the ‘Minions’ spinoff, less is sometimes a lot, a lot more.

There are good bits though: Bratt, complete with shoulder pads, pump sneakers and 80s pop tunes of Michael Jackson, Van Halen, a-Ha and Madonna among others, is a hoot; so too the barrage of other 80s references, including Bratt’s army of weaponised figurines christened ‘Bratt Pack’. Carell and Wiig lose none of their verve reprising Gru/ Dru and Lucy, and Parker is a lively, dynamic addition to the ensemble voice cast – in particular as a substitute to Russell Brand, whose Dr. Nefario spends the movie frozen in carbonite. Co-directors Pierre Coffin and Kyle Balda try their best-est to keep up the energy and enthusiasm from start to finish, and largely succeed in spite of a somewhat tedious detour on Dru’s fictional European island in the middle act.

Yet even on the same level of fun as its predecessors, ‘Despicable Me 3’ falls way short. We wish it were simply that what was once fresh has now become familiar; but oh no, the gags are nowhere near as funny nor as clever, and even the minions are starting to lose their subversive edge. Whether that is the cause or consequence of having too many things going on at the same time is anybody’s guess, but the sum of some hilarious bits, some tedious ones and a lot of underdeveloped elements in between is a sporadically amusing affair that hardly lives up to the charm of the previous two chapters. When even kids below the age of five find their patience tested, it’s as sure a sign as any that this franchise is fast turning yellow.

(Nowhere near as clever, funny or sweet as its predecessors, this threequel is a disjointed jumble of some amusing, some tedious and mostly under-developed parts) 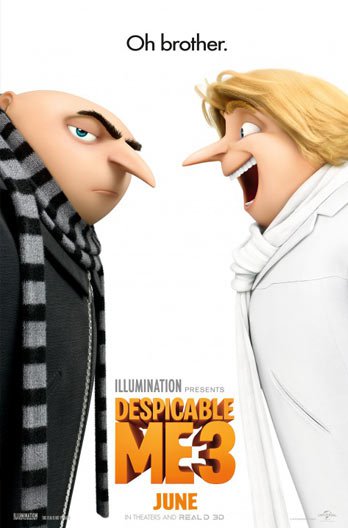