Synopsis: In DELIVER US FROM EVIL, New York police officer Ralph Sarchie (Eric Bana), struggling with his own personal issues, begins investigating a series of disturbing and inexplicable crimes. He joins forces with an unconventional priest (Edgar Ramírez), schooled in the rituals of exorcism, to combat the frightening and demonic possessions that are terrorizing their city. Inspired by the book, which details Sarchie’s bone-chilling real-life cases.

It wasn’t too long ago that Jerry Bruckheimer’s name would appear on at least one summer tentpole every year, but the years since have not been kind to the powerhouse producer, whose name is today more synonymous with reality TV shows and the CSI procedural than a pricey big screen feature. It’s even stranger that one finds Bruckheimer’s name on the poster of an exorcism flick, but the novelty of finding out just what Bruckheimer can bring to a horror movie is hardly worth sitting through two hours of pure banality.

“Inspired by the actual accounts of an NYPD sergeant”, the crime/ horror mash-up draws its inspiration from the book “Beware the Night” by a certain Ralph Sarchie (played by Eric Bana), who in real life teamed up with a maverick Jesuit priest Father Mendoza (Edgar Ramirez) to investigate criminal activities with a paranormal twist in and around the Bronx. In this instance, Ralph finds himself on the hunt for a Iraqi war veteran named Santino (Sean Harris), who encountered a source of primordial evil while on his tour of duty in 2010 and subsequently brought it back when he came home with two other buddies.

As how these cases are oft to present themselves, the mystery begins with a series of seemingly unrelated cases – a woman who throws her child into the lions’ pen at the Bronx zoo, a hooded painter at the scene who vanishes when Ralph tries to track him down, a suburban house whose tenants claim is possessed and which becomes the gruesome scene of death of a painter. Ralph, as it so happens, has a sixth sense for such cases which mean more than what meets the eye, so it isn’t long before he draws the connection between him and pinpoints the dishonourably discharged Santino as the key suspect.

Even so, it does take a fair bit of persuasion by Father Mendoza before Ralph is convinced that he is dealing with an evil spirit (or demon for short) which will not only question his own lukewarm religious beliefs but also threaten the very souls of his family – as the case progresses, his daughter begins to hear scratching noises from under the floorboards inside her room. A confession is in order, but not before Father Mendoza reveals himself to have found redemption in the faith by confessing the sins of his youth before God and embracing God’s path of forgiveness.

Such elements of faith and the eternal battle between the forces of good and evil are not new to director and co-writer Scott Derrickson, whose own ‘The Exorcism of Emily Rose’ was one of the better exorcism thrillers which we have seen in recent time. Nonetheless, his latest sees him try to combine such genre tropes with that of a police procedural, and the result is unfortunately a cut-rate ripoff of ‘Seven’ that isn’t half as compelling or convincing, try though it does with a mix of supernatural mumbo-jumbo with a generous dollop of grisly violence and gore.

Yes, it doesn’t take much to tell that Derrickson is struggling with the material. Instead of unsettling his audience the way he did with ‘Emily Rose’, he opts for cheap jump scares, mostly of the animal variety. His idea of building up the tension also relies too conveniently on having a rain-soaked night backdrop each time and thereafter having his characters walking down darkened spaces with a flashlight. Neither for that matter do the scenes of demonic horror terrify as much as they should; indeed, the climax which details a full exorcism in its six-stage glory comes off hokey and contrived rather than authentic no thanks to Derrickson’s over-reliance on Hollywood-style sound and special effects.

That the film is not a complete washout is credit to solid acting by Eric Bana and Sean Harris. Bana brings a suitably working-class grit to his character, his performance one of gravitas and poignancy. Comedian Joel McHale makes a good foil to Bana, called upon to deliver a string of witty and sometimes sarcastic quips which are probably more entertaining than the actual crime itself. Harris is intense as he should be, but the same cannot be said of Ramirez, whose spirit seems barely there in most of the scenes – which certainly doesn’t help the caricature of a character which Derrickson and his co-screenwriter Paul Harris Boardman have concocted.

But in a movie where too few notes ring true, Father Mendoza is but one of the flaws which you’re likely to dismiss along with the rest of the movie, no matter that the film purports to be inspired by fact. It is an interesting genre experiment of course, one that twists what could have been a straightforward police procedural into a horror hybrid by way of an exorcism flick; but Derrickson seems to have bitten off more than he can chew, losing his feel not just for the latter genre which he had staged successfully with ‘Emily Rose’ and ‘Sinister’ but also for the former which admittedly he has no experience with. Rarely scary or engaging, ‘Deliver Us from Evil’ will have you screaming ‘deliver us from this evil’. 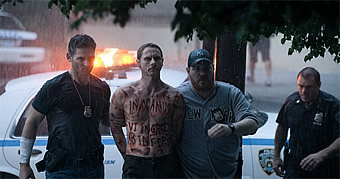 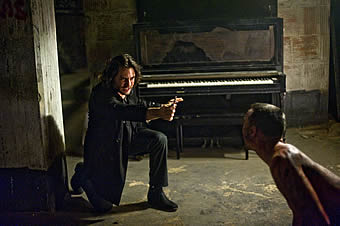 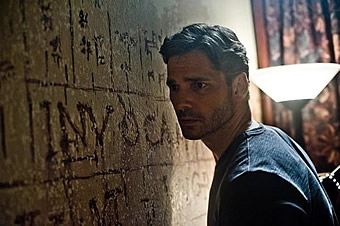