Synopsis: Dead Awake centers on Kate Bowman (Jocelin Donahue), a young woman who discovers an ancient evil stalking people who suffer from sleep paralysis. As Kate finds herself besieged by this terrifying entity, she teams up with a local artist (Jesse Bradford) to try and stop it. With a skeptical doctor (Lori Petty) questioning her sanity, Kate turns to an eccentric expert on sleep disorders (Jesse Borrego) who opens her mind to the horrifying truth: Kate has unwittingly opened the door for this evil to enter our world and has put the lives of her friend Linda (Brea Grant), her father (James Eckhouse), and everyone else close to her in danger.

Considering that sleep paralysis (an affliction which renders one unable to move or react while waking up) has been a relatively well-documented phenomenon – surely you’ve heard or read about the condition, or know someone who’s recounted a paranormal encounter with congruent details, or even experienced it yourself – remarkably few horror films have used it specifically as a premise for their storylines. And by far, some of the scariest movies made manage to deliver the chills because they root themselves in some form of relatable reality (think The Ring – who knew chain letter-style curses manifested in then-everyday VHS technology could be this terrifying?) or shared myths (the somewhat-based-on-a-true-story exorcism tales of The Conjuring or The Exorcism of Emily Rose).

So you’d think the concept behind Dead Awake at least has that going for it – except that not only does this film fail miserably in realising the potential of its premise, the most frightening aspect of this horror flick is how mind-numbingly unexciting it manages to be from start to end. Surprising, given that Dead Awake largely banks on the name of its screenwriter Jeffrey Reddick, who is best known for being the scribe that gave rise to the underrated Final Destination series – a franchise that truly provided its fair share of original and gratifying popcorn-scattering scares.

Featuring a largely unfamiliar cast, director Philip Guzman’s (A Kiss and a Promise, Desdemona: A Love Story) first foray into the horror genre starts off by depicting one of several episodes of sleep paralysis that Beth Bowman (played by Jocelin Donahue) has experienced in her bedroom – there clearly is an other-worldly presence, but nobody’s sure what it is yet. Nobody really seems to be able to help her out of her predicament, not even her reassuring artist boyfriend Evan (Jesse Bradford of Flags of Our Fathers, Swimfan, Bring It On fame and arguably the most recognisable name here) or her twin sister Kate (also played by Donahue), who is convinced by the ostensibly scientific reasons behind Beth’s psychological distress and advises the latter not to resist the malevolent force when it assaults her in her next occurrence of sleep paralysis.

Unfortunately, Kate’s advice has tragic consequences for Beth; a combination of both guilt and the experience of having seen the same ghoulish being in her own dreams drives Kate on an all-too predictable quest to seek answers and to prevent other sufferers around her from succumbing to the same fate. Unfortunately, as much as the story is uninspiring, the characters are mostly bland. Mexican-American actor Jesse Borrego leaves more of an impression but for all the wrong reasons. Distastefully caricaturised as an other here (whether intentional or not), he plays the unorthodox doctor Hassan (completely unnecessary Arabic name there), who might as well be a modern-day shaman in western garb. Gangly, unkempt and in essence majorly awkward, he inhabits a house full of cultish idols from around the world. Keep your eyes peeled and you’ll even spot a statuette of the Bodhisattva Guanyin somewhere in there.

Other things don’t quite make sense. Funny that Hassan, who’s spent his life researching the topic on sleep disorders and seems to hold the ticket out of everyone’s misery all along, should only reveal his solution of ridding the nefarious affliction in the last one-third of the film when Kate and Evan finally seek his expertise. The plot also loses credibility points when you consider the “Hag” (or so the nightmarish creature is called) has been known to kill off others throughout history with the same modus operandi – heck, if this is something so universal that could happen to you or me during an episode of sleep paralysis, it had better feel darn believable. Or at least tap on the deepest recesses of moviegoers’ minds in creative ways.

For example, just think about the particularity of the paranormal instances in The Ring, The Conjuring or just about all the best horror flicks – they’re creepy because while there’s an element of realism, it leaves something to the imagination that allows fear to fester. In this film, however, the banal stylings of the demon, revealed all too early on, leaves much to be desired. Sadder is the fact that one of the film’s most interesting moments is a laugh-out-loud cringeworthy scene that involves Hassan fumbling with and dropping a life-saving syringe in a key exorcism scene.

Much of the film trudges on tediously otherwise. If the movie is attempting to pay homage to Wes Craven and the great horror mainstays of the 80’s, as it purports to be, the film does this in the most perfunctory way possible by checking off a list of genre clichés and executing them in dull-as-dishwasher fashion. Malignant spirit crawls up on bed to wreak havoc on its victim – check. Protagonist looks up the origins on the internet and seeks help from unorthodox authority figures – once more, check. Murky bathtub with body sinking under the bathwater – not again. Something awful happens when somebody is in the shower – enough already.

In all, it feels like the production crew isn’t invested in making anything that rises above mediocrity here. Nobody seems interested in adhering to Basic Principles of Horror 101: build up the sense of dread so thickly we don’t-want-yet-need to know what’s appearing around the corner, or else deliver a solid jolt of a scare when we least expect something offensive to the senses to happen. But no, we can’t remember any instances of either since everything is foreshadowed to death. Certain aspects of the set-up also look so embarrassingly amateurish (the mock-ups of newspaper clippings and video-sharing websites featured, for example) that the whole movie could well pass off as a high-school project submission for film class. If you don’t know what sleep paralysis feels like, we’ll hazard a description here – spending 100 minutes staring at a theatre screen waiting for something remotely compelling to happen before being allowed to dash for the exit doors.

(Paralyzingly uninspired, you might just fall dead asleep watching this. The money’s probably better spent on just about anything else showing on screens right now) 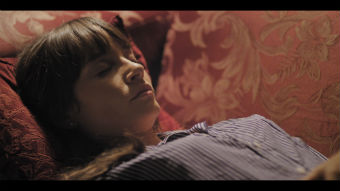