Synopsis: Lu Ziming, a security expert in Southeast Asia, was the only survivor from an accident caused by his boss Leon two years ago. According to a reliable source, terrorists may launch attacks on a bidding meeting for a Sino-Euro oil-gas plant project. Ziming is hired to safeguard the meeting as a security consultant. To his surprise, he encounters Leon who ought to have died two years ago and it occurs to Ziming the meeting might be a trap. Meanwhile, a female journalist Mo Lan accidentally witnesses the whole process and is involved as well. Thus, Ziming and Mo Lan join hands to find out the big boss and the conspiracy behind.

The opening of the movie has Zhao’s character donning a jetpack and flying through the sky. Much liked Marvel’s Falcon, he uses his mechanical wings to soar across the clouds before diving in to kill his target with a machine gun.

Before we go on, let’s just pause briefly to analyze this fleeting scene, shall we?

Are we watching Zhao played a Chinese comic book hero? Or is he playing an ordinary security expert out for hire? And why are we subjected to such dodgy CGI action sequence which obviously make no sense in a supposedly grounded action movie.

After appearing in more than a dozen movies and television serials since 1993, mainland martial-arts star Vincent Zhao Wenzhuo finally made his directorial debut in Counterattack, an embarrassingly copycat version of Wu Jing’s Wolf Warrior.

The prologue very well sets the tone of what to come confirming it’s both amateurish and cringing. Zhao plays Lu Ziming, a security agent being tasked to oversee an oil project in a fictional country named Kunlang. But before you even dipped your hands into the buttery popcorn, Lu is being framed for a murder by the country’s top man, an evil General who is involved in some shady oil deal with the Americans. Because simply put, Chinese are good, Americans are bad. Running along with Lu is a journalist, Mo Bai (Jiang Yiyi) who conveniently has proof of Lu’s innocence. Predictably, Lu needs to outfight and outrun his enemies before convincing to the world that he is innocent and that includes his ex-comrade in arms, Leon (Diego Dati) who is tasked to kill him.

Consider that Zhao has worked with the best in the HK film industry liked Tsui Hark, Yuen Woo-ping and Gordon Chan over the years, he seems to be at a loss in his directorial debut. The plot plays second fiddle so long the action suffices for this sort of movie. Man framed. Man on the run. Man fights to prove his innocence. Man wins in the end. A simple formula which explains why the HK action cinema in the 80’s and 90’s was such a success.

But Counterattack never delivers a single decent action sequence that is worth the admission ticket. The jungle chase scene is one prime example of why it lacks any innovation given that nature has blessed the action choreographer and director plenty to work on. Zhao needs to first refer to Sammo Hung’s understated Eastern Condors for ideas beside basic gun-firing and boy scout’s booby traps. It does however end with a pretty funny joke on using socks for a nice cup of tea though.

As ridiculous as it sounds, Mo Bai is later on trained to be a sniper by Lu which obviously puts many soldiers to shame as their training probably took months alone as compared to Mo who turned out to be quite a shooter within a couple of days. Since Zhao can’t afford the presence of Scott Adkins and Frank Grillo, he turned to Diego Dati (who had a bit role in Jackie Chan’s Vanguard) and Ukrainian stunt performer Myra Mala. Both are more than competent martial artistes sadly their sparring against Zhao is hampered by haphazard editing and unimaginatively poor choreography which makes it a bitter pill to swallow.

Zhao’s directorial debut is in fact a VOD release which went right to streaming in China. The narrative here is not exactly deep and most of the casts’ halting English doesn’t help in the storytelling either. Furthermore, none of the characters are particularly interesting. Even a one-note Wu Jing is way better than a one-note Vincent Zhao. The movie ends with a cheesy, laughable epilogue which hints of a sequel. If you think the Wolf Warrior series is bad and sells way too much patriotism, Counterttack takes it a notch up. At least the former offers lots of slick B-action fare, there’s nothing worth catching here.

(Awful story, bad hand-to-hand action- watch it at your own risk!) 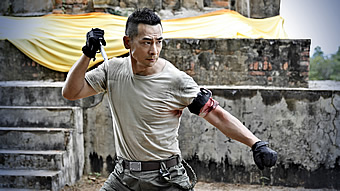 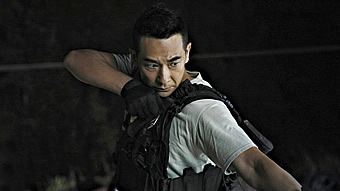 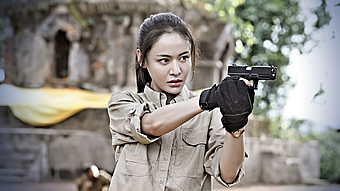 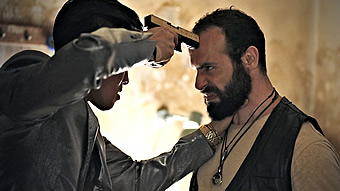