Synopsis:  In the action film "Colombiana", Zoe Saldana plays Cataleya, a young woman who has grown up to be an assassin after witnessing the murder of her parents as a child. Turning herself into a professional killer and working for her uncle, she remains focused on her ultimate goal: to hunt down and get revenge on the mobster responsible for her parents' deaths.

There’s really no point putting a movie like ‘Colombiana’ under a microscope, for you should know right from the start that it won’t stand up to scrutiny. But if you’re a hardcore action junkie, then you would know how to look past the straightforward plotting, the leaps of logic, and the sheer improbability of the premise to enjoy this sexy exciting shot of guilty pleasure.

Yes, we say sexy, for Zoe Saldana is quite simply the very definition of it in this movie. From the very first time she appears onscreen disguised as a drunken prostitute in a short revealing dress, we couldn’t take our eyes off the lady who seduced one of our own species on the planet ‘Avatar’ and brought warmth in the cold depths of outer space in ‘Star Trek’. Saldana will go even further in her first all-out leading action role to get into a black cat suit (without bra we may add) and scanty white undies, so we challenge you to avert your attention when she’s deciding what barely to put on.

And for that pleasure, we owe our gratitude to Luc Besson and Robert Mark Kamen, who have written a script tailor-made for Saldana to exude her sexiness. Besson has made a name for his female-empowering pics (see ‘La Femme Nikita’), and ‘Colombiana’ is no different. Saldana is here a lethal assassin-for-hire, her beguiling feminine figure a perfect cover-up for her deadly skills. Like last summer’s ‘Salt’, her character goes against gender archetype- which is also one of the reasons why Cataleya (named after the Colombian orchid that is also the film’s motif) is simply mesmerising to watch.

Besson and Kamen however are less adventurous when it comes to storytelling, sticking with genre conventions to weave a story about how our protagonist seeks revenge on the people who had assassinated her family. That backstory is covered in a surprisingly long prologue set in 1992 Bogota, where the 10-year-old Cataleya witnesses her parents gunned down in front of her by crime boss Don Luis (Beto Benites) and his right-hand man, Marco (Jordi Molla). Amandia Stenberg plays the young Cataleya, and the young wide-eyed child wows in an exhilarating chase sequence over roofs and along narrow alleyways to evade her enemies.

Cataleya makes it across to Chicago, where her uncle Emilio (Cliff Curtis) takes her in and teaches her the tricks of the trade. Saldana takes over from Stenberg fifteen years later, and director Olivier Megaton introduces Saldana with an elaborately staged hit inside the cells of a police station. The 10-min long setpiece is one of the highlights of the film, as Saldana slinks her way through the air ducts stealthily and skilfully to assassinate a prisoner in transit. If Megaton had set out to make an impression of Saldana on his audience, let us tell you unequivocally that he has definitely succeeded.

Like her previous hits, Cataleya leaves a drawing of her symbol over her victim in a bid to draw out Don and Marco- both of whom are now under CIA protection in New Orleans. In between the grand finale, Megaton has Saldana swimming through shark tanks, evading capture by FBI agents (among them Lennie James) and keeping her true identity secret from her artists boyfriend (Michael Vartan). But of course, Megaton reserves the bulk of her firepower for Saldana to decimate Don’s sprawling villa, though the most thrilling of the climactic showdown is a mano-a-mano fight in a bathroom filmed in the same raw gritty style as the ‘Bourne’ movies and utilising everyday bathroom appliances as weapons.

That sequence is also a demonstration of Saldana’s extraordinary physicality, which is a large part of the personality she brings to her character. Handling both the physical and emotional scenes with panache, Saldana is the very reason the movie works. Of course, Besson and Megaton are well aware of this, which is why the other actors seem to get short shrift. But like we said, this is not a movie you fault for these flaws- rather, all it seeks to do is to quell that adrenaline fix in action fans, and in that regard, it does so beautifully. Yes, we mean that literally.

(Sexy and exciting, this is one hot action thriller that boasts a fantastic action star in Zoe Saldana) 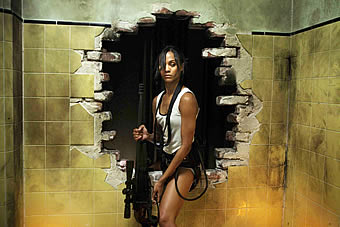 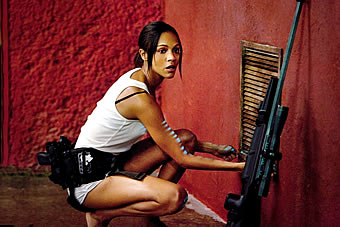 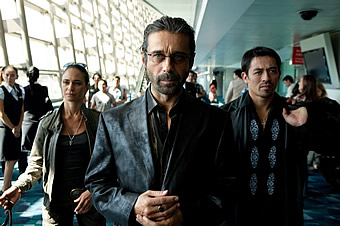 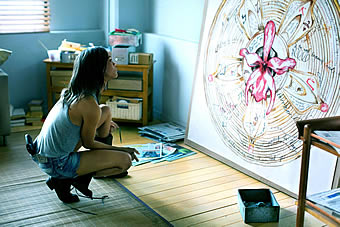 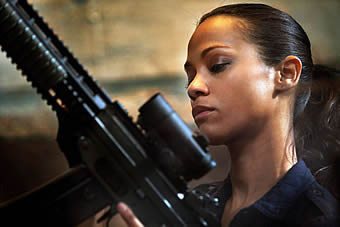