Synopsis: Trapped in the underground train tunnel system, a single mother’s resolve to protect her son is tested to the extreme as both of them are the few remaining survivors of an attack by a monster. Meanwhile in the control room, duty engineers fight desperately to rescue the trapped survivors.

Here in Singapore, most of us take public transport for granted. Just think about our principal mode of railway transportation, the Mass Rapid Transit (we locals conveniently refer to it as MRT) system which spans the length and breadth of the island. Almost every location resided by the masses is serviced by a MRT station. Want to head to town? The MRT train will take you there easily. Lazy to walk from one end of town to the other? Just hop on to a MRT train and you’ll be there in a jiffy.

Now, what if we were informed that a monster lurks underground within the complicated network of tunnels? This would be a different ball game – local authorities would be very concerned. And maybe that’s why we don’t see the familiar MRT trains and stations featured in this movie. Instead, we understand that the production took place on trains, as well as in train stations depots operated by Malaysia’s Rapid KL.

Billed as Singapore’s first monster movie, the story is straightforward. A group of unknowing passengers board the last train and unfortunately get trapped in the underground train tunnel system. Among them are a single mother (Jesseca Liu) and her withdrawn son (Nathaniel Ng) who are recovering from a recent family tragedy. There’s also a teenager (Janice Seow) who seems to know a lot about train operations. When the train stops in the middle of nowhere underground, a monster appears and sends everyone into panic mode.

Meanwhile, there is chaos back in the control station too. Right after chief railway engineer (Peter Yu) lamented why maintenance hasn’t been done properly (another probable reason why Singapore’s MRT branding can’t be used), station manager (Andie Chen) and his team are informed of the train mishap. After some commotion, a rescue team is sent underground, with the chief railway engineer getting personally involved due to personal reasons.

Director JD Chua’s debut feature was supposed to be released in 2020 after four years of planning and production. No thanks to the pandemic, the title delayed its release. The result is a movie that features decent visual effects and production values. As long as you set your expectations right and understand that this is not a Hollywoodblockbuster, you’d be impressed by the design of the monster. Probably due to the limited budget, much of the story takes place within a confined area with not much varied action taking place.

Story wise, Liu delivers a commendable performance as an overwrought mother. Other characters are competently played by the ensemble cast, but their storylines do not add much to the main plot. For a 79 minute movie, it does feel more could have been done to beef up the screenplay. The origins of the monster are not explained, and why the monster chose that particular spot in the tunnel to call home could have been an intriguing side plot. While the comparison between the single mother and the monster’s love for their child at the end of the movie is notably interesting, viewers may already have too many questions in their mind to be moved.

(While more could have been done to beef up the story, Singapore's first monster movie is a decent effort) 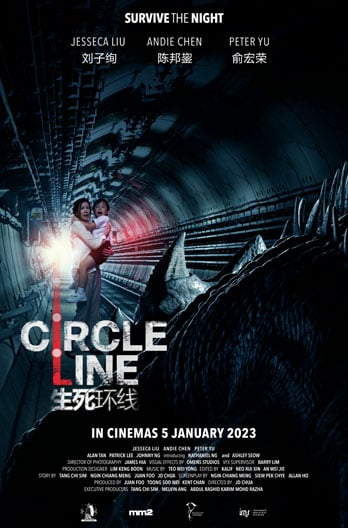