Synopsis: Jon Baker (Shepard) and Frank “Ponch” Poncherello (Peña) have just joined the California Highway Patrol (CHP) in Los Angeles, but for very different reasons. Baker is a beaten-up pro motorbiker trying to put his life and marriage back together. Poncherello is a cocky undercover Federal agent investigating a multi-million-dollar heist that may be an inside job—inside the CHP. The inexperienced rookie and hardened pro are teamed together, but clash more than click, so kickstarting a partnership is easier said than done. But with Baker’s bike skills combined with Ponch’s street savvy, it might just work... if they don’t drive each other crazy along the way.

If shows such as Starsky & Hutch and The Streets of San Francisco sounds alien to you, then there is a high chance you won’t know Chips either. Chips was a successful TV series about two highway patrol officers that aired from 1977 to 1983. Comedian Dax Shepard (Parenthood, Hit & Run) basically took the title and rewrote it as a modern-day buddy cop comedy for the big screen. Surprisingly given its run-of-the-mill theme, Shepard’s first major studio directorial piece actually works!

Shepard plays Jon Baker, a has-been motocross champion who is trying to get his life together and hopefully winning back his trophy wife (played by the real-life Mrs Shepard, Kristen Bell) by joining the California Highway Patrol (CHP). Ponch (Michael Pena) on the other hand is a hotshot undercover FBI agent who is assigned by his boss to infiltrate the CHP when a recent heist involving an armored van is suspected to be an inside job. When a hotshot agent is paired up with a rookie, sparks are bound to fly and with any buddy cop comedy goes, this pair of mismatched buddy is going to break the ice and save the day.

Liked his last movie, Hit & Run, Chips relies a lot on jokes about sexism and homopobia. The story on the whole is wafer-thin but who cares when Shepard is able to keep things interesting especially the terrific chemistry he has with co-star Michael Pena. Check out the scene where Ponch has to carry his naked, half-paralyzed buddy (Baker suffers from severe rheumatism when it rains) to the bathroom. It’s hilarious. It’s fortunate that Shepard’s writing is way tighter this time round, it makes the gags funnier and the tone goofier. Just don’t go in expecting anything smarter than a thesis.

Instead of relying on unnecessary gross gags and explicit nudity unless you count two naked breast shots as offensive, Pena’s Ponch is painted as a sex addict who constantly has to go to the bathroom to pleasure himself plus the fact that he can’t control himself when he sees women in tight spandex. This is a recurring funny gag that works perfectly fine despite the lack of anything visual. His partner on the other hand is a lousy shooter and suffers anything from food smell to cat but he knows the make of a motorbike just from the sound of it. The relationship between these two is so genuinely crafted that by the time the credits roll, you really root for this pair of fumbling cops.

Nowadays, anyone in Hollywood that needs a bad guy just need to call Vincent D’Onofrio (Daredevil, Jurassic World) or Michael Shannon. In Chips, it’s the former. The prolific movie and television actor portrays Lieutenant Vic Brown, the evil mastermind behind the heists. Not much is known about this character with the exception that he has a drug-addicted son played by Justin Chatwin, the young man from Wars of the World. Brown also workout in the gym in his spare time, he is tough and he wants to retire to some remote island with all the dirty money. He looks like an interesting menacing character though the fast pacing doesn’t allow him to do more.

Shepard continues to bring his love for anything on wheels to the big screen. This time he is not paying tribute to muscle cars; he is piling his love on Ducati motorbikes. With actual on-location shoot along the highway and roads of busy Los Angeles, the numerous grounded chase sequences actually deliver some crazy fun. Even if you walk out feeling vexed with Shepard’s silly comedy, you still need to seriously credit Shepard for not employing nonsensical quick cuts and green screen effects.

This reboot or remake or whatever you want to call it is way better than the trailer. The entire premise might be inconsequential and mainly an excuse to fill in before the next slapstick humour and nifty chase lands. Yet this is Shepard’s best enjoyable effort to date.

(Just chip in and have fun!) 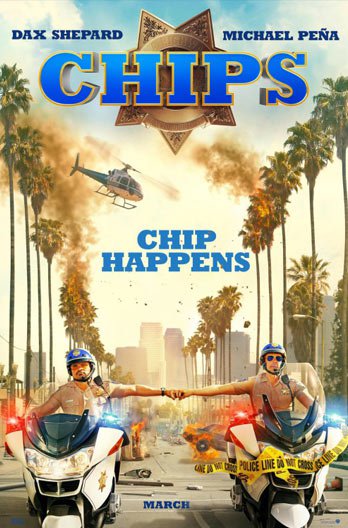