Synopsis: On the run in the year 1987, Bumblebee finds refuge in a junkyard in a small Californian beach town. Charlie (Hailee Steinfeld), on the cusp of turning 18 and trying to find her place in the world, discovers Bumblebee, battle-scarred and broken. When Charlie revives him, she quickly learns this is no ordinary, yellow VW bug.

The ‘Transformers’ franchise had all but run aground with the fifth and most incoherent entry last year, so ‘Bumblebee’ is really an inevitable step for its studio if it didn’t want yet to lay that cinematic universe to rest. Though Michael Bay remains involved, he is only here as producer, having handed the reins of this spinoff to ‘Kubo and the Two Strings’ director Travis Knight. Despite this being his first live-action feature and sophomore filmmaking effort, Knight proves an inspired choice to helm this intimate, character-driven movie, as he deftly balances the requisite blockbuster action spectacle with a keen eye on the emotional arcs of its central characters. It hardly is as action-packed as Bay’s quintet, but there is wit, warmth and a lot of heart in this love story between a teenage girl and her alien robot.

Oh yes, you read that right – ‘Bumblebee’ offers a significant change-up from the previous films, centering on a female protagonist instead of the usual male suspects. That individual is adorable tomboy Charlie Watson (Hailee Steinfeld), a music fan and auto enthusiast who is about to turn 18 but is still very much hung up over the loss of her dad. Charlie is not yet ready to accept that her mom Sally (Pamela Adlon) has a new boyfriend Ron (Stephen Schneider), and resents them as well as her younger brother Otis (Jason Drucker) for having moved on. By chance, Charlie comes across a dilapidated yellow 1967 Volkswagen Beetle in the junkyard where she hangs out to find spare parts to remodel the classic 1959 Corvette which her dad treasured. Needless to say, Charlie will discover in no time that the VW Bug is in fact a young soldier by the name B-127, which had been tasked by his leader Optimus Prime (once again voiced by Peter Cullen) to establish a base for his fellow Autobots on Earth.

As penned by Christina Hodson, the relationship between Charlie and Bumblebee becomes a semi-Spielbergian tale of intergalactic friendship. One by choice and the other by circumstance, both find themselves having no other companion, and the bond that ensues between them is somewhat akin to that of a master and pet. There is low-key charm and laughs to be had in their scenes, including one by the beach where she teaches him how to conceal himself, another in her garage where he shows his distaste for certain 80s music that she introduces him to, and another at the front porch of a snooty female schoolmate’s house whom he helps her take sweet revenge on using toilet paper and eggs. You can probably guess that the movie is setting itself up for some point later on when both of them will be forcibly separated, but given how genuinely earnest it is done, you’ll likely still fall for it.

That focus on character- and relationship-building does mean the middle act is more deliberately paced, which will test the patience of younger viewers as well as those looking for the sort of non-stop adrenaline thrills of the earlier films. Yet we suspect many will not mind a much more poignant story, which at its essence is about two characters finding their purpose and voice next to each other. In the case of Bumblebee, that is pretty much literal, but is a surprisingly neat explanation to why he ends up communicating via the song lyrics on radio channels; but in the case of Charlie, it is about rediscovering her reason for living following the emotional hole that her father’s death had left, and in that regard, there is a nice call-back to her earlier days as a champion high diver right at the end of the film.

Lest there be any doubt, it does end on a high – meaning, thrilling – note, with Bumblebee confronting two vicious Decepticons at a shipyard where a transmission tower will determine the fate of humanity. Befitting this origin story, the finale is all on Bumblebee (and not say Optimus Prime), and in place of scale, there is a lot more emphasis here on slick one-to-one robot-a-robot judo-like action. The details here matter, and even amidst the heat and noise of battle, you’ll still be able to take in fully the way these robots transform, folding and twisting from one shape to another. It is a welcome change from the frenzy of Bay-hem, where we could often hardly make out who is fighting with whom, let alone how all that metal is clanging together.

Much care too has been paid to the period details – tab cola, rotary phones, rabbit-ear television sets, VHS tapes, the primitive Pong video game, and of course the pop culture references. Whether it is ‘The Breakfast Club’ (watch for how Bumblebee responds after watching the iconic scene of Judd Nelson walking across the football field and punching the air) or the soundtrack of classic 80s bangers like Rick Astley, the Smiths and LL Cool J, Knight clearly has a fond affection for the era. That same nostalgia in fact extends to the material itself, from the choice of Bumblebee as a humble VW bug (before his Camaro days) to the inclusion of such fan favourites like Soundwave and attack dog Ravage. Oh yes, the film’s sensibility is firmly rooted in the 80s, which melds an old-school action-adventure with the young romance of classic John Hughes through the inclusion of Jorge Lendeborg Jr.’s boy-next-door.

Importantly, you shouldn’t go into ‘Bumblebee’ expecting the bombast of the earlier films – and we suspect for many, the change in pace, tone and setting will indeed be both refreshing and appreciated. Like we said, there is a lot more emphasis here on character- and relationship-building, which pays off in several heart-tugging moments in the third act. It may not have the same frenetic exhilaration of the Bay movies, but there is thrill in being able to see the transformation of the robots themselves, whether in or out of battle. For once in the franchise, there is truly humour and heart in the story, the former too from the addition of John Cena as a hard-nosed, brick-jawed military man who comes to learn the difference between an Autobot and a Decepticon. With ‘Bumblebee’, we dare say the ‘Transformers’ franchise roars back to life with a terrific reboot, and we hope that sets the course for the (inevitable) next few films to follow.

(Eschewing the earlier films' tendency for wanton indiscriminate mayhem, this character-driven, more intimate spinoff packs wit, warmth and a lot of heart into a story of finding your purpose and voice) 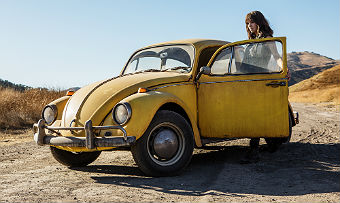