Synopsis: A unique romantic drama about mistaken identity and the possibility of second chances. When a young, hard-bitten attorney (starring Gwei Lun-Mei) finds herself in the afterlife following a terrible car accident, she is mistaken for another woman and sent back to earth for one week to make reparations. She is horrified by her new life as a housewife with a strange husband and two children. However, she gradually begins to care for her new family. Unfortunately, the week will eventually come to an end. Will she be forced to leave the life she has come to love?

What would it feel like to be someone else? While it is something this reviewer asks himself every other day (yes, there is always someone else’s life you envy), it is a movie concept that is as old as time. This idea transcends all genres – from romantic comedies to sci fi dramas, and it is the basis for the best fiction storytelling. Be it Big (1988) where a 12 year old boy barters his body with his 30 year old self, Face/ Off (1997) where a FBI agent and a crazy terrorist exchange identities (this John Woo flick is a classic when it comes to body swapping), or The Hot Chick (2002) where a popular girl switches her body with a petty criminal, there are limitless possibilities as logic is thrown out of the window.

The latest movie with this premise to hit our shores is Ho Wi Ding’s work about a single, successful female lawyer who finds herself in an alternate reality after getting involved in a serious accident. In this life, she is forced to take on responsibilities of a full time mother and wife. There is a demanding architect husband and two difficult children to deal with. Is this supposed to impart her with some life lessons which she overlooked while she was thriving before the accident?

Like most body swap movies, this one is filled with comedic elements and heartwarming moments. After laughing at the jokes, you are supposed to have some deep philosophical revelations about what life is really about, and let go of the trivialities that do not matter in the grander scheme of things. The story development is predictable: a young and hard bitten female is initially shocked by how she has to live the life of a housewife (a great opportunity to mess the actress’s hair and wardrobe up in the most glam manner), but gradually finds out what true happiness is when she spends more time with her new family. Alas, there is a time limit to this magic (thanks for the originality, scriptwriters) and does our protagonist have to leave the life she has come to embrace?

Ho first impressed us with his debut feature film Pinoy Sunday (2009), an innovative and original piece of work where we saw a pair of Filipino migrant workers embark on an adventure of determination and self discovery with an abandoned couch. The Taiwanbased filmmaker who was born and raised in Malaysianext made an impression with local audiences with Our Sister Mambo (2015), a project by Cathay Organisation to mark its 80th anniversary.

His latest film stars big names like Gwei Lun Mei (Black Coal, Thin Ice) and Chen Kun (Mojin: The Lost Legend), together with familiar faces like Wang Jingchun (The Golden Era) and Ouyang Nana (Mission Milano). The cast members do their best to make the story work, but there seems to be too much lightheartedness and merriment to drive the message across. Of course, one can argue that such movies shouldn’t be too heavy handed. The result then, is one that doesn’t stand out from other similar works out there that aim to deliver a wholesome message about treasuring what you have, and making time for the people who matter.

If you really needed a movie to remind you, then you’re in serious trouble.

(The predictable movie features pleasant people and decent performances, but does nothing more to drive the message across) 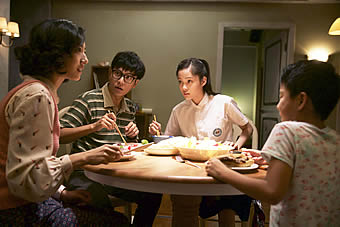