Synopsis:  In 1942, Henan province was devastated by one of the most tragic famines in modern Chinese history, resulting in the deaths of three million men, women and children. Although the primary cause of the disaster was a severe drought, it was exacerbated by locusts, windstorms, earthquakes, epidemic disease and the corruption of the ruling Kuomintang government. At night, hundreds of famished farmers descend with sickles and torches on the household of Landlord Fan (Zhang Guoli) in North Henan province. He holds the final stocks of grain in Laozhuang Village. Terrified of the angry mob, Fan prepares a banquet for them in his own courtyard home. But old feuds break out and his property is burnt to the ground in an accidental fire. Meanwhile, war is about to break out between Japanese troops and Nationalist forces in North Henan. The province's full supply of grain is to be diverted to the Chinese troops. Realizing the danger, provincial chairman Li Peiji (Li Xuejian) pays a visit to Generalissimo Chiang Kai-shek (Chen Daoming) in the temporary capital of Chongqing, but when he is face-to-face, he doesn't have the courage to speak up. Homeless and hungry, Landlord Fan is forced to join the millions of refugees who are walking on foot to Shaanxi province, where they have traditionally sought refuge in times of crisis. Fan is among the most fortunate, with his own horse-drawn cart to carry his 16-year-old daughter Xingxing (Fiona Wang), loyal servant Shuanzhu (Zhang Mo), tenant Huazhi (Xu Fan) and the remains of their grain supply. On the perilous journey south, marching in the opposite direction to the Chinese army, Fan encounters four men, each facing a crisis: impassioned American journalist Theodore H. White (Adrian Brody), chef-turned-judge Old Ma (Fan Wei), the pragmatic priest Thomas Megan (Tim Robbins) and the Reverend Simeone (Zhang Hanyu), whose own religious faith is being put to the test. As the weeks pass, the social difference between Fan and his farmhand Shuanzhu steadily evaporates. They dream of a future after the war, ruling as landlords together. Fan does the unimaginable and sells his own daughter to a brothel for a few quarts of millet. She insists, desperate for the chance of real meal. Shuanzhu, who has long cherished Xingxing, is brokenhearted. Shuanzhu finds consolation when the older Huazhi offers to marry him. After one night with her new husband - having secured a new father to care of her starving children - she sells herself to two slave traders. Her new family have enough food to survive the perilous crossing of the border into Shaanxi province. Alone and with nobody left to live for, Fan returns north again to die in his hometown. Theodore H. White publishes his scathing report that reveals the extent of the famine in Time magazine, embarrassing Chiang Kai-shek (Chen Daoming) and the Nationalist government. The Generalissimo orders the Chinese troops to retreat, leaving the amassed Japanese army in complete confusion. Then the Japanese troops make a completely unexpected move... they begin feeding the famished population.

Which is worse, famine or war? The two are not mutually exclusive of course, but when a great famine strikes the province of Henan in China just when the Japanese are about to invade, the resource-starved Chinese government has to choose between the devil and the deep blue sea. Should they support the multitudes of soldiers risking their lives to protect the motherland, or destitute civilians unable to feed themselves? All are Chinese but there is only enough for one group.

This ethical dilemma forms the crux of Back to 1942—an adaptation of a novel by Liu Zhenyun, a Henan native who also wrote the screenplay for the film. For director Feng Xiaogang, it is clear that his sympathies lie with the ordinary civilians, who become helpless collateral as they are caught in the throes of the double disaster. From the opening voice-over sequence, to scenes of staged parades, the burden of nationalism and its costs are made vivid and problematized in the nature of this dual catastrophe.

To add to the fray, petty conflicts and provincial disputes within the larger pandemonium get in the way of relief distribution. Diplomatic bottlenecks and lip service would ultimately lead to the death of 3 million Henan people. Meanwhile, Japanese troops exploit the famine as a way to turn the Chinese against their own. Governor Li (played by Li Xuejian), the provincial representative of Henan makes a half-hearted attempt to plead with Chiang Kai-shek (Chen Daoming)for aid, and at one point, contemplates saving himself. It is all too tempting to frame a character like Li in the stereotypical mould of sycophantic, grovelling and spineless official. Thankfully, Feng and Liu exercises restraint in the portrayal of this character and there are moments in the film that capture Li’s inner struggles, as he becomes a figure to both pity and hate.

With all these in mind, it is not hard to see how Back to 1942 is a nuanced effort for a film of such epic scale and Feng is able to weave in tender moments and subtle humour among scenes which depict the atrocities of war.

The cinematography is at times spectacular, especially because Feng makes use of the Chinese landscape very well. This, combined with a moving soundtrack, is especially evocative in a scene where Shuanzhu (Zhang Mo)and Huazhi (Xu Fan)exchange their tattered pants in a field. However, there are moments where the night scenes are inadequately illuminated, and dare I say, disappointingly blur at others. So there are spaces for improvement, even for a competent storyteller like Feng.

At the 2 hour mark (the film is 146 minutes long), I was also starting to wonder if the director was taking his time with plot developments and started to look for scenes that could be axed with sharper editing. But each was special, and the director has a technique that is strangely immersive and patient, leading the viewer to take apart each and every scene as a pivotal point in history. In anaction-packed, blockbuster era, a director’s keen sensibility to observe discipline in pacing and achieve it successfully—both aesthetically and functionally—cannot be appreciated enough.

Indeed, for all the multiple plot developments and twists in the tale, Back to 1942 is not a difficult film to follow. It is riveting and full of political suspense and tension, yet thoroughly Chinese. It’s always tricky when involving westerners in films about Chinese history, and one does not have to look too far back, to Zhang Yimou’s The Flowers of War (2011), to see why this is so. While hauntingly and beautifully shot, Zhang’s film had many critics cringing from the need to illustrate a period in Chinese history from a Westerner’s perspective. We’re not talking Flags of Our Fathers (2006)-Letters from Iwo Jima (2006)-type productive cross-cultural understanding here, but where casting and scripting insidiously panders to Hollywood tastes and marketing ploys.

Although Hollywood heavyweights Tim Robbins and Adrien Brody appear in the film, as a Catholic priest and an inquisitive reporter for Time magazine respectively, Feng is careful not to portray the Westerners as the ones with the greater moral imperative, choosing instead to make a distinctively Chinese film that focuses on the stories of his people and their spirit.

I get the feeling that with the choice of projects like Aftershock (2010), Feng is, of late, driven by a social obligation to document history in his films, almost as if he is duty-bound to do so. If he is, he does so with the support of a very strong cast and script in Back to 1942, and the searing image of a flag-bearing orphan girl stoically tearing on cue in one scene and the subdued and resonating ending of the film alone attest to these qualities. Not a bad feat for a film that took almost two decades to be made.

(You don’t have to be a history buff to appreciate this film, because Feng condenses a messy period in Chinese history into a thoroughly absorbable and often fine film, but like approaching any war film, be prepared for the violence and tragedy that unfold onscreen) 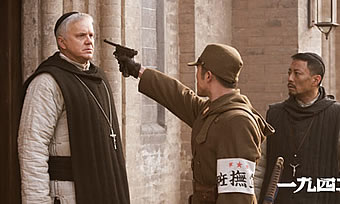 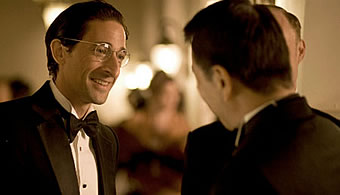 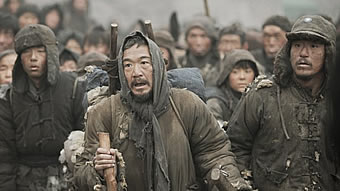