Synopsis: 100 years ago, titans suddenly appeared on Earth. Soon, human civilization veered on collapse due to the titans. Humans then built a giant wall to defend themselves. Within the giant walls, humans lived in peace, but, 100 years later, the giant wall is broken. Mankind is under the terror of titans, a beast in which feast on human flesh. Eren Yeager, a young boy determined to make change when he himself could transform into one. He is humanity’s last hope. As the story progresses, the truth behind the origin of the Titans arises and the story shifts to one about political subterfuge.

It is probably best to treat the Attack on Titan live-action movie as a standalone piece rather than as an adaptation of the highly successful and popular Attack on Titan manga/anime series. With the mangaka (manga author)’s blessing to do whatever they want with the movie, the movie production team has taken liberty with the source material and completely re-imagined Attack on Titan as a kaiju (a genre of Japanese special effects monster movies that usually involves monsters attacking each other or a city) movie.

To their credit, they have created a pretty entertaining and gripping movie that stands on its own. Once you get past the unnecessarily long-winded and somewhat meaningless expository opening scene (aka the part before you see the first Titan) of the movie, it becomes one roller coaster ride full of heart-lurching moments.  What makes the Titans eerie is their resemblance to human beings except these giant humanoids only display barely contained crazed expressions of delight when going after puny humans and gobbling them up. Rather than an action or sci-fi movie, Attack on Titan would fit better as a horror movie.

The special effects team did a fantastic job in creating Titans that stir up a sense of unease and fear in the audience. It is a pity that the director Shinji Higuchi marred what would have been a spectacular horror movie with illogical context and character behaviour.

While fans of the anime/manga may cringe at how the post-apocalyptic world of Attack on Titan now consists only of Japan and the two main male characters, Eren and Armin, now look totally Japanese, I was puzzled by why these two characters still had non-Japanese names while the main character with a Japanese first name, Mikasa, is instead played by an actress who is obviously of mixed ethnicity and doesn’t look all that Japanese. Just aspuzzling how Eren, who could only helplessly watch the love of his life get eaten by a Titan as he was paralysed by fear, could suddenly gain superhuman determination and courage to hoist himself into the mouth of a Titan and take Armin’s place as Titan snack although Eren was badly injured and missing a leg. Perhaps brotherly love triumphs all other kind of love… The director also takes the incompetency of the Survey Corps squad, that Eren and Armin are attached to, to new heights. Despite being told about the Titans’ sensitivity to noise and that they should be quiet if they encounter one, most of the time, they scream or shout when they see one, thereby attracting the Titans. The insertion of a sexual scene just before the pesky Titans attack the squad also does not seem to add much to the plot.

Unfortunately, these inconsistencies and generally weird developments make it difficult for the viewer to feel attached to the characters and any heartache when they get eaten by Titans. As a viewer, I did feel shivers down my spine when the Titans attacked and went on an eating/killing spree but that horror stemmed from the knowledge of the foreseeable grotesque acts of seeing a fellow human being die a gruesome and painful death and not because I knew a beloved character may be meeting his doom.

The only two characters that had somewhat even treatment were Armin and the newly created Sannagi. Armin is consistently kind and saintly, making him kind of plain vanilla. Still, you find yourself rooting for him because out of the entire motley crew, he is one of the most innocent and clearly doesn’t deserve to die. Sannagi, in his limited screen time, displays love for his siblings and great determination to do his best for his teammates which makes you want to root for him.

While entertaining as a horror-kaiju movie of sorts, Attack on Titan would be able to fulfil its potential as a classic kaiju movie if the production team could sort out and rectify all these inconsistencies in the second part of the movie. Perhaps that’s what the director has in mind for I find myself wanting to want the second part just to see if Attack on Titan lives up to its potential.

(As a standalone piece, Attack on Titan (Part 1) makes for an entertaining horror movie masquerading as a sci-fi/action movie; however, if you are a fan of the original anime/manga series, do go in with very lowered expectations of how faithful the movie is to the series to save yourself some grief) 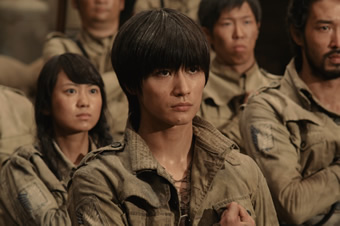 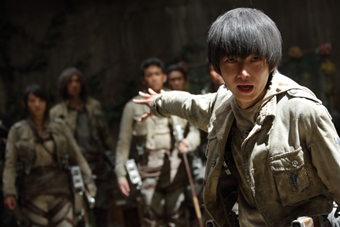