Synopsis: A household name in Hong Kong, queen of Canto pop, Anita Mui was the very definition of a cultural icon during Hong Kong’s golden age in the eighties and nineties. With a career that began at the age of 4 in an amusement park, Mui dedicated almost her whole life to music. Behind stardom, her personal life, passion at work and the love for friends made her an irreplaceable role model of "The Daughter of Hong Kong". The film opens with her final concert and looks back on her life and legacy.

‘Anita’ begins at the end, with the star, dressed in a stunning wedding gown, about to step on stage for the last time. Those who have had the privilege of experience what it was like when the late Cantopop icon dominated the Hong Kong entertainment scene would know that it was barely two months before she would succumb at a tender age of 40 to cervical cancer, triggering waves of sorrow among her fans all over the world, including in Singapore.

It would never have been easy to squeeze her entire life into a feature film, but over an engaging two-and-a-quarter hours, director Longman Leung and his co-writer Jack Ng do so with admirable nostalgia, restraint and poignancy. Indeed, it bears saying from the onset that Leung does not take her fans’ sentiments for granted; instead, he offers a dignified, vivid and sometimes piercing look at the much-revered singer, actress and philanthropist dubbed ‘Madonna of the East’ and ‘Daughter of Hong Kong’, aided by a spectacular lead performance by newcomer model Louise Wong.

In terms of narrative, the story covers the following moments in her life: first, as a six-year-old performing with her 10-year-old sister Ann in late-night bars, on the streets and then in the Lai Chi Kok Amusement Park, calling themselves ‘Yee-yee and Yee-na’; then, getting her big break after winning the inaugural ‘New Talent’ singing awards in 1982, while attracting the attention of top record producer Mr So (Gordon Lam) and stylist Eddie Lau (Louis Koo); and last but not least, her meteoric rise enjoying hit single after hit single before breaking out into acting with renowned Golden Harvest producer Leonard Ho (Waise Lee) as her godfather.

Amidst these discrete episodes in her life, the film also portrays her relationship with a number of key figures – Ann (Fish Liew), who graciously steps aside for Anita to enter the talent contest as a solo artist, a decision which will eventually spell the end of her singing career and her settling down into married life; her invaluable friendships with Eddie and Leslie Cheung (Terrance Lau), the latter of whom had starred with her in Stanley Kwan’s ‘Rouge’ which she won a Golden Horse Best Actress award for; and her doomed romance with fictional Japanese pop idol ‘Yuki Godo’ (Ayumu Nakajima), based upon that with 1980s J-pop idol Masahiko Kondo.

Much thought has gone into assembling the archival footage showcasing key highlights of Anita’s life, though both the selection and the plotting have been equally careful to avoid the more controversial stories in her life, including her political activism in the aftermath of the Tiananmen Square event crackdown and the legal tussle with her mother and other siblings who wanted a share of her profits and estate. It is understandable why the filmmakers have avoided these subjects, but equally those expecting a less sugar-coated account of Anita’s life will inevitably be disappointed.

Yet these omissions ultimately do not diminish what is a mesmerising biopic that counts as one of the best of the genre from Hong Kong cinema in recent years. Thanks to superb work by production designer Pater Wong, the re-construction of old-school Hong Kong looks absolutely breath-taking, with careful attention paid to the skyline, the neon lights and such venues as the LCK Amusement Park and Lee Theatre; just as stellar is the detailed re-creation of Anita’s stage outfits by costume designer Dora Ng, blending real and reel to brilliant effect.

Certainly, no amount of dressing can make up for an authentic performance, or the lack thereof; and in this regard, it is extremely fortuitous that the filmmakers had identified Wong for the role. Not only does she resemble Anita, she carries the role with suitable aplomb, dancing and singing with the sort of fearlessness and raw emotion which came to define her both onstage and off stage. Whilst she does not convey the same intensity of brazen insouciance which Anita came to embody, Wong does her darnest best with the role (and that is kudos to the late Liu Kai-chi, who was her acting coach on the set).

Frankly, we were skeptical when we heard that Leung, who is best known for co-directing the ‘Cold War’ movies, was chosen to helm this; yet, the filmmaker makes an impressive solo directorial debut here, channelling expectation and nostalgia into a lively yet elegiac portrait of the superstar. Without saying the obvious, ‘Anita’ is also a love letter to a very different era in Hong Kong’s history, and while the neon signboards may still be around, there is no doubt that Hong Kong has changed irrevocably in political, social and cultural terms. That, symbolic in the passing of Anita, makes the film even more profoundly moving and a must-see for those fortunate enough to live through such defining times.

(Told with restraint, nostalgia and poignancy, this biopic of the late superstar is a mesmerising recount of a once-in-a-lifetime icon and of a Hong Kong that has since changed irrevocably) 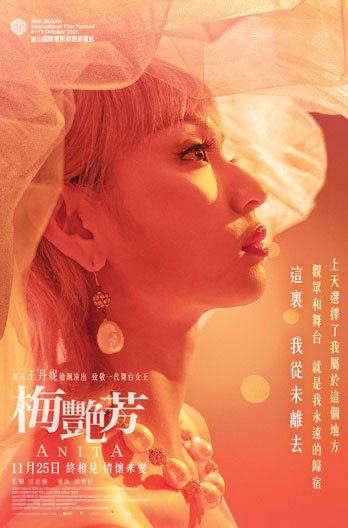