Synopsis: When the Grande Hotel is suspected of being the source of a new outbreak of the coronavirus, the Epidemic Prevention Centre immediately orders for it to be completely sealed off. All of the guests staying in the hotel are forced to undergo 14 days of mandatory quarantine. Isolated from the outside world, the people begin to forge bonds as they reminisce over the normal lives that they have lost.

Similar in fashion to what The Banquet (1991) did to raise funds for a flood relief and Twin Dragons (1992) to benefit the HK Film Directors’ Guild, as a gesture of goodwill to support the HK film industry, ten HK film companies and countless crew members decide to come together to produce All U Need Is Love where all proceeds will go on to benefit the film industry crew members whose income were badly affected by the pandemic. While the intention is certainly noble and charitable, that can’t be said about the overall quality of the final product.

Vincent Kok is roped in to write and helm this comedy set in the beginning of the coronavirus outbreak. Three coronavirus infected suspects played by Alex Fong, Gordon Lam and Francis Ng are revealed to have stayed at The Grande Hotel (read: 隔离酒店 in Chinese) after a brief interrogation by an pandemic task force officer, Louis Koo. Thus, those visitors that are currently staying or just happened to be at the hotel for other kind of businesses are forced to quarantine for 14 days by the pandemic task force.

To say that Kok’s scripting from start to end is bland and witless is an understatement. And watching him recycling tropes from his past duds liked Hotel Deluxe and Love Is Pyjamas makes it even harder to digest. The briefly interconnected stories resemble failed SNL skits than a proper movie liked Julian Cheung and Louis Cheung crooning Baby Shark. Ultimate cringing. Although we must admit their segment together for the most part is pretty entertaining with the bromance factor at an all-time high. Veterans Eric Tsang and Tony Leung Ka-fai (the other Tony is probably busy fighting Shang-Chi in the MCU) stars as two horny uncles looking for a quick fling. Decent effort to spice up the atmosphere but never deliver anything remotely raunchy or funny.

Carlos Chan pairing with Fiona Sit forms the kind of enemies-turned lovers’ storyline that is very much awkward and unbelievable while Michael Hui and Chin Kar-lok teams up for a series of unsuccessful and inconsequential escapes via parachuting, diving their way out of an aquarium and crawling out of a ventilation duct. So that leaves the story of Billy Luk and Cecilia So which sadly is yet another dull tired affair.

As if to fill up the movie to a more desirable runtime of 90 minutes, Kok includes a pointless prolonged chase in the opening involving Alex Fong. Talkshow host/comedian Bob Lam appears later on by pulling some “Initial D” drifting and Jackie Chan kicking Ken Lo’s ass for no other reason other than being the movie’s biggest glorified cameo. Once again, Kok demonstrates his inability to come up with a decent entertaining script.

Having written half of Raymond Wong’s inept Lunar New Year productions, Kok continues to embarrass himself further with a title liked All U Need Is Love. The constant reminder on the importance of face masks and sanitizers feel like an extended advert from Ministry of Health. Additionally, the concluding message of spending precious time with your loved ones sound so dated in a contemporary comedy. It's so bad even his regular collaborators Sandra Ng, Teresa Mo and Ronald Cheng are conspicuously missing in this outing.

On hindsight, the film companies might as well spend the money on an action comedy directed by Chin Ka-lok. At least the box-office will be more desirable than this hot mess. The lack of a humorous script and a glaring lack of an A-list HK female actress is also a worrying trend. Indeed, instead of showcasing the hardwork contributed by the talents involved, it’s more of a display of the sorry stage of the ailing HK film industry.

(5 stars for the effort and intention, the rest is better left unsaid) 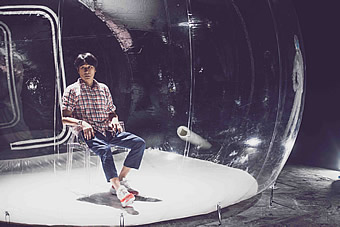