Synopsis: Inspired by true events, Malasaña 32 tells the story of the Olmedos, a family that, in 1976, settles in the neighborhood of Malasaña, in Madrid. Manolo and Candela arrive excited at the apartment they have just bought. They move in with their three children and Grandpa. With their old village left behind, they start a new life in the capital of a country in a transitional period. The family will try to adapt quickly to this new life in the city, but it won’t be easy. They will soon realize nothing about this house is normal; there is something in the house, something supernatural, unknown, that is threatening to finish them off. Amparo, the middle child, suspects that the apparitions and psychic phenomena might be linked to a terrible event that the previous owner experienced. The Olmedos are not alone and their worst nightmare is about to begin.

The titular address denotes an apartment building where the Olmedo family have purchased a unit that had been abandoned for the past couple of years. Despite being offered at a low price, the family have needed to take a mortgage in order to afford it, which was to be a new start from their rural livelihoods as well as respite from the oppressive fascism of Francisco Franco.

Alas, as the opening scene demonstrates, there is something wrong about that particular unit, although what exactly remains elusive till almost the very end. The 17-year-old Amparo (Begona Vargas) is the first to realise things are amiss – while helping her younger brother Rafael (Iván Renedo) change into his clothes after his bath the very night they move in, she gets locked out of his bedroom and bursts in to find him sitting on the ledge of the window.

To make matters worse, her senile grandfather Fermin (Jose Luis de Madariaga) starts behaving erratically; and after leaving Rafael in the apartment the next day to retrieve Fermin, the boy disappears into the walls of the house. Her father Manolo (Iván Marcos) and mother Candela (Bea Segura) are naturally distraught, but owing to the mortgage, have no choice but to report to work as usual. That leaves Amparo with her teenage brother Pepe (Sergio Castellanos) to find Rafael, whom as they quickly discover, has been kidnapped by the spirits haunting their residence.

Rescuing Rafael is only part of the problem; for reasons which we shall not divulge here, the family soon learn that it isn’t Rafael that the ghosts are really after. Getting to that revelation is an exercise in white-knuckle suspense, as director Albert Pinto demonstrates a firm grasp of mystery and tension in keeping his audience tense and intrigued at the same time. To Pinto’s credit, the storytelling never loses its momentum throughout a well-paced 104-minutes, and there are red herrings aplenty as we try to decipher what exactly is the evil confronting the Olmedos.

There are also a fair number of ‘jump scares’, so those who do not appreciate being jolted in their seats deliberately by things that jump out at you will probably find themselves irritated from time to time. Even so, there’s no quibbling with Vargas’s performance, as she channels keenly both fear and courage confronting the hauntings in the apartment; in fact, we dare say it is because of her as the audience surrogate that we are emotionally invested in the proceedings.

’32 Malasana Street’ may not possess the originality to be a horror classic, but those looking for a genre fix will find this Spanish title a perfectly fine entry. Pinto is familiar with all the usual tricks in the playbook, but equally executes them with sufficient flair and confidence to turn this into an effective haunted house movie. At the very least, it offers a creepy setting, good atmosphere and some choice terrifying moments; so even though it may be formulaic, it still is worth a visit.

(An effective horror that boasts a creepy setting, strong unsettling atmopshere and some choice terrifying moments to satisfy anyone who needs a genre fix) 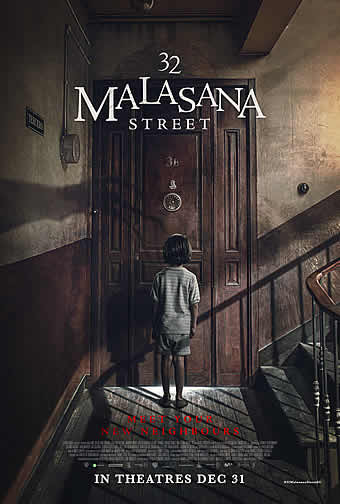