Synopsis: A young woman wakes up after a terrible accident to find that she's locked in a cellar with a doomsday prepper, who insists that he saved her life and that the world outside is uninhabitable following an apocalyptic catastrophe. Uncertain what to believe, the woman soon determines that she must escape at any cost.

We never liked ‘Cloverfield’. As well-acclaimed as that little 2008 monster movie was, we hated its nausea-inducing found footage aesthetic, not to mention its annoying repetitiveness of people shouting ‘Oh, my God!’ over and over again and running away from something we never quite see until the very end. It is therefore not with anticipation, but with a sure measure of dread, that we learn of ’10 Cloverfield Lane’, a film that was not conceived as bearing any relation to ‘Cloverfield’ – that is, until its producer J.J. Abrams seized upon an opportunity to turn into a spiritual successor to its now-titular predecessor. Yet it is also precisely because first-time director Dan Trachtenberg’s film is not like that gimmicky excuse of a film that it proves much, much more compelling, whether as a standalone movie or as one that shares the earlier film’s post-apocalyptic world overrun by aliens.

Consider that as fair warning to those who are expecting the monster mayhem of the original film; only in the third act do we get a glimpse of them creatures which had last overran Manhattan. Oh yes, ’10 Cloverfield Lane’ unfolds pretty much entirely within the confines of an underground bunker, where a trio of uneasy dwellers are trying to hide out from an unspecified above-ground chemical attack that has apparently decimated the world. John Goodman’s survivalist Howard is the patriarch of this little family, which also consists of his handyman neighbour Emmett (John Gallagher Jr.) and Michelle (Mary Elizabeth Winstead), a young woman running from a bad romance who awakens from a car crash to find herself handcuffed to a pipe in the subterranean lair.

That Michelle would doubt Howard’s claim that he is keeping her inside for her own good given how the attack has made the air outside toxic and uninhabitable is inevitable, and the script by relative newbies Josh Campbell and Matthew Stuecken (with an assist from Whiplash’s Damien Chazelle) plays deftly with her suspicions with regard to Howard’s intentions. Without spoiling any of the delightfully unexpected turns that the story takes, let us just say that Howard is and is not a saviour at the same time, a contradiction which Trachtenberg unspools to surprisingly claustrophobic and suspenseful effect within the shelter’s tight quarters. It is a taut and tense three-character chamber piece all right, anchored by a trio of top-notch performances.

Goodman isn’t quite someone you’d readily associate with a film like this, but the veteran actor switches effortlessly between an uptight controlling persona with barely suppressed rage and a more likeable, even hospitable, veneer that makes for a chillingly disconcerting watch. Just when you think you’ve got him figured out, Goodman hints at something more, and that ambiguity works beautifully for a character whose motives is supposed to keep us guessing. On the other hand, Winstead avoids the cliché of the tanktop-wearing heroine in distress (despite being in one most of the time) by a calculated and measured turn as the frightened yet resourceful heroine who relies on her own smarts and quick-thinking to make good on her determination not to be a passive victim.

Tonally, the change-up from a trim Hitchcockian thriller to a conventional sci-fi movie in the last act feels jarring to say the least, but Winstead carries the role with total commitment, and it is in rooting for her character’s survival that we remain emotionally invested. Those looking for some answers to the questions posed – but never really resolved – in the 2008 movie will likely be disappointed, because like its so-called ‘blood relative’, ’10 Cloverfield Lane’ similarly leaves you guessing just where these monsters are from and what they want from Earth. So even though it does open up franchise opportunities for one of the most profitable films from Abrams’ Bad Robot stable, it isn’t quite so clear that the creative decision to link the two movies was in fact an inspired one.

In fact, it is pretty obvious that this genre mashup is a much, much better film when it plays as its own gripping psychodrama than when it tries to grow the connective and thematic tissue with the earlier found-footage monster mash. Though an early shot of Winstead waking up in a windowless basement chained to the wall does make one wonder if it will go the way of ‘Saw’, there is no intention of replicating the same exploitative thrills; rather, it builds mystery teasing its audience to guess whether Howard is a psychopath holding Michelle captive towards his own degenerate ends or a saviour who has rescued her from Armageddon. Let’s just say the fun is in being knocked off balance more than once at what you think you know, and even if its conclusion does its smarter and wittier build-up no favours, this is one mystery box well worth your time unravelling.

(Better as a three-character psychodrama chamber piece than as a ‘spiritual successor’ to the 2008 found-footage monster mash, ’10 Cloverfield Lane’ is – when at its best – a taut and tense Hitchcockian thriller) 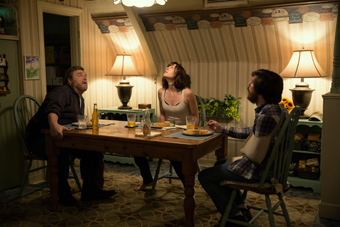