Synopsis: In the 1970s, Korea is under the absolute control of the President Park (LEE Sung-min) who controls the KCIA, the organization with an edge over any branch of government. The director of KCIA, KIM Gyu-pyeong (LEE Byung-hun), is the seemingly most prospective second-in-command. In the midst of reign of fear, a former KCIA director, PARK Yong-gak (KWAK Do-won) who knows all about the government’s obscure operations, exiles to the U.S. where the investigation of ‘Koreagate’ is underway. As the tension escalates, the stifling political maneuvering by the all second-in-command’s unfolds.

If you’re familiar with ROK history, you’d know about the extraordinary turn of events in 1979 which saw its President assassinated by the director of the Korean Central Intelligence Agency (KCIA) inside a safehouse within the Blue House compound. That, as well as the preceding days, is the basis of writer-director Woo Min-ho’s political drama.

As its title suggests, the point-of-view which Woo has adopted for his storytelling is none other than that of the KCIA director Kim Kyu-pyeong (Lee Byung Hun). Rewinding 40 days before the day of the killing, Woo depicts how Kim grew increasingly disillusioned with President Park’s autocratic reign, not least because of the influence of the latter’s brash security head Gwak Sang-cheon (Lee Hee-joon).

Certainly, President Park was already a dictator way before that, which is why Kim’s immediate predecessor Park Yong-gak (Kwak Do-won) decided to fly to the United States to give testimony before Congress about his former boss’ corrupt ways. Park’s plans to publish a memoir further incenses President Park, and Kim is initially dispatched to try to rein in Park.

Woo’s choice of Kim as his leading character is intended on one hand for his movie to be a character study of the person whose actions eventually ended President Park’s regime, and on the other as our surrogate to frown upon the increasingly repressive behaviour of the latter – these include ordering the assassination of the former KCIA chief, and sanctioning a military crackdown on the civil uprising in Busan and Masan. Through Kim’s eyes, we see the insidious influence of President Park’s security chief Gwak, as well as how democracy became more and more a farce under Park.

It is a fascinating watch all right, not least because President Park has been both revered and reviled since, but also because there are present-day lessons to be drawn from having a leader in power for too long. As with his previous films, including 2015’s ‘Inside Men’, Woo demonstrates a superb control of tone and pacing throughout the movie, building a series of events meticulously leading up to that fateful night where Kim decided that extreme action was needed to save his country from its leader.

The performances are uniformly excellent, led by none other than a mesmerising turn from Lee (Byung-hoon) whose portrayal of a conflicted senior official is never less than compelling. His fellow Lee (Sung-min) is also just as persuasive as the ruthless dictator who refuses to let go his grip on the country, and so too is the other Lee (Hee-joon) who twists and manipulates his way into the President’s good graces. Kwak may seem like he is comic fodder, but he conveys surprising gravitas in the later scenes revealing why he had decided to leave his country.

Even though it bears a qualifier at the start that it may not be 100% accurate, there is plenty of authenticity in ‘The Man Standing Next’, which also benefits from location shooting in Washington and Paris. Indeed, Woo has crafted a fascinating slow-burn political drama on a pivotal moment in ROK politics, and one that boasts probably one of Lee’s finest performances to date. As long as you’re willing to give it your time, we can guarantee this is worth your while.

(Boasting one of the finest performances of Lee Byung-hun's career, this slow-burn political drama is a gripping tale of absolute power and its perils) 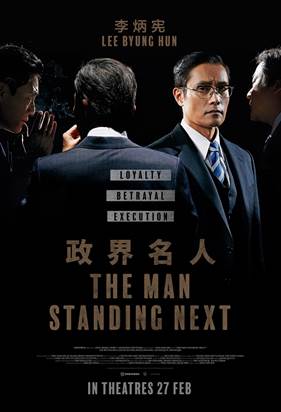