Synopsis: From the creators of Despicable Me and the imagination of Dr. Seuss comes the 3D-CG feature Dr. Seuss’ The Lorax, an adaptation of the classic tale of a forest creature who shares the enduring power of hope. The animated adventure follows the journey of a 12-year-old as he searches for the one thing that will enable him to win the affection of the girl of his dreams. To find it he must discover the story of the Lorax, the grumpy yet charming creature who fights to protect his world.

If Dr. Seuss were alive, he would have been 108th on March 2nd, and this colourful adaptation of his 1971 illustrated children’s book that’s been timed to be released on this date in the United States is just the befitting tribute to him. Not only is it joyous hilarity for the whole family, but it preserves the cautionary message at the heart of its source, combining the artistry of modern-day animation with the weird and wonderful elements of what was apparently Dr. Seuss’ favourite book for a delightful and unexpectedly thoughtful experience.

And that is really no small feat, as fans of the author can attest- Hollywood has had a hit-and-miss record with the Seuss, bungling terribly in recent years with Mike Myers’ ‘The Cat in the Hat’, before redeeming itself with the 2008 animated ‘Horton Hears A Who’. It’s no coincidence therefore that the writers of ‘Horton’- Ken Daurio and Cinco Paul- are once again the creative scripting force behind this adaptation, and once again the duo demonstrate their sharp Seussian sensibilities in what is possibly the author’s most controversial work.

Indeed, the story of a reclusive hermit known as the Once-Ler (voiced here by Ed Helms) who recounts his encounter with a strange orange creature known as the Lorax that had huge yellow eyebrows and a moustache like Yosemite Sam was also a pro-conservation and anti-consumerist fable that courted its fair share of detractors when it was first published and still does so today. Of course, these are also different times today, when concerns about climate change and the environment have crept into both the social and political sphere in countries worldwide- and if anything, this is as good a launchpad as any to get the little ones to think about an issue that will impact them sooner or later.

To expand the short story to feature-length, there is now a backstory to the 12-year-old boy who visits the Once-Ler- named Ted (Zac Efron) as a nice nod to the Dr. Seuss (whose real name was Theodor Grissel), this jolly teenager has but one purpose, to get a living tree and win the affection of his sweet high-school age neighbour Audrey (Taylor Swift). Both Ted and Audrey live in the totally artificial town of Thneedville, where everything including the trees is made of plastic and the people are oblivious to the gray desolate wasteland outside of their cocooned city.

With some handy advice from a surprisingly sprightly Grammy Norma (voiced by Betty White), Ted sees firsthand the grim polluted world outside of Thneedville on his way to visit the Once-Ler. Once there, the Once-Ler recounts his folly as a young and ambitious entrepreneur who stumbled upon the beautiful Truffula Valley abounding with candy-coloured lollipop-style Truffula trees, Humming-Fish and cub-like Barbaloots. It’s as far from the Truffula Ted’s seen as can be, and director Chris Renaud pulls out all the stops to make sure that it is a gorgeous eye-popping visual feast.

The first tree Ted falls summons the Lorax, a guardian of nature who tells Ted that he speaks for the trees and implores him to spare a thought for the forest creatures whose livelihood depends on them. “Everyone here needs the trees, and you’re choppin’ em down,” he says, and for a while, Ted appears to pay heed to the Lorax. But when his knitted garment he calls the thneed becomes an unforeseen sensation in town, greed takes over and it isn’t long before the entire valley is decimated.

It is a cautionary eco-fable all right, one that is perhaps even more relevant in this consumerist age where luxuries are seen as essentials- and there is a clever metaphor here in how something so sought after like the thneed can be so quickly and easily forgotten. There is also added relevance in what happens after, as another entrepreneurial mind quickly takes over by supplying bottled fresh air to the people of Thneedville and becoming the town’s unofficial mayor in the process- even as his factories continue to add to the pollution. Opportunity presents itself in calamity, but how we make use of it is yet something else altogether- that is the lesson Daurio and Paul make as they set up O’Hare (Rob Riggle) and his two bulky bodyguards as the nemeses Ted has to defeat in a thrilling action-packed finish.

The additions will no doubt entertain the kids, but older audiences familiar with the books will be glad to know that the Seussian spirit is well and alive in this zany rollicking adventure. Reverential too is the visual cues that the movie takes from Seuss- both in terms of the curvy undulating lines and shapes as well as the bright colours- and like “Horton”, you’ll know when you see it that you’re in his world. There is also a nice tip of the hat to another Seuss character when the Once-Ler in his old age finally reveals himself to Ted- we won’t spoil the surprise here; suffice to say that you’ll recognise it as soon as you see him.

Deserving of mention as well is the excellent voice cast assembled for the film. Efron conveys youthful naivety as much as Swift, while Helms gives the Once-Ler its necessary idiosyncrasies as well as an unexpected depth lamenting the folly of his past. But the true firecracker here is DeVito, returning after some years of being sidelined in Hollywood to tip-top form as the Lorax. There is verve and edge in every line of DeVito’s delivery, crackling and popping as much as the colours do in every frame.

Less lively- despite Paul and composer John Powell’s best efforts- are the rock musical numbers that pepper the film. While it’s clear they were going for tongue-in-cheek wit, the lyrics and the music just don’t gel very well with the overall tone of the film; except for the rousing number ‘Let It Grow’ at the end. Nonetheless, there is plenty for the kids to embrace, especially the minion-like creatures of the forest courtesy most likely of Renaud- we dare you to resist falling in love with the three aptly named Humming-Fish and the Barbaloots, especially the one with the hair on his chest shaved off.

The stereoscopic treatment here is also a treat for younger audiences (and even more so in IMAX where we caught this), lending the Seussian-scapes a lush vibrant feel and the action sequences an added dimension of excitement. But of course this is nary just harmless diversion for the kids, and the true weight of this animation is its environmental message of conservation told in a simple- but not simplistic- manner to be understood by audiences of all ages. It is an adaptation Dr. Seuss would very likely be proud of if he were still around, in no small measure because it echoes Seuss’ essential plea summarised right at the end: “Unless someone like you cares a whole awful lot, nothing's going to get better. It's not.” 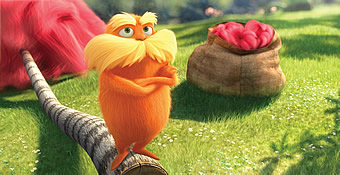 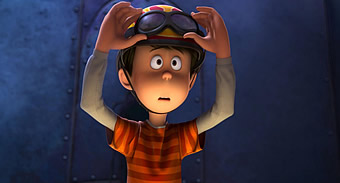 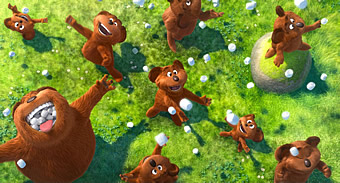 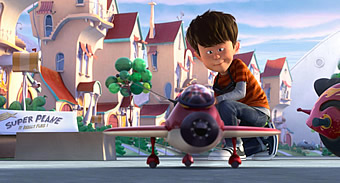 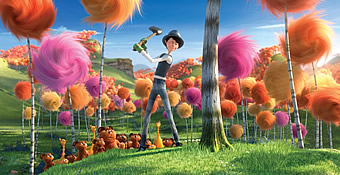 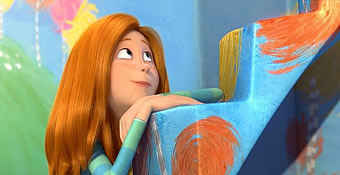