Synopsis: From the creators of DESPICABLE ME comes HOP, the comic tale of Fred (James Marsden), an out-of-work slacker who accidentally injures the Easter Bunny (voiced by Russell Brand) and must take him in as he recovers. As Fred struggles with the world's worst houseguest, both will learn what it takes to finally grow up.

The Easter Bunny is to Easter what Santa Claus is to Christmas. Legend has it that both the Easter Bunny and Santa Claus go around people’s houses at night before their respective days bringing gifts- though in the case of the Easter Bunny, these tend to be more specific to coloured eggs, candy and chocolates. Despite their similarities, Hollywood seems to favour Santa Claus over the Easter Bunny, going by the number of Yuletide-themed films around the plump, jolly, white-bearded man in a red suit and the dearth of films about the latter.

Cinco Paul and Ken Daurio however attempt to change that with their part-live action, part-animated romp “Hop”, a through and through family film centred around the Easter Bunny. Also the writers of last summer’s surprising hit for Chris Meledandri’s Illumination Entertainment’s “Despicable Me”, Paul and Daurio display much less of their ingenuity this time round. Indeed, their adaptation of the Easter Bunny legend borrows too heavily from Yuletide films like “Elf”, “Fred Claus” and in particular “The Santa Clause” that it almost feels that they have merely switched elves for chicks, reindeers also for chicks and Santa for the Easter Bunny.

The references are apparent right from the start, when we are first introduced to the Easter factory where all the candy and chocolates for the kids are prepared. Production designer Richard Holland’s vision of this is no more than “Charlie and the Chocolate Factory” crossed with Santa’s workshop in any of the films mentioned above, and despite the riot of colours, there’s little wildly inventive that will make you go ‘wow’. Same goes for the Easter Bunny’s mode of transportation, which is really an egg-shaped sleigh pulled by hundreds of tiny chicks; or the source of its magical powers, derived from the Egg of Destiny or the equivalent of a Santa suit.

Paul and Daurio’s reliance on these Yuletide film tropes extends as well to the plot of the movie, which essentially is the story of the heir-apparent to the Easter Bunny throne, E. B. (voiced by Russell Brand, who also makes a live-action cameo later on) absconding his responsibilities to pursue his dreams of musical superstardom much to the chagrin of his father (Hugh Laurie). You can probably guess the narrative pretty much from here on end- just add in another out-of-work slacker, Fred (James Marsden), who is in the same real-life situation as E.B. with his father (Gary Cole).

Besides sorting out their own father-son issues, E.B. and Fred will also spend time bickering with each other, before bonding through a fictional David Hasselhoff (playing himself) reality show “Hoff Knows Talent” (an all-too obvious riff on “America’s Got Talent”) and a sing-along at a school play where both take turns singing ‘I Want Candy’. There’s also a subplot which sees E.B’s father’s number two, a duplicitous Spanish chick Carlos (voiced by Hank Azaria), insinuating that he be crowned the next Easter Bunny in E.B’s absence- but this is played for little more than to allow for an frenetic action-packed finale at the end.

Though originality isn’t one of its strong suits, director Tim Hill’s (Alvin and the Chipmunks) film does take- pardon the pun- more than a few hops in the right direction. Most prominently, Hill’s experience with such part-animation, part-live action fare is amply demonstrated in the seamless blend of E.B. and the rest of the computer-generated animals with their human counterparts- special mention goes to E.B, whose features and expressions are beautifully and vividly animated. Impressive too is Illumination Entertainment’s ability to create ‘oh-so-adorable’ sidekick characters, the chicks including Carlos and the over-enthusiastic prone-to-dancing Phil reminiscent of the little yellow minions from “Despicable Me” and equally irresistible.

Hill has also assembled a lively voice cast led by the vivacious Russell Brand. Though there is none of the raunchiness usually associated with him (think “Get Him to the Greek”), Brand’s distinctive laid-back charm is still intact and fits his character perfectly. Just as outstanding is Hank Azaria’s voicing of both Carlos and Phil. Though the two characters couldn’t be more different in nature, Azaria finds a unique voice for each, and is especially good at delivering Carlos’ punchlines with aplomb- who can forget Carlos’ line ‘It's called a coup d'état which is a French for coup d'état!’

And thanks to Brand and Azaria’s voice talents, as well as the excellent blend of live-action and animation, “Hop” still proves to be more than agreeable family entertainment- even if laugh-out-loud moments are fewer and further-in-between than one would expect. Not to mention of course that the familiarity with Yuletide films of Santa Claus is unmistakable, which also makes “Hop” just as undemanding, if not unexceptional, fare as most of these movies. Still, it’s colourful, it’s buoyant, and it’s cute, so that’s definitely enough to keep the kids entertained.

(Cute bunny + cute chicks – if that’s good enough for you, then hop, don’t walk, to see this) 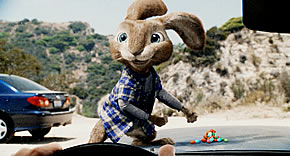 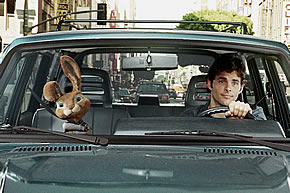 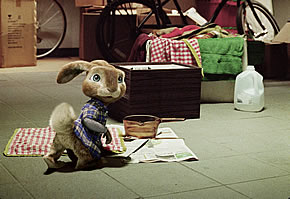 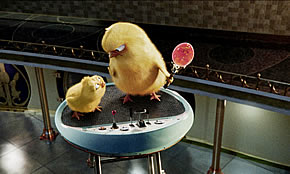