Liam Neeson stars as Dr. Martin Harris, who awakens after a car accident in Berlin to discover that his wife (January Jones) suddenly doesn’t recognize him and another man (Aidan Quinn) has assumed his identity.  Ignored by disbelieving authorities and hunted by mysterious assassins, he finds himself alone, tired, and on the run.  Aided by an unlikely ally (Diane Kruger), Martin plunges headlong into a deadly mystery that will force him to question his sanity, his identity, and just how far he’s willing to go to uncover the truth.

At the age of 58, Liam Neeson is enjoying one of the unlikeliest renaissances in Hollywood as an action star. Who would have thought that the award-nominated actor of “Schindler’s List”, “Kinsey” and “Michael Collins” could kick ass the way he did in the 2008 revenge thriller “Taken”? Well, maybe only producer Luc Besson and director Pierre Morel of “Taken”- but the point is they did a heck of a mighty job convincing critics and audiences alike.

Which is a good thing really- for without Neeson, it’s hard to imagine another actor who could play the titular character, the university professor and botanist Dr Martin Harris, and summon the same kind of empathy to make this thriller work as effectively as it does. Indeed, it’s hardly an overstatement to say that Neeson is the very lynchpin of this Jaume Collet-Serra movie, adapted from the French novel by Didier Van Cauwelaert. You see, “Unknown” requires an actor who can make his audience believe and care in his character’s predicament, and Neeson does a terrific job at that.

Right from the start, he makes Harris entirely relatable, an ordinary man like any one of us trapped in an impossible situation. That situation is somewhat of an identity crisis- arriving in Berlin for a biotech conference, Harris reaches his hotel only to discover that he has left his briefcase at the airport, jumps on a cab that ends in a river, and wakes up four days later to discover that his identity has been taken from him. Thanks to Neeson, Harris’ desperation and anxiety is utterly palpable for his audience and immediately hooks us in.

Collet-Serra is keenly aware that he needs his audience to identify with Harris, so he deliberately keeps Neeson’s character as down to earth as possible- without becoming bland. While some may expect Neeson to go into fisticuffs-mode a la “Taken”, there’s in fact very little of that until the end. Instead, Collet-Serra casts Harris as the intellectual his character is supposed to be and lets him concentrate on solving the puzzle of his missing identity, drawing his audience deeper and deeper into the web of mystery.

Yes, though its premise may suggest that Harris may be no more than a more mature version of Jason Bourne, Collet-Serra avoids that comparison by casting the film as a Hitchcockian thriller more than a straight-out action film. Not to say that there isn’t any action- there is, and that includes a brilliantly shot, exceptionally thrilling showdown between a cab and a S.U.V.- but “Unknown” is much more sparing with these sequences than “Taken” was.

In turn, Collet-Serra has crafted a tense and suspenseful thriller. Together with cinematographer Flavio Labiano, he makes good use of the wintry Berlin landscape- chilly, gray and sunless- to add to the foreboding menace. As he had proven with the underrated “Orphan”, Collet-Serra knows how important buildup is- and he exercises the same dexterity throughout this film to keep his audience on the edge of their seats.

It is well and good too that his screenwriters Oliver Butcher and Stephen Cornwell know how to keep their cards close, revealing enough to tantalise you but never too much to give away the twists and turns in the story. Butcher and Cornwell also lend the movie some nice wry humour, including a hilarious scene where Harris and his doppelganger both try to convince a genius biochemist (German actor Sebastian Koch from “The Lives of Others”) who they both claim to be.

The movie also gets a significant boost from a surprisingly strong pedigree of supporting actors, probably attributable to Neeson’s participation. Aidan Quinn is sufficiently menacing as Harris’ doppelganger, while Diane Kruger is just as effective as the Bosnian illegal immigrant and cab driver who ends up helping Harris. But the real stand-outs are Bruno Ganz as the methodical ex-Stasi agent turned private detective Harris hires to get to the bottom of his case, and Frank Langella as Harris’ close friend and fellow university professor. Ganz and Langella share a brief scene together, and boy does that crackle with old-school espionage-thriller tension.

But of course, the reason why “Unknown” is such a successful thriller is Liam Neeson. With “Taken” and now this film, Neeson epitomises the thinking man’s action hero in his mix of brawn and intellect, with a soulful vulnerability that underpins his uncanny ability to make his characters in their angst and despair perfectly relatable to his audience. Thanks to Collet-Serra’s confident hand, “Unknown” also proves to be more than just a “Taken” wannabe- in fact, it is surprisingly well-plotted, even more so than “Taken”, and possesses razor-sharp suspense. Clever and exciting, with a hero you will easily root for, “Unknown” is a sure-fire thriller that will get your adrenaline pumping from start to finish. 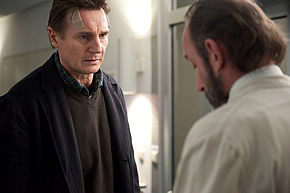 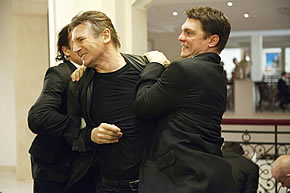