Synopsis: Yi (Lee Sinje) is an ordinary woman living a mundane life. Over the years, she has been bothered by a repeated dream, in that dream she stands alone on wasteland with a doubt of the mystery being buried underneath. One day, Yi meets a handsome young man, Eric (Li Zong Han), when he comes to Yi’s garment alteration shop to hire a service. The two lonesomes are quickly drawn together, particularly after Yi shares with Eric about the tortures from those strange dreams. On the other side, Sergeant Au (Huo Si Yan) desperately purses a kidnap-murder case, she never pushed any harder as it is her nephew the missing hostage in this case. Ransom has been paid, but the kid’s whereabouts is still a mystery. Tortured by extreme anxiety, Sgt. Au’s sister Peggy (Charlie Young) turns hysterical, she radically accuses her young sister of her incapability of tracking down the culprit. Their relationship turns bad but Sgt Au sympathizes with her sister and she vows to bring the kidnapper to justice by herself. Eric’s effort still falls short to comfort Yi, the details of Yi’s nightmares are getting more and more sophisticated. Sometimes she finds her bedside is stained with mud in the morning. She can’t help thinking that she would really walk on that wasteland and kill someone there while sleepwalking… Sgt. Au crosses path with Yi when she visits Yi to investigate missing case of Yi’s ex-husband, Ming. Yi is in absolute shock, but she quickly jumps to a conclusion that she kills Ming as from the bottom of heart she hates this unfaithful man. During interrogation, Yi tells all the details and confesses that she would murder in her sleep. Following the clues hidden in Yi’s dream, Sgt. Au leads her team to the crime scene, however, the body claimed to be buried underneath is no where to find…

Oxide Pang’s latest thriller ‘Sleepwalker’ is yet another example of what happens when you try to shoehorn the sensibilities of a Hong Kong filmmaker into the rules and restrictions of the China film industry. It’s no secret that the growth of the industry in recent years would not have been possible without foreign import, namely actors and directors from Hong Kong who have been lured by the big bucks offered by burgeoning media companies eager for a slice of the moviemaking business.

And for Oxide, that crossover has also come with a hefty compromise- indeed, because the state film authorities prohibit any film with supernatural elements, Oxide has done his best to deliver a thriller with the kind of horror elements his audiences have come to expect from him, just without any references to ghosts. The result is a movie that, with its jump-scares and sudden jarring music, wants so hard to be the next ‘The Eye’ or even ‘The Detective’, but has to contend with being just a neutered version of these far superior films.

Reuniting with his favourite lead actress and lately his wife, Oxide casts ‘The Eye’s’ Angelica Lee in the role of Yi, a recently divorced woman in her mid-30s who has a sleepwalking problem at night. That and the fact that she keeps having the same recurrent dream at night has left her troubled, especially when she gets the distinct feeling that what seems only a nightmare of her digging up a young girl’s body in a forested area could very well be real. After all, how else can she explain her muddied hands and shoes?

Meanwhile, a parallel story thread sees a nerve-wracked mother Peggy (Charlie Young) visiting the police station daily in hopes of any update on her daughter gone missing three months ago. She accuses the police of incompetence, but the detective in charge happens to be her sister Sgt Au (Huo Si Yan), so you can imagine how that strains their sisterly ties. What does this have to do with Peggy’s missing daughter or Yi’s sleepwalking phenomena? Nothing really, but it’s just one example of how the screenplay by Oxide and Wu Meng Zhang goes off-tangent in too many unnecessary directions.

Anyhow, Yi’s ex-husband goes missing and suspicion falls on Yi, which leads Sgt Au to make her acquaintance. Turns out Yi also had a daughter who went missing a year ago and was subsequently found dead- though she has somehow blocked the traumatic incident out of her conscious memory. Au sees a link, and despite her doubts of Yi’s sleepwalking claims, she engages a renowned hypnotist Eric (Li Zong Han) whose wife was left in a coma for the past two years after a car accident to pick Yi’s brains for directions to the place the body may actually be buried.

Wait- what does Eric’s wife have to do with the killings? Nothing, absolutely nothing, but somehow we are forced to endure yet another unnecessary diversion as Eric at first reluctant to help Sgt Au ventilates his frustration at his wife’s condition and then agrees. These detours do not help the story one bit, sapping away what narrative tension the story had going for it. Ditto for Oxide’s indulgent direction, allowing some scenes- like one where Yi befriends a girl at a playground and then insists that the child is her daughter- to go on for longer than needed.

Slack scriptwriting and directing isn’t the end of the film’s woes- as a wannabe psychological thriller, it isn’t as smart or logical as it thinks it is. The notion that Yi’s dreams are linked to that of the killer’s, which is supposed to explain why the killer knows to move the body after Yi sleepwalks to the place, is too much of a stretch. But that’s nothing compared to the role-switch when Eric suddenly plays detective and deduces, to Sgt Au and her team’s enlightenment, that the killer may go to Yi’s house to silence her. Wow, really, they couldn’t have figured that out for themselves? What really takes the cake is how Yi is eventually cleared of her ex-husband’s disappearance, the explanation so laughable it might have been better to leave it hanging.

It isn’t clear whether Oxide is oblivious to these flaws, but he seems to prefer spending his time figuring out how to engineer the next ‘boo’ at his audience. It works most of the time, but these are cheap scares that grow increasingly annoying with every repetition. And of course, because there aren’t supposed to be any ghosts in the movie, even Yi’s daughter’s appearance has to be explained away by the fact that it is just a dream. Oxide too seems to be running out of ideas, and one scene that sees a seemingly vengeful Yi chopping away at a slab of pork ribs just recalls a similar sequence in ‘The Eye 3D’.

The only saving grace is that Angelica is in the lead role, and no matter the leaps in logic, she remains a consummate performer playing the psychologically troubled Yi with conviction. Pity then that the rest of the film is such a letdown- a half-baked thriller cum wannabe horror that just doesn’t cut it either way. What’s more, maybe because Oxide can’t really be his own filmmaker without the supernatural, he’s also gone sloppy- and nowhere is this more evident than in a chase sequence that sees Kent Cheng giving the rest of cops a good workout that is so obviously filmed with a double. By the time Oxide throws in the obligatory in-your-face 3D sequence that frankly is just out-of-place, ‘Sleepwalker’ has long since become a listless exercise that makes you wish you could sleepwalk out of it.

(Neither smart nor thrilling enough to be a psychological thriller, this dreadful film also sees Oxide Pang trying too hard to recycle his usual bag of horror tricks) 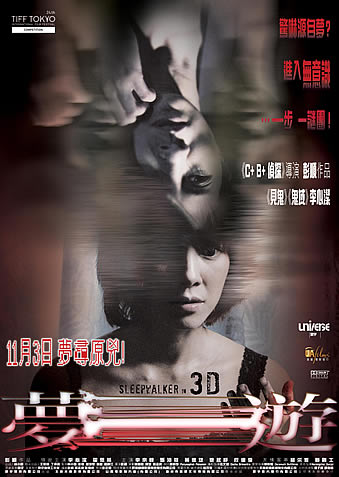 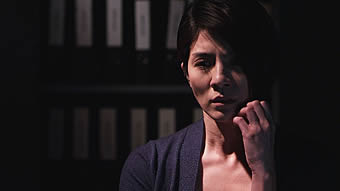