Synopsis: Mysteries keep revolving around TAM's life. Not only does the ex-police officer and now private detective struggle to make sense of the mysterious death of his parents, TAM is entangled in a case which escalates out of control into serial killings since his childhood buddy FUNG showed him some crime scenes photos. Pressure runs high as more people are being dragged into the serial murders - a man is found dead in his home, a female body is dumped in garbage dump and a teenage girl died of uncertain cause. All the clues indicate that the murderer is a psychopathic killer. Can TAM find the real killer and solve the case?

What do we remember of Oxide Pang’s 2007 movie “The Detective”? Well for one, it was one of the very few movies from the Pang Brothers that didn’t suck- thanks to an intriguing buildup, some nice character acting from Aaron Kwok and a gritty but lively setting down in Bangkok, Thailand. It seems reasonable then that Oxide would attempt to make a sequel to the movie, since it does count as one of their most successful efforts outside of “The Eye” series. But alas, despite an equally campy but entertaining performance by Aaron, “The Detective 2” falls way short of its predecessor’s standards.

Aaron once again plays the showy private detective Tam, and like the original, the case before him is a string of murders that has been seemingly committed by the same person. While the first movie brought out a tightly plotted investigation, the mystery here is far less satisfying and perhaps no more than a half-baked attempt at connecting the dots. Indeed, how else would you describe Kwok’s private detective Tam’s rationale for thinking the killings are related just by the fact that the killer was trying to cover his tracks?

Endeavouring to maintain continuity with the first film, Tam is brought in by his old pal Chak (Liu Kai-Chi) who thinks that their successful partnership may once again yield the same analytical insight as in the past. Oxide tries to convince his audience of this, but even with the benefit of hindsight, it’s hard to buy into this when all Tam does is walk around the crime scenes and then just somehow put it all together in his head. Sure, Tam is again using his camera phone to take pictures of the crime scene, and piecing it together with his blackboard scribbles, but the connection Oxide tries to draw is too convenient.

In fact, it seems as if Oxide himself were aware of this- he sets up a parallel story thread involving a young schoolboy who develops an obsession on his older sister and who becomes prone to violent outbursts whenever he sees her with another guy. Right from the beginning, it’s clear that said young boy is somehow connected to the murders, and true enough, the revelation when it comes is too predictable. Equally disappointing is the motivation behind these killings, more abstract than in the first movie, and undoubtedly less convincing.

Oxide has also apparently pandered to the Chinese market, so unlike the original, there isn’t any supernatural twist here which made the mystery the first time round more fascinating. There are hints of Tam’s past as an orphan after both his parents went missing, but that is quickly forgotten for the most part of the movie, and then perplexingly revived at the end to set up the possibility of another sequel. Ditto for Patrick Tam’s supporting role as a chief inspector Chak is made to report to, the supposedly tense relationship between the two fizzling out all too quickly.

As if to compensate for the lacklustre story, Aaron’s tendency to overact seems to have gone into overdrive. While certainly not as bad as the utterly deplorable “Murderer”, there is a distinct sense that Aaron is straining to give his character more depth than the screenplay allows- especially in the climax where Tam comes face to face with the murderer holding Chak hostage. Still, Aaron exudes the same playful charisma he did in the first movie when he isn’t trying too hard to emote, and manages to carry the whole movie with the able help of veterans Kai-Chi and Eddie Cheung (who plays a psychopathic suspect).

Unfortunately for the film too, Oxide goes for a less down and dirty feel compared to the first film, and the result is a movie that loses the visual style which enhanced the original. Couple that with a less than satisfying mystery, and a pared-down performance from lead star Aaron Kwok, and you’ll find that this sequel is yet another disappointing entry in the Pang Brothers’ filmography lacking in the very elements which made the first movie an unexpected success.

(The title here may be “B+” instead of the original’s “C+”, but this sequel with its lazy plotting is more than a grade down from the original) 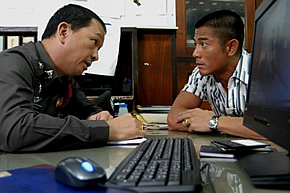 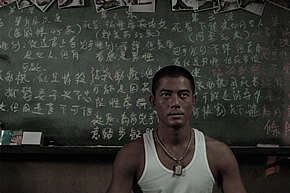