Synopsis: "The Expendables" are back and this time it's personal...Barney Ross (Sylvester Stallone), Lee Christmas (Lee Statham), Yin Yang (Jet Li), Gunnar Jensen (Dolph Lundgren),Toll Road (Randy Couture) and Hale Caesar (Terry Crews) - with newest members Billy the Kid (Liam Hemsworth) and Maggie (Yu Nan) aboard - are reunited when Mr. Church (Bruce Willis) enlists the Expendables to take on a seemingly simple job. The task looks like an easy paycheck for Barney and his band of old-school mercenaries. But when things go wrong and one of their own is viciously killed, the Expendables are compelled to seek revenge in hostile territory where the odds are stacked against them. Hell-bent on payback, the crew cuts a swath of destruction through opposing forces, wreaking havoc and shutting down an unexpected threat in the nick of time - six pounds of weapons-grade plutonium; enough to change the balance of power in the world. But that's nothing compared to the justice they serve against the villainous adversary who savagely murdered their brother. That is done the Expendables way...

“Eat Shit!” shouted Gunner (Dolph Lundgren) to his enemies. What a brilliant way to open an action movie. Compared to its 2010 predecessor, “The Expendables 2” gets a bigger shot of adrenalin, lots of headcounts and a longer list of has-beens, action heroes.

As if to justify your admission ticket, “The Expendables 2” opens with a rumbling 15 minutes of action piece that involves a rescue operation in Nepal carried out by the group of mercenaries led by Barney Ross (Sylvester Stallone). After a sudden head-scratching bow-out by Chinese member, Yin Yang (Jet Li), the group inherited another Chinese member, female by the way, code breaker Maggie Chang (Nan Yu) and together with a young Afghan war sniper, Bill (Liam Hemsworth), the gang head to Bulgaria for another mission. Unfortunately, the supposedly easy mission becomes deadly when a menacing villain, Vilain (Jean-Claude Van Damme) turned up for the purpose of finding a five ton cache of plutonium and without further ado, the rest of the movie is like what Barney says “Track them, find them, kill them”.

The script by Stallone and his team of writers is light on plotting and heavy on the ammo. But of course, this is exactly what “The Expendables” set out to be. There’s however no mention to whatever happened to Mickey Rourke’s character in the original for continuation sake thus for newer audience, there shouldn’t be a problem catching up with the old guys. The sequel gets rid of the irrelevant romance subplot and characterizations in the first and there’s very little downtime as the gang went from one major action set to another.

Two iconic action heroes, Bruce Willis and Arnold Schwarzenegger who has a small cameo previously reunite with Stallone and company for a longer screen appearance although mathematically speaking, less than one-third of the total running time. But the guys had a fun time exchanging their trademark one-liners such as “I’II be back” and “Yippee-ki-yay” that you probably excuse their absence. Not forgetting Chuck Norris who hands in an amusing glorified cameo just to seal his place in the franchise.

The one that nearly stole the limelight is Jean-Claude Van Damme. An exciting choreographed clash of the titans involving Van Damme and Stallone in the finale fight proves the muscle from Brussels is still in top form though honestly the face-off sequence between the two heavyweights can stretch a little longer. The remaining cast members Terry Crews, Randy Couture and Dolph Lundgren isn’t given much memorable stuff to do besides blowing stuff up and doing some humorous wisecracking. Jason Statham on the other hand has an impressive solo knives fight in a church and he gets to spar with Van Damme’s frequent co-star in direct-to-video releases, Scott Adkins who plays Vilain’s right-hand man in the finale as well.

Known for helming “Con-Air” and “Tomb Raider”, Simon West replacing Stallone for this gig knows his way staging the hard-hitting action sequences that range from airplane crash to huge explosions and to ultra-loud shootouts. The higher budget greenlit for this sequel allows for more testosterone-filled, deafening action sequences. This is how the 80’s, 90’s action icons strut their ware and I must say, “The Expendables 2” is a stark improvement on the original recipe. Just bring on Wesley Snipes and Steven Seagal for the third. 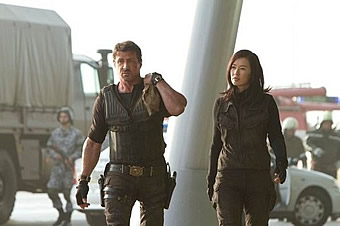 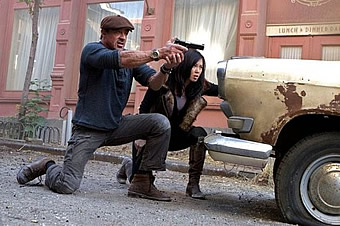 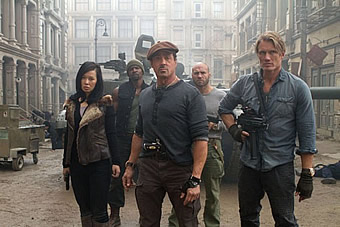 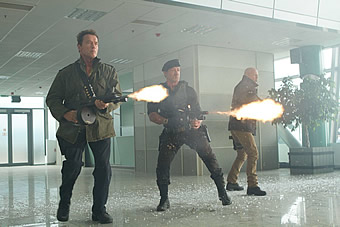 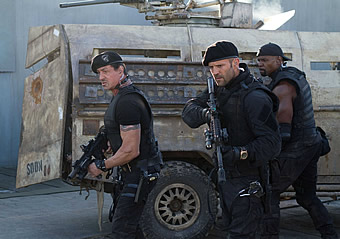