Synopsis: This critically acclaimed film follows a Chinese family who, when they discover their beloved Grandmother has only a short while left to live, decide to keep her in the dark and schedule an impromptu wedding to gather before she passes. Billi (Awkwafina), feeling like a fish out of water in her home country, struggles with the family’s decision to hide the truth from her grandmother.

This is a story that may very well happen to a family in Singapore. Based on Asian American director Lulu Wang’s own life experiences, this is a story that Asians will find familiar, while viewers from the Western regions of the world will find exotic. And that is probably why the film received universal acclaim from critics after being screened in the U.S. Dramatic Competition section at this year’s Sundance Film Festival.

The protagonist is Billi, a New Yorker who is trying to find her place in life. The young woman is a writer who hasn’t been best friends with Lady Luck, and when her parents tell her that her grandmother, who lives in China, has been diagnosed with terminal lung cancer, she decides to follow them back to visit. What’s the catch here? Being Asians, they do not want to break the old lady’s heart. So, they hatch a plan to have Billi’s Japanese cousin to hold his wedding in China. That way, the family can visit without rousing suspicions.

You may have heard how your parents, or your grandparents, expressing their wishes to go visit their hometowns in China. This writer had the opportunity to visit his maternal grandparents’ hometown some years back, and certain scenes in this movie struck a chord with him. While some people think that Chinais a run down and backwards place, especially if you are visiting the old towns, the sights and sounds along the expressways are a sight to behold. And that is aptly captured when Billi (played with pure authenticity by rapper Awkwafina) looks out of the window while on her way to visit her grandmother.

The visuals are not the only things that are relatable in this movie. The themes discussed are what you may have come across. At the dining table, family members talk about why they send their kids for overseas education. They talk about being single and migrating for another country’s citizenship. Amidst the familial antagonism, there is a sense of sweetness to the whole thing. People gather at the cemetery to pay respects to a loved one. People smile and play games at the wedding table. People have heart to heart talks about what they really yearn for in life.

Wang’s screenplay feels close to heart, largely because it is a real reflection on life. First publicly discussed as part of her radio story What You Don't Know, this aspect of family ties asks you to think whether it is alright to tell a white lie so a loved one can be happy for a longer time. If put in Billi’s shoes, would you go against everyone’s inclination to tell the truth to your dying grandmother?

While the story takes place in China, this 101 minute film stands out from Mainland Chinese productions with its stylised shots, quirky soundtrack, and the feel of an indie flick. And that is probably another reason why cinephiles are lapping this up.

The ensemble cast delivers earnest performances. Besides Awkwafina who does a good job of looking like a commoner, she is joined by Tzi Ma and Diana Lin who play her loving parents, and a very likeable Zhao Shuzhen who takes on the role of the darling granny. Other interesting characters include the elder son who never really had a chance to share his feelings with his brother, the Japanese cousin and his wife who look awkwardly out of place, and the grandmother’s sister who has always been at her side to take care of her.

Watching this film is like seeing family events unfold in front of you, and that’s actually a good thing.

(Well-acted and relatable, this family drama is worth every minute of your time) 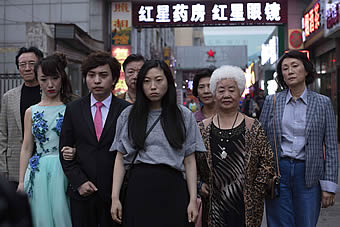 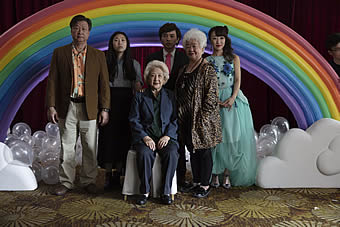