Synopsis:  Consummate con man Roy Courtnay (Ian McKellen) has set his sights on his latest mark: the recently widowed Betty McLeish (Helen Mirren), worth millions. And Roy means to take it all. From their very first meeting, Roy begins plying Betty with his tried and true manipulations, and Betty, who seems quite taken with him, is soon going along for the ride. But this time, what should have been a simple swindle escalates into a cat-and-mouse game with the ultimate stakes—revealing more insidious deceptions that will take them both through a minefield of danger, intrigue and betrayal.

Ah, English actors. It’s almost a sure win when you put two veteran English actors together in a movie. Ian McKellen (80 years old) and Helen Mirren (74 years old) are the leads in this film about a career con artist who attempts to steal the fortune of a rich widow he meets online? You’d definitely want to watch sparks fly.

Based on the novel of the same name by Nicholas Searle, it starts off with Betty (Mirren) meeting a seemingly kind old gentleman Roy (McKellan) through an online dating site. They arrange to meet in real life, and what happens next is a series of carefully thought frauds that involve tragic events that took place during World War II. Yup, this is a heavy handed film that also explores the brutality of history, on top of how people can be the cruelest of beings.

The scam drama is not what you’d expect from a fast paced Hollywoodproduction. Things take their time to happen, as if the English are a classier lot who don’t like to rush through life. Even the shady portions of the movie (McKellan goes to a strip club to meet his sleazy friends) are less brash than what you’d see in mainstream blockbusters. Instead of beer, characters drink wine, champagne and scotch.

If you are in a patient mood, you’d appreciate how the story builds up. Roy and another antagonist run an investment scams using fake Russian investors and a sharing of accounts using keypads connected to a bank. The greedy supporting characters are gotten rid of via devious methods, while the plot continues to advance itself to the finale.

The pace picks itself up when Royfinally gets Betty to agree to transfer their money into a joint account. Suddenly, you find yourself paying attention to details and being interested in what happens next. Will there be a cruel twist of fate? And how are the two characters really connected? Thanks to McKellan and Mirren’s acting, you are engaged till the end of the 110 minute film.

On an emotional level, you will be invested to relate to Betty, as Mirren portrays a strong woman who courageously deals with the mishaps in her life. As for Roy, one can’t wait to see what the sly McKellan has up his sleeves. There is part wisdom (think Gandalf) and part villainy (think Magneto) in this character, and we can’t think of a better actor to personify him.

Directed and produced by Bill Condon, with writing responsibilities going to Jeffrey Hatcher, this drama is a slow boiler. It is always a debate whether novels should be adapted into films, and while this movie has its share of thrilling moments, one wonders whether the story would have more life within the pages of a book. Nonetheless, this is a good chance to watch two legends battle their wits (it is their first appearance together on screen), and be awed by their ability to slip into their roles so effortlessly. 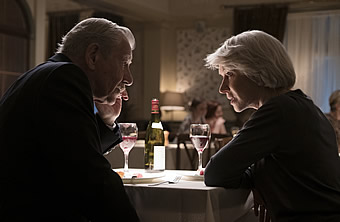 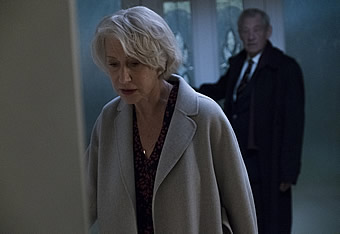