Synopsis: 21 Bridges follows an embattled NYPD detective (Chadwick Boseman), who is thrust into a citywide manhunt for a pair of cop killers after uncovering a massive and unexpected conspiracy. As the night unfolds, lines become blurred on who he is pursuing, and who is in pursuit of him. When the search intensifies, extreme measures are taken to prevent the killers from escaping Manhattan as the authorities close all 21 Bridges to prevent any entry or exit from the iconic island.

Expectation that ’21 Bridges’ would turn out to be a lot more than a standard-issue cop thriller is inevitable, especially since it is produced by no less than the Russo brothers; and yet, it doesn’t take long before you realise that its ambition is no more than that of an old-school crime actioner, so consider that fair warning for those who intend to judge it on its pedigree. That said, those who do not mind such routine will find a sturdy meat-and-potatoes B-movie that receives a significant boost from Chadwick Boseman’s commanding screen presence.

Why Boseman – whose career outside of Marvel’s ‘Black Panther’ consists of such prestigious fare as ‘42’ and ‘Marshall’ – would choose to both star and produce in this movie is not immediately apparent. The story, scripted by Adam Mervis and Matthew Michael Carnahan, is a familiar one of an unerring cop faced with the corruption of some of his fellow blue; at the same time, Boseman’s no-nonsense NYPD detective Andre ‘Dre’ Davis isn’t exactly as compelling as he ought to be, despite what an early scene of him testifying in front of an Internal Affairs panel would have you believe.

Still, we’re grateful that Boseman didn’t shy from the straightforward role; instead, Boseman does the best with what he can of Andre, whom a brief table-setting prologue tells us had lost his father in the line of duty and therefore decided to follow in his father’s footsteps to become a detective. Andre’s track record of discharging his firearm on the job gets him branded “a cop who kills cop-killers”, but it is precisely his presumptive trigger-happiness which leads him to be assigned to the case of a shootout at a Brooklyn restaurant in which eight cops and a civilian were killed.

Interestingly, we get to see from the point-of-view of the two shooters – Ray (Taylor Kitsch) and Michael (Stephan James) – how their robbery of what was supposed to be 30 kilos of cocaine had gone awry. Not only had they found ten times more cocaine than they were expecting in the freezer of the restaurant, Ray and Michael found themselves in the crosshairs of the eight NYPD beat cops who had oddly showed up. It isn’t hard to guess that these cops were dirty, or that their tough-as-nails precinct captain (J.K. Simmons) who wants the preps caught at all costs is also involved.

Oh yes, ’21 Bridges’ won’t win any prizes for originality or twists; what it does pack is a taut manhunt which unfolds over the course of four-odd hours that Andre has to block off all of Manhattan Island bridges and tunnels before the morning rush. In his feature filmmaking debut, veteran TV director Brian Kirk stages the action with lean efficiency, moving from chases to shootouts with plenty of poise and momentum. There are no standout moments, but a series of well-plotted cat-and-mouse sequences with occasional bursts of close-range gun violence.

Like we said at the start, Boseman anchors the film with his sheer charisma, even though it isn’t a role that requires him to stretch his acting chops in any way. Those reading hard into the film to be a topical socio-political thriller may spot some allusions to the #BlackLivesMatter movement, but we’re not quite sure if that’s really reading too much into what are no more than passing references. As a narcotics detective assigned to tag along with Andre, Sienna Miller is unfortunately pretty much forgettable here, though that is as much a reflection of her lack of chemistry with Boseman as it is of how underwritten her character is.

So despite being produced by the Russos and starring Boseman, ’21 Bridges’ is no more than a slick but familiar cop thriller. Its premise of a city on lockdown until dawn is novel, but the execution is entirely by-the-numbers. That isn’t to say it doesn’t offer up its fair share of brisk and propulsive action, and indeed we might add that those who enter with that level of expectation will probably come off perfectly satisfied; as long as you’re in the mood for a throwback crime actioner, you’ll enjoy the film for what it is and what it had intended to be. 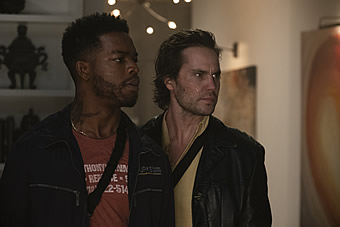 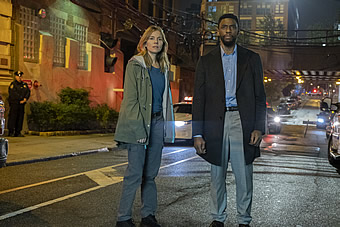