Synopsis: A romantic comedy inspired by a George Michael beat and written by Academy Award® winner Emma Thompson (Sense and Sensibility, Bridget Jones’s Baby ) and playwright Bryony Kimmings, starring Emilia Clarke (HBO’s Game of Thrones) and Henry Golding (A Simple Favor, Crazy Rich Asians). Kate harumphs around London, a bundle of bad decisions accompanied by the jangle of bells on her shoes, another irritating consequence from her job as an elf in a year- round Christmas shop. Tom seems too good to be true when he walks into her life and starts to see through so many of Kate’s barriers. As London transforms into the most wonderful time of the year, nothing should work for these two. But sometimes, you gotta let the snow fall where it may, you gotta listen to your heart...and you gotta have faith.

You might be expecting a holiday love story with ‘Last Christmas’, but this is less a romantic comedy than a coming-of-age story about a klutzy twenty-something year-old British female named Kate.

As played by ‘Game of Thrones’ actress Emilia Clarke, Kate starts out as a screw-up who couch surfs at friends’ apartments and hopes to get lucky at auditions for singing gigs. She is barely holding down her menial job hawking tacky Christmas ornaments at a year-round Covent Garden yuletide gift shop, and has an estranged relationship with her family – not only does she engage in arguments with her older sister Marta (Lydia Leonard) whenever they see each other, she also refuses to return her mother’s (Emma Thompson) calls.

And then one day a curious stranger shows up in front of the shop, staring up at a rare bird on a ledge – which coincidentally poops on Kate after she decides to find out who the stranger is. His name is Tom (Henry Golding), and though she doesn’t take to him initially, he seems to keep showing up around her. There is a good reason for that, and we will get to it later, but suffice to say that Tom comes off less charming than bemusing – he keeps telling Kate to “look up” to see the thing she walks by every day; he loves to twirl around her; he doesn’t carry a cell phone; and oh, he volunteers at a homeless shelter.

Kate’s relationship with Tom gets her to re-engage with the people she cares about, as she goes about making amends for her previously careless attitude towards family and friends. She even goes as far as to volunteer at the shelter, although that is as consequence of Tom ‘ghosting’ her.

Oh yes, there will be good reason why Kate or us cannot quite put our finger with Tom – it isn’t that he is too good to be true, but rather that he is not real enough. If you haven’t heard of it yet, there is a big twist embedded within, which goes right to the heart of Tom and Kate’s connection with each other. To say more will be spoiling it, but we warn you that it will take you – and the film itself – out of its comfort zone.

Thompson, who co-wrote the script with playwright Bryony Kimmons from a story by her and her husband Greg Wise, had quite clearly done so with the George Michael song in mind – and indeed we’re quite sure fans of Michael and Wham! will be delighted hearing their idols’ tunes being played throughout the movie. But whether that makes for a compelling narrative is yet another matter, especially since it results in some clearly awkward or illogical moments in the proceedings preceding the twist.

Yet equally, those who are simply looking for a holiday movie will probably lap up the movie’s feel-good syrup, right up till the big singalong at the very end – and to Thompson’s credit, she also tries to weave in a pro-immigrant statement through messages of tolerance and community, what with Kate and her family having migrated from Yugoslavia to London to escape the war. It should also not come as a surprise that director Paul Feig tries to recapture some of the magic of the classic holiday rom-com ‘Love Actually’, though let’s just say we’d take the latter over the former anytime.

Because Tom is a deliberately elusive character, there is little Golding can do or does to make him feel more convincing. Much, if not most, of the film therefore rests on Clarke, who demonstrates a heretofore unseen goofball energy. Clarke is sharp and engaging even as the material isn’t, and is the reason why, if at all, the film wins you over. Thompson brings her trademark warmth to moderate the role of Kate’s overbearing mother, and Yeoh gets to toss some witty lines, but Clarke holds the movie all together with bright, buoyant aplomb.

You should already know if you’re the sort who loves such movies, and if you do, ‘Last Christmas’ probably will do no wrong. The London setting is infectious, and the mood is unquestionably festive, except perhaps when it unveils its pivotal twist. So yeah, if you cannot quite get enough of the George Michael heartbroken holiday classic of the same name on which the movie is based, then you certainly won’t mind this seasonal offering which mixes the sweet and bittersweet into one big Christmas bonbon.

(As artificial as such holiday movies come, 'Last Christmas' mixes the sweet and the bittersweet into a familiar yet effective Christmas confectionery) 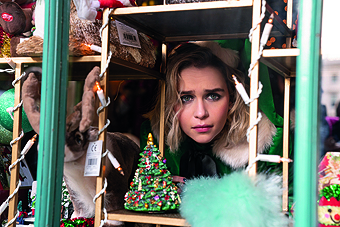