Synopsis:  Pearl Studio and DreamWorks Animation’s co-production Abominable takes audiences on an epic 3,000-mile journey from the streets of Shanghai to the breathtaking Himalayan snowscapes. When a mischievous group of friends encounter a young Yeti, they embark upon an epic quest to reunite the magical creature with his family at the highest point on Earth. But the trio of friends will have to stay one - step ahead of Burnish (Eddie Izzard), a wealthy man intent on capturing a Yeti, and zoologist Dr. Zara (Sarah Paulson) to help Everest get home.

Had it not been for the news that the movie has been banned in some of our neighbouring countries for depicting China’s nine-dash line, we probably would never noticed the particular map of contention. That certain audiences around the world won’t be able to see ‘Abominable’ is a pity, for it tells a universally relatable, appealing and touching story of a teenager who discovers an unlikely friend and goes on an adventure that eventually teaches her some valuable life lessons.

That teenager is the scrappy tomboy Yi (Chloe Bennett), who comes across at the start as a resourceful individual working various odd jobs in order to save money for a trip around China she intends to embark on. It soon becomes clear that there is more to Yi than meets the eye – that trip was what her late father had envisioned for the family, and Yi is (not) coping with her father’s demise by distancing herself from her loving mother and grandmother.

Yi’s destiny changes the evening she meets the large Yeti creature, whom she nicknames Everest, on her roof. An opening POV sequence shows us how he had got there after escaping from a secret laboratory in downtown Shanghai, where he had been held in captivity by the nutty former explorer Burnish (Eddie Izzard) and his scheming zoologist Dr Zara (Sarah Paulson). Though initially frightened of the creature, Yi realises that he is terrified of the paramilitary forces on the hunt for him in the air and on the ground, and resolves to return him to his home in the Himalayas.

Accompanying them on the trek to the mountains is her irrepressible little cousin Peng (Albert Tsai) and her vain childhood friend/ pre-med student Jin (Tenzing Norgay Trainor), who experience along the way Everest’s nature-altering powers that make the couple of well-choreographed action sequences feel magical – including flying through the air while holding onto the stalk of a giant dandelion, surfing on a motorised boat amidst fields of yellow flowers, and gliding on koi fish-shaped clouds. The finale even offers a nod or two to the classic imagery of ‘King Kong’, and we dare say does it in such a way that is transcendent to behold.

But there is much more than just the vivid visuals to appreciate in Yi’s quest; indeed, those mature enough to grasp the emotional nuances will surely be moved by how Yi comes to terms with her personal loss, and eventually reconciles with the family who has been longing for her to open her heart again to them. Yi’s struggles are reflected in how she grapples with picking up the violin (a gift bequeathed by her dad), and that narrative device in turn translates to some soulful tunes which heighten the poignancy of her journey of self-discovery.

That ‘Abominable’ turns out as affecting as it does is credit to writer/ director Jill Coulton, a former Pixar artist whose career goes back to the first ‘Toy Story’. While the story may follow a familiar template, it isn’t afraid to handle the complexities of grief and identity, and handles these themes with surprising restraint. It is also to her credit that the movie reflects its Chinese influences in subtle yet meaningful ways, both in its depiction of Chinese landscapes (from the Huangshan mountain range to the Gobi desert to the Leshan Giant Buddha) and its emphasis on family as well as being in harmony with nature.

It’s a lovely ride to say the least, one that boasts its own unique lyricism and sweetness, and enriched by stunning animation and production design. There’s no doubt that unlike previous Dreamworks’ features (even the ‘Kung Fu Panda’ trilogy), ‘Abominable’ was intended for China first and foremost, but Coulton proves it is still possible to deliver a film that can connect to a universal audience. Comparisons with ‘How to Train Your Dragon’ or perhaps even last year’s ‘Smallfoot’ would be inevitable, but this funny, heartwarming and wonder-filled movie is utterly winning in its own right.

(Told with surprising emotional nuance and filled with breathtaking visuals, this China-centric animation about family, friendship and identity is a winning delight) 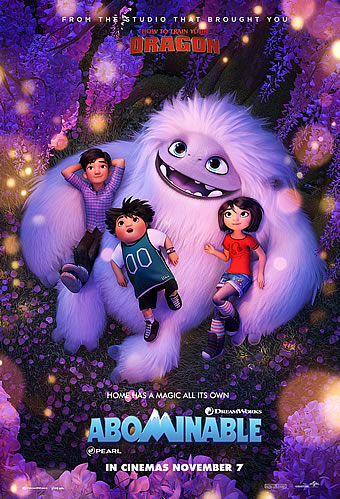 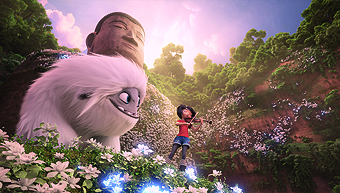