Synopsis: From master story teller, Guillermo del Toro, comes THE SHAPE OF WATER - an other-worldly fairy tale, set against the backdrop of Cold War era America circa 1962. In the hidden high-security government laboratory where she works, lonely Elisa (Sally Hawkins) is trapped in a life of isolation. Elisa's life is changed forever when she and co-worker Zelda (Octavia Spencer) discover a secret classified experiment.

You won’t find a more visually inventive filmmaker in the world today than Guillermo del Toro, but the Mexican auteur hasn’t always found the right terms of expression for his boundless imagination. Some like his Victorian gothic extravaganza ‘Crimson Peak’ are sumptuous to watch but hardly engaging; some like ‘Pacific Rim’ and ‘Hellboy’ have struggled to marry his artistic sensibilities with commercial appeal; and then there was ‘Pan’s Labyrinth’, which fused mythic archetypes and real-world cultural history into a spellbinding fable. His latest doesn’t quite dethrone his 2006 Oscar winner as his crowning achievement, but it is easily his best since.

Like ‘Pan’s’, ‘The Shape of Water’ is a period piece fairy tale, though this time the setting is at the height of the Cold War. This was a time when the United States and the Soviet Union were locked in a battle for space supremacy, a time when Soviet spies were stealing secrets from within the US Government, and a time when those who were different in society – whether by abilities, skin tones, or sexual dispositions – were regarded as misfits. Each one of these themes feature in del Toro’s film, and the way they have been so seamlessly woven together in the same narrative is a minor achievement in itself.

True to its title, the shape of the movie tends to follow that of its references. It is firstly a monster movie, most obviously referencing the Cold War-era camp-horror classic ‘Creature from the Black Lagoon’ about a strange part-human part-fish beast that was discovered in the rain forests of the Amazon. Here, a similarly humanoid amphibian (Doug Jones) has been brought into a government research lab to be studied and then destroyed. It is secondly a spy thriller, as a group of Soviet operatives in the United States – including the lead scientist at the lab, who is revealed early on to be an empathetic double agent – plot to assassinate the creature before the Americans learn too much.

But perhaps most fundamentally, it is a ‘Beauty and the Beast’ love story between the so-called ‘Asset’ and a mute young woman Elisa (Sally Hawkins) who works the janitorial night shift at the facility where it is held. In fact, this is what Richard Jenkins’ voiceover prepares us for at the start, describing ‘the last days of a fair prince’s reign’, ‘the princess without voice’ and ‘the monster who tried to end it all’ amidst an arresting image of a seemingly ordinary apartment completely submerged in water. Elisa comes up close with the priscine captive on her cleaning rounds, and her fear is quickly but surely replaced by curiosity as she senses a kindred spirit in the Asset. Before long, she is playing jazz records for him and feeding him hard-boiled eggs she brings in from home, and it isn’t hard to guess that she soon finds herself falling in love.

Her feelings for the Asset compel her to try to break him out of the facility when she learns that he is about to be destroyed, enlisting the help of her best friend and next-door neighbour Giles (Jenkins) for the audacious rescue mission. To be sure, the lovelorn, toupee-topped Giles isn’t just some convenient supporting act; on the contrary, the first act conscientiously establishes him as both a repressed gay man (whose attempt at romantic affection with a waiter at a neighbourhood diner is met with sharp rebuke) and a struggling commercial illustrator (whose meticulous paintings are gradually being replaced in ads by photography). Later on, Giles also happens to be the only person to witness the full extent of Elisa’s coupling (and by this, we mean both emotional and physical) with the Asset, and his own affinity with the Asset reinforces how his situation is also intended to represent yet another form of discrimination that Elisa and her band of outsiders face.

That del Toro should show such sympathy for those living on the fringes of society should come as no surprise, but his empathy for them has rarely been as keen or muscular as it is here. Together with his co-writer Vanessa Taylor, del Toro demonstrates emphatically how each one of his characters fights against the forces of fear, conformity and even subjugation. As much as he offers a distinct embodiment of these in the Asset’s cruel handler Colonel Strickland (Michael Shannon), del Toro also intends for his audience to confront their own unspoken prejudice – hence the scenes of Elisa pleasuring herself in the bathtub before she goes to work every evening, or that of her and the Asset making impassioned love in the bathroom of her apartment, that may seem surprising to some and even shocking to prudes, but underscore just how Elisa is no different from any other person except in speech.

Yet even though it is intended as modern-day allegory, ‘The Shape of Water’ is first and foremost an ethereally beautiful film in more ways than one. There is beauty in two lost souls finding kinship in each other. There is beauty in the combination of period accuracy and make-believe fabrication that del Toro melds with meticulousness and fidelity. There is beauty in del Toro’s love of cinema itself expressed in no uncertain terms here (from the widescreen double bill of ‘The Story of Ruth’ and ‘Mardi Gras’ in the cavernous movie palace beneath Elisa’s apartment, to the reruns of musicals like ‘Hello, Frisco, Hello’ on Giles’s black-and-white TV). And last but not least, there is beauty in the outstanding performances – whether Hawkins’s galvanising performance through gesture and bearing alone, or Jenkins’s understated one full of longing and heartbreak, or even Shannon’s darkly comic villainous act delivered with sneering menace.

Visually, emotionally, thematically and stylistically, this is a rapturous delight that confirms del Toro as one of the most creative filmmakers today. Due credit also belongs to his technical team – including Paul D. Austerberry’s production design of kitschy nostalgia and retro-futurism, Dan Lausten’s kinetic lensing, Sidney Wolinsky’s graceful editing and Alexandre Desplat’s resplendent score – which have helped bring to life del Toro’s singular vision. In ‘The Shape of Water’, del Toro has combined his love of Old Hollywood, monster movies, outsiders and love itself into a fascinating original period fantasy that is warm, romantic and thrilling. It is easily one of the very Best Pictures of the year (as its number of Academy Award nominations will attest), but even more, it is by far the Best Picture in terms of beauty, novelty and humanity.

(Brimming with imagination, emotion and compassion, this is easily the most beautiful, original and even romantic film you’ll see this year, and is also del Toro’s very best since his 2006 masterpiece ‘Pan’s Labyrinth’) 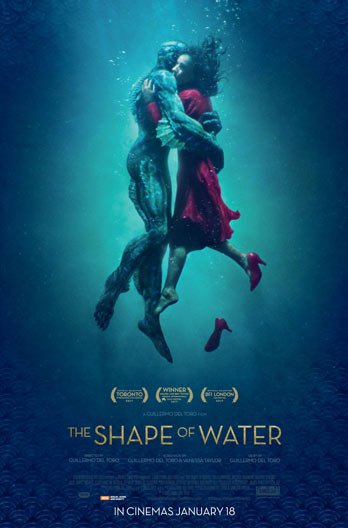 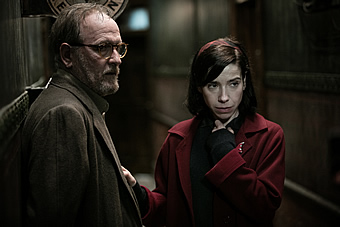